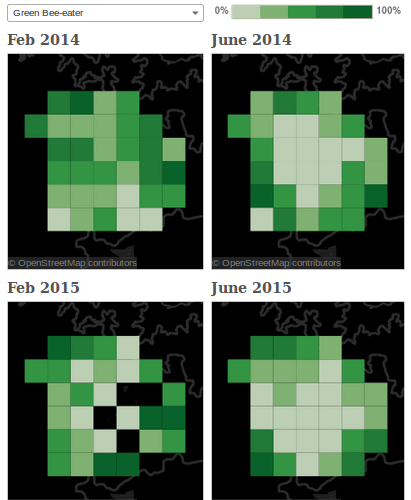 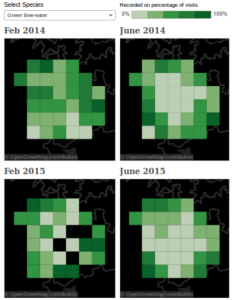 Map of distribution and frequency of occurrence of Green Bee-eater in and around Mysore city, generated from the Mysore City Bird Atlas.

The Mysore City Bird Atlas is a pioneering effort to systematically document the city’s birds. Like other systematic bird atlases, the Mysore atlas involves dividing up the area into equal-sized grids, and surveying each grid cell with equal effort, thus ensuring that comparisons can be make across space (eg more urban to less urban habitats) and across time (eg across years). More background about atlases and their utility is here.

The Mysore City Bird Atlas has now completed two years. Grids across the city have been surveyed in February and June, 2014 and 2015. This now enables a comparison of not just how bird abundances and distribution change with the seasons (summer vs winter) but also how consistent these changes are from year to year.

Do take a look at the updated Mysore Bird Atlas page to explore the patterns for yourself using the dynamic and interactive maps that have been updated to include the results from 2015.

One thought on “Two years of the Mysore Bird Atlas”