Fantastic Birds and Where to Find Them 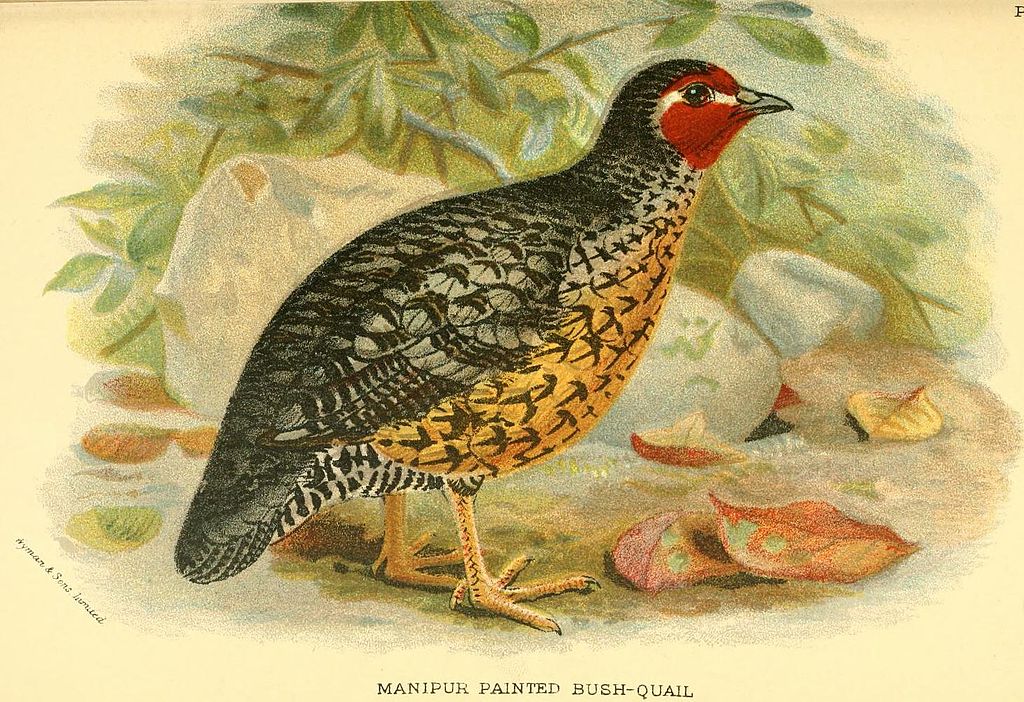 In this post, we bring you some of our resident bird species that are so rare that the number of recent reports has trickled down to a handful – in some cases nil. Finding any of these would be something to celebrate and cherish. Here are 20 of the most fantastic birds of India, with some pointers on where (if you are very lucky) you might find them!

20. Pale Rosefinch Carpodacus stoliczkae: This bird was not known from India until it was discovered in an idyllic village called Turtuk near the line of control in Ladakh. Since then, it has been found a few times but the rosefinch is not that easy to search in the cold desert. If you are acclimated well to the high altitudes and are ready to tire it out in the cold, the rosefinch may be yours.

19. Wood Snipe Gallinago nemoricola: Once widespread, reports have become few and far between. In fact, there are no recent wintering reports from the Western Ghats where it used to be annual during colonial sniping years. There are no guaranteed locations while most recent reports have been from Eastern Himalayas where it may be breeding. No golden formula for finding the species – apart from spending time in ideal habitats in the Eastern Himalayas.

18. Great Spotted Woodpecker Dendrocopos major: A very common woodpecker in Europe, the population that occurs in India is found only in a tiny fragment in Nagaland and Manipur – at the western edge of the range of the eastern subspecies. The most recent reports have been from the high-altitude regions in the Naga hills near Kiphire. While not many birders seem to have attempted to find it, the species itself should be searchable in that general region.

17. Sind Woodpecker Dendrocopos assimilis: A woodpecker that loves woods near deserts is strange enough and most of its population is outside India. The only place it is known is a vestigial patch of ideal landscape in the north-eastern Rajasthan in Jaisalmer district while it is believed to have once occurred in south-western Haryana. There does not seem to be regular active searches for this species as most areas are off-limits for civilians. Perhaps, the greening of the deserts and the canal network might actually play well for this species.

16. Chinese Francolin Francolinus pintadeanus: Like all Francolins, they are easy to detect by calls and slightly more difficult to see. The only known area within our limits are the eastern slopes of Manipur of Chandel district towards the international border at Moreh. Another species, if searched well, can be rewarding.

15. Elliot’s Laughingthrush Trochalopteron elliotii: The species must be occurring along the higher reaches close to the McMahon line (Line of Actual Control) in Arunachal Pradesh while the only reported occurrence has been from Upper Dibang valley past Anini. A targeted search in ideal habitats should yield this species more often and regular haunts may be discovered soon.

14. Stripe-breasted Woodpecker Dendrocopos atratus: A woodpecker that loves higher altitudes. Due to the confusion with the similar Fulvous-breasted Woodpecker, reports have been hard to evaluate. It is said to occur in ideal altitudes in Meghalaya, Nagaland, and possibly (still) in Manipur. Another species that would become better known with targeted searches.

13. Long-billed Bush Warbler Locustella major:  This enigmatic bush warbler is the least known in its genus and is probably more common in the sensitive portions of Jammu and Kashmir that are off-limits for civilians. The best bet for the species would be on the Srinagar road towards Kargil (May- August) where Osmaston and Whistler found it multiple times in the 1920s.

12. Nicobar Sparrowhawk Accipiter butleri: There is of course the access factor here as the species is restricted to the central Nicobar islands while the other complication is the similar-looking Accipiter hawks (Besra, Chinese & Japanese Sparrowhawk) that are also found alongside. Sight reports are hard to evaluate, and some of them most certainly relate to other species – but with the right access, this species should not be difficult.

11. Hume’s Pheasant Syrmaticus humiae: Pheasants need time in the field as well as help from local people to search – this species is one great example. While it is believed to occur along the high ridges of Manipur and Mizoram, there are only very few known photographs from India in recent times. Most evidence of its presence has been from local people, mostly hunters, who find it more often than tourists.

10. Grey-bellied Wren-Babbler Spelaeornis reptatus: An enigmatic wren-babbler, believed to be restricted to the right altitudes in Namdapha (extralimital in Myanmar), finding this bird needs a combination of permits, will, and luck. It is known to science only from two specimens while it is believed to still occur in the Noa-Dehing valley. There is much to be explored and its habits and habitats need documentation.

9. Boreal Owl Aegolius funereus: A very widespread Palearctic owl – known only from a couple of specimens from the Lahaul-Spiti region of Himachal Pradesh. Nocturnal birds of cold deserts are little known and it might be more widespread in ideal habitats of the Western Himalayas in low densities.

8. Mount Victoria Babax Pterorhinus woodi: Known only from Mount Victoria in Myanmar and Blue Mountain National Park in Mizoram, it is strange that there are no recent reports within India while several specimens have been collected in the 1950s. It is probably time that regular spots are located as it cannot be so hard to locate a laughingthrush!

7. Clicking Shrike-Babbler Pteruthius intermedius: (Previously known as Chestnut-fronted Shrike Babbler). A bizarre case where a subspecies is known only from a single specimen from the Garo hills, with the nearest range much further east in eastern Myanmar – well, a shrike-babbler population has to be resident! Very targeted searches to high altitudes of Nokrek National Park (e.g. Tura peak) should be made to locate this population before it’s lost.

6. Green Peafowl Pavo muticus: Probably regionally extinct but some reports, either wild or naturalised, seem to come up once in a while from the eastern border regions of Manipur and Mizoram. Being a peafowl, some amount of conservation would be enough for it to thrive and start occupying its old territories in the Indo-Myanmar border.

5. Jerdon’s Courser Rhinoptilus bitorquatus: Despite being so close to regions of high birding density in southern India, this nocturnal bird has not been found since 2008. Habitat transformation in its stronghold is considered one of the reasons for its disappearance but there is hope that the bird may be found in adjoining areas with ideal habitats. A search would require a multi-pronged approach – camera traps, automatic call recording, searches through local people, birders exploring new areas in the night, GIS mapping, etc. We cannot afford to lose this species.

4. Manipur Bush Quail Perdicula manipurensis: No independently verifiable report since 1932 – this quail is related to the Painted Bush-Quail of the Western Ghats and is said to have two populations or subspecies – one north of Brahmaputra and another in the Manipur valley. While there are some reports in the 1990s and 2000s from north of Brahmaputra, hard irrefutable evidence is lacking. It is also believed that some of the Jungle Bush-Quail reports from Assam, a species that otherwise do not occur so far east could have been this species. This bird needs sustained, multi-year search in ideal grassland habitats and connections with local people of the region.

3. Masked Finfoot Heliopais personatus: While the best-known population is from Bangladesh’s Sundarbans, its continued presence in India is much in doubt – the last reliable report being in the first decade of 20thC. There have been some claims thereafter from Assam/Arunachal region and there is a glimmer of hope that it may be found in some remote jungle wetlands in Arunachal Pradesh. However, its habitats, which it used to share with White-winged Duck, has rapidly disappeared. Hence the chances of finding it again within India is bleak, but who knows.

2. Himalayan Quail Ophrysia superciliosa: Not reliably known since 1876, it is widely believed that the bird may have become extinct. Ideal habitats (grassy slopes) for the quail might still be present in Kumaon and Garhwal regions of Uttarakhand, a habitat more similar to what Cheer Pheasant prefers, and focused searches with camera traps may prove to be successful.

1. Pink-headed Duck Rhodonessa caryophyllacea: Definitely the species that most agree that we have lost. There is some hope that it may be found in the wetlands in northern Myanmar, but there is no habitat available anywhere in India where this species may be found. The only hope may be to first find a wild population and then introduce it in India after captive breeding.

There are a few honourable mentions that nearly made it, in no particular order viz.  Hume’s Treecreeper, Hill Prinia, Golden-crested Myna, Australasian Grass Owl, Pied Triller, Chin Hills Wren-Babbler, Tawny Owl, Banasura Laughingthrush, and Narcondam Hornbill. Great Nicobar Crake would have certainly made to this list but it remains undescribed and hence not a valid species. Of course, the list will be greatly enhanced if migratory birds are included.

Which of these are you planning to search for? Drop a note in the comments below!

It was a fantastic read! I used to think the Western Tragopan was one of the rarest birds, but this list is life goals!

Would love to look for the boreal owl!

These photos are excellent, every one of these. This is going to attract more and more people to work with nature and ultimately strive to conserve our biosphere.

Green peafowl not found in India!!!!!!

See some discussions about its presence in Manipur & Mizoram
https://www.facebook.com/tlana.zathang/posts/2626015364094341

Do join the searches to find one last, isolated population – in some remote corner of a NE Indian hill state. This post is calling all those brave souls, who believes our birds still survives, somewhere, waiting to be discovered. 🙂

Saw of lot of green peafowls at Baluran National Park in East Java. Mostly savanna . Bit different from the eastern himalaya habitat of the “Indian Population”

Love to go looking for himes

With my limitations I would be restricted to Himalayan Quail as it is the nearest one for me. Very useful article.

Yeah , good one , but , i have seen stripe breasted woodpecker