The Jungle Babbler and its Six Sisters
v 2
Popular Species Identification
May 26, 2017

The Jungle Babbler and its Six Sisters

Almost anywhere across the length and breadth of India, you are likely to come across a group of noisy birds usually hopping about on the ground or close to the ground, occasionally creating a nuisance and bullying everything else out of their way. Few groups of birds are quite as entertaining and boisterous as the turdoides babblers of our country. Additionally, all of these species are endemic (or near-endemic) to the subcontinent.

You can also check out which species to expect based on the region of the country you’re in or the habitat you’re birding in.

Here’s a quick look at these babblers and some of their distinctive features: 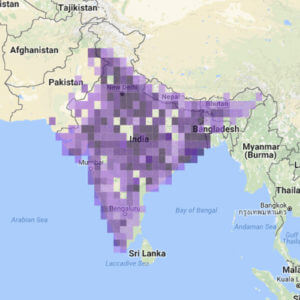 This is the babbler species one is likely to encounter in most of India. Because it is so widespread, it is worth familiarising oneself with this species before moving on to the others (Note: In some places, the Yellow-billed Babbler may be more common, while in others Large Grey Babbler may be more likely).

The Jungle Babbler is a plain-looking babbler with a compact built, and conspicuous pale eyes. The yellow bill is similar to that of the Yellow-billed Babbler. The plumage is grey, shades of which vary from region to region, with bits of brown and buff on the underparts.

The typical Jungle Babbler habitat would be open woodlands, shaded gardens and parks, scrub, edges of forests and cultivation. The Jungle Babbler is common around human habitation and often seen foraging on leftovers from households. 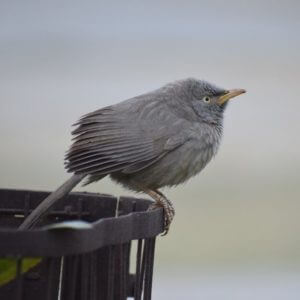 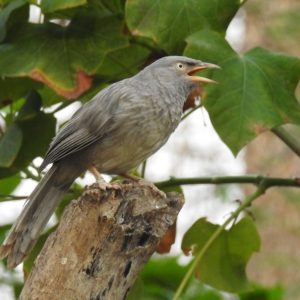 See this article for more on the various races of the Jungle Babbler.

The call is a distinctive wheezy chatter with a mix of harsh notes, and heard often if there is a flock in the vicinity!

In many parts of south India, the Yellow-billed Babbler is the dominant species. This species can look very similar to the Jungle Babbler in size and shape; but its distinct white cap, pale bluish eyes, pale wing panels and the light grey on tail and rump with the contrasting dark tail tips set it apart. 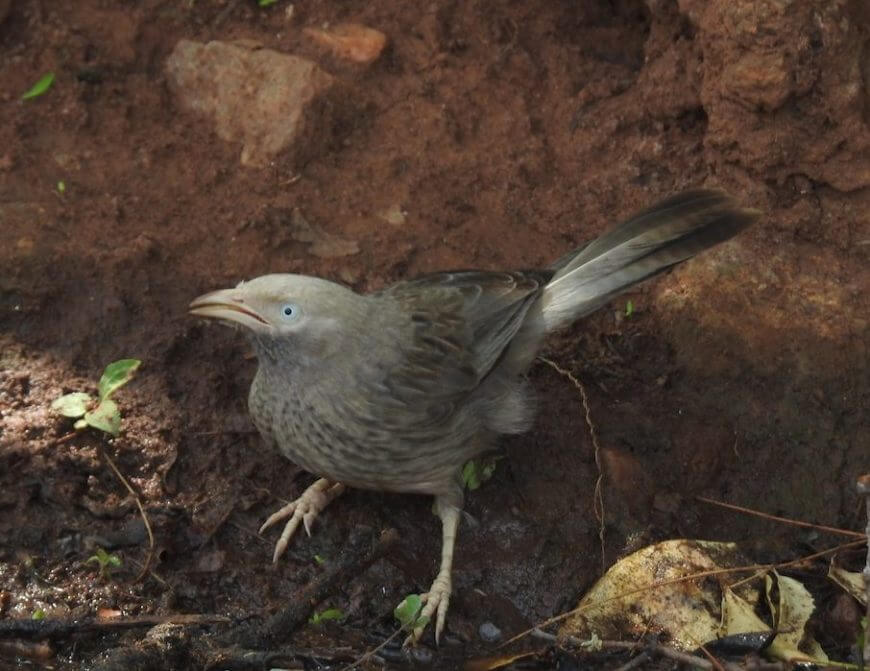 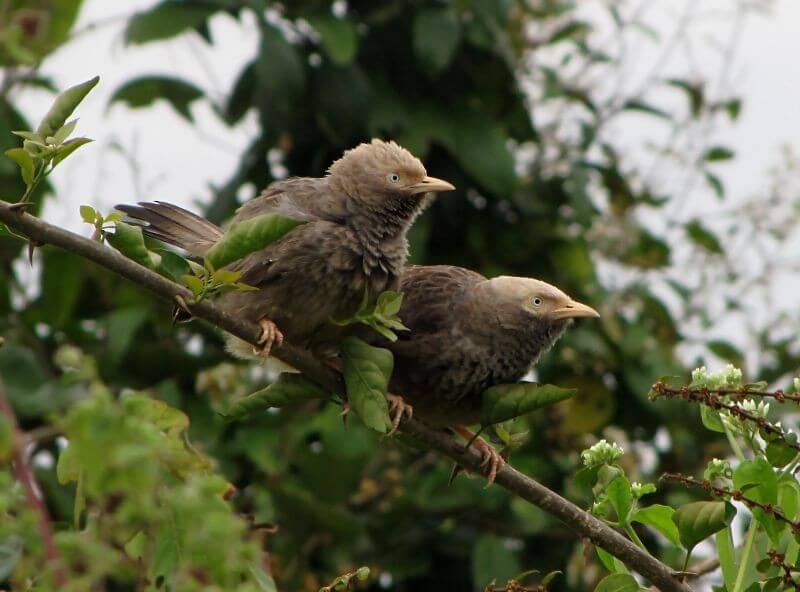 The call, a high-pitched tinkling trill, is very different from that of the Jungle Babbler and is usually the best way to tell the two apart if the bird hasn’t been seen too well.

The range of the Yellow-billed Babbler is more restricted (its northern limit reached the southern edges of Maharashtra and Chhattisgarh) than that of the Jungle Babbler. Habitat-wise, it prefers drier, more open habitats than the Jungle Babbler (but often shared with Large Grey Babbler) and thus, is more common in much of the Deccan as can be seen from the maps below:

It is quite likely that, every now and then under certain circumstances, one will encounter a flock that is hard to put down to the exact species. In those cases, please do make use of the Jungle/Yellow-billed Babbler slash on eBird.

By call – Rufous Babbler (When not separable by range, note that the Rufous Babbler’s call has a shorter, higher notes and the faster trilling can be quite discernible) 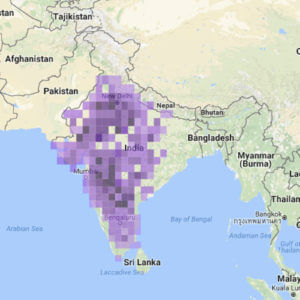 The Large Grey Babbler is the largest of the turdoides babblers mentioned in this article. They are generally the most gregarious of the babblers, forming noisy flocks of up to 40 birds. Even from a distance, one can often tell them apart by the obvious white edges to their long tails as they move about in a seemingly weak and clumsy flight – usually from a spot close to or on the ground to another spot that’s at the same elevation. Up close, they usually look “angrier” than all other babbler species by the virtue of having black lores, pale yellow iris and a very pale forehead that accentuates their features.

The Large Grey Babbler has a fairly distinctive call, though not especially dissimilar from a Jungle Babbler’s to a first-time observer. The call tends to be a very harsh nasal bleating that is more incessant and monotonous than that of the Jungle Babbler. 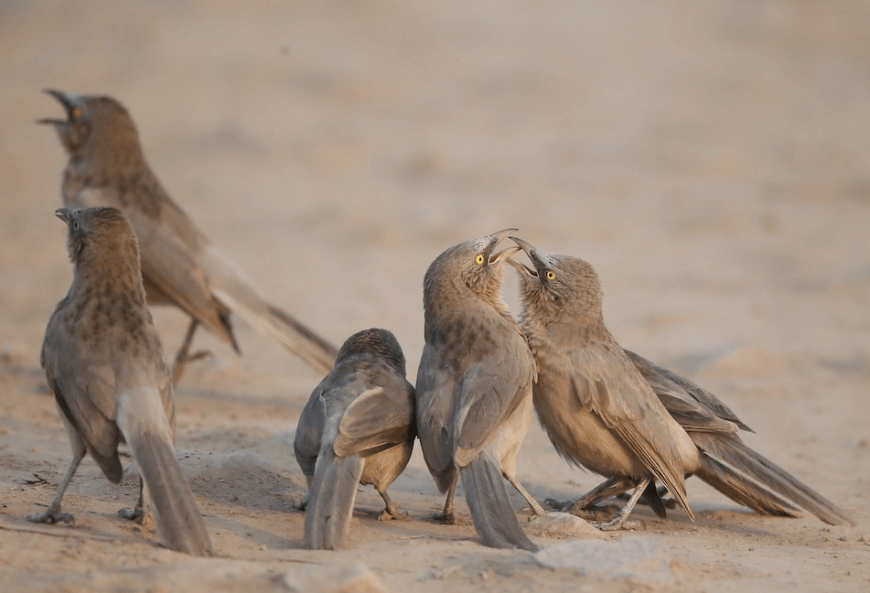 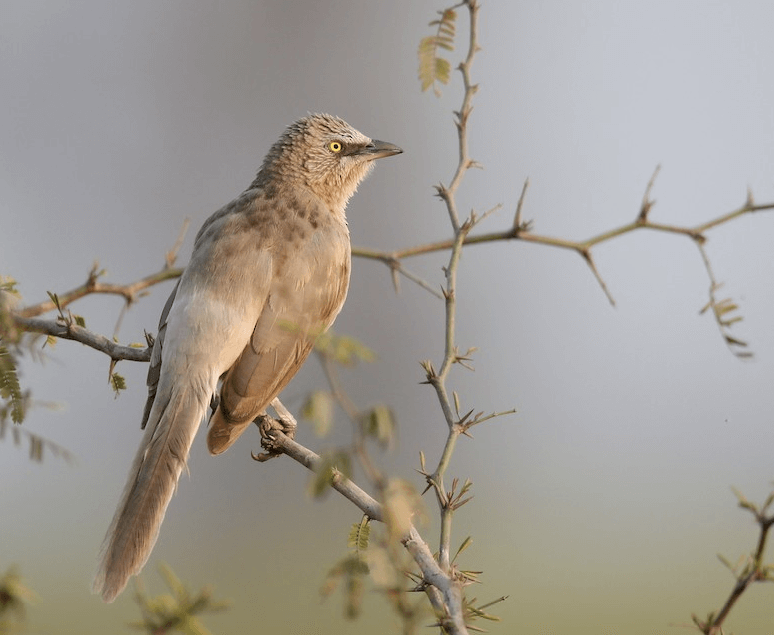 The Large Grey Babblers are a bird of open habitat and range throughout most of India. They frequent farms, fields, arid scrub and even bigger city parks and spaces with fewer trees. In many places, they share the same landscape as the Jungle Babbler but their habitat preferences are such that the two species are rarely encountered together. This is not the case for Yellow-billed Babblers, however, and the two species may have an overlap where cultivation gives way to scrub or in parks and gardens where ranges overlap. For some reason, the Large Grey Babbler is often found in urban centres in N India, but is more a bird of rural areas in S India.

They are also likely to occur alongside Common Babblers, which see.

By plumage – Jungle Babbler and Yellow-billed Babbler (See notes above)

The Common Babbler is a slender and slim turdoides babbler that is characterised by a rather long tail, overall pale/light colouration, a slim bill, streaks on the upper parts (the head, the mantle and the back), dark eyes, and a contrasting whitish throat. 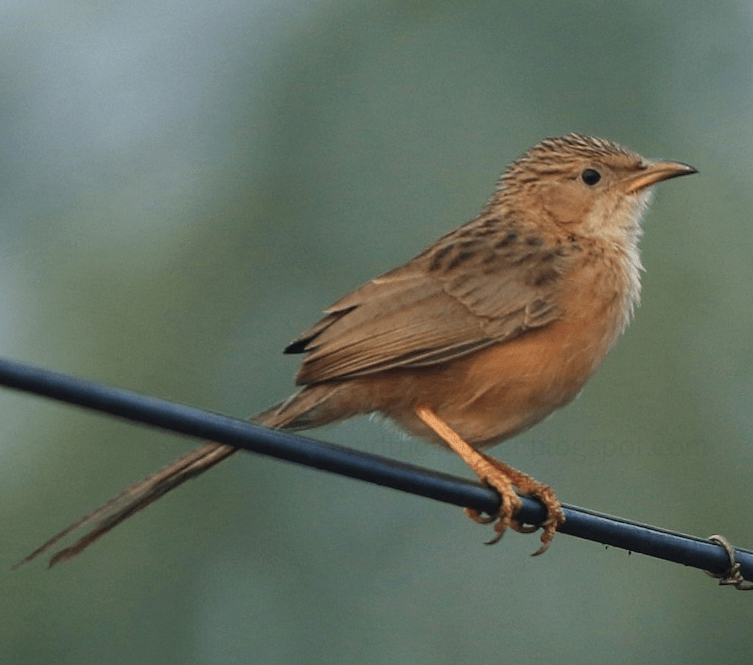 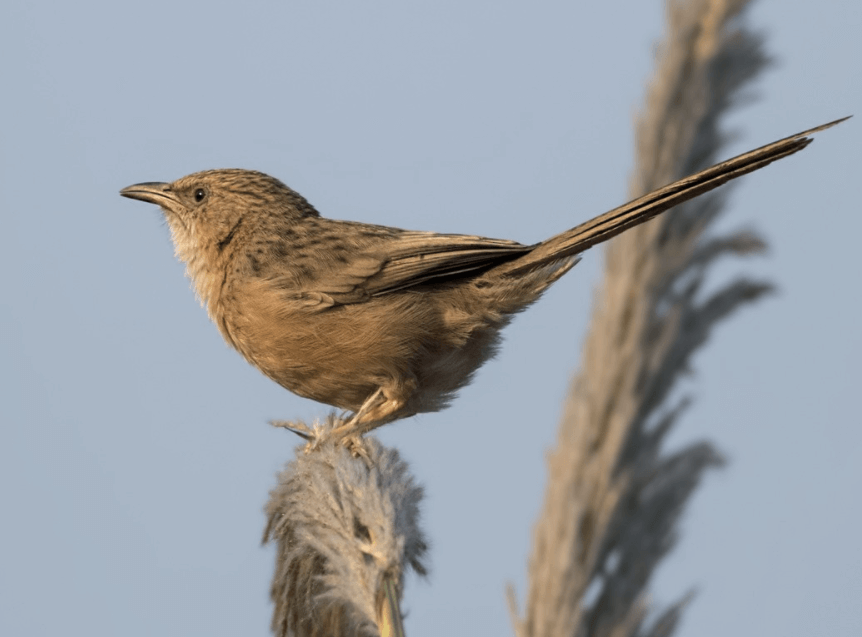 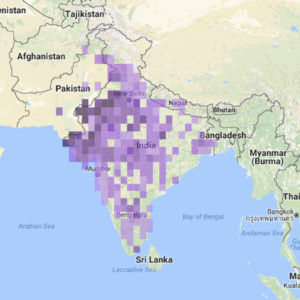 It moves about in flocks of anything between 5 to 20 (or maybe a bit more!) birds, and comes across as a babbler with milder temperament than that of its cousins. The Common Babbler dwells close to the ground, and can be seen scurrying around like a small mammal.

The call of the Common Babbler is pleasant to the ears, and not as harsh or aggressive as the three turdoides species which have been described above. In its habitat, it is the only babbler to give such a call – a series of mild and musical notes, though one may do well to be wary of the similar sounding Yellow-eyed Babbler, which often occupies similar habitats too.

The Common Babbler is often derided for having a name that does not truly depict its status in large parts of its range. However, it is locally common in its preferred habitat which is usually open fields often interspersed with rocky outcrops and boulders, or stony hills, cultivation, semi-arid regions and dry scrub. These habitat preferences allow it to overlap with the Large Grey Babbler and the Yellow-billed Babbler, from both of which it is easy to distinguish by sight and call.

By plumage – Striated Babbler may resemble the Common Babbler. However, the former is distinguished by its darker plumage, streaks on upper- as well as under-parts, stronger bill, eye colour and habitat. (Note: Although the habitat is indicative in most areas, birds have been found close to each other where riparian wetlands with reedbeds meet cultivation, especially in the floodplains of N India.

By call – Not unlike Striated Babbler to a first-time observer, but dissimilar in quality, tone and rhythm to an ear familiar with either or both species. Also see some variations of the calls of the Yellow-eyed Babbler. 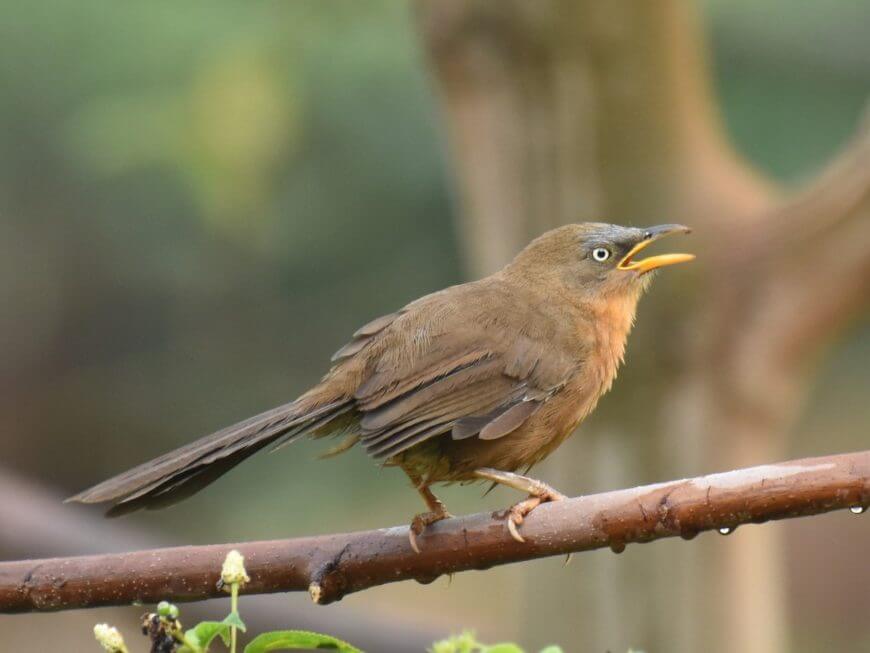 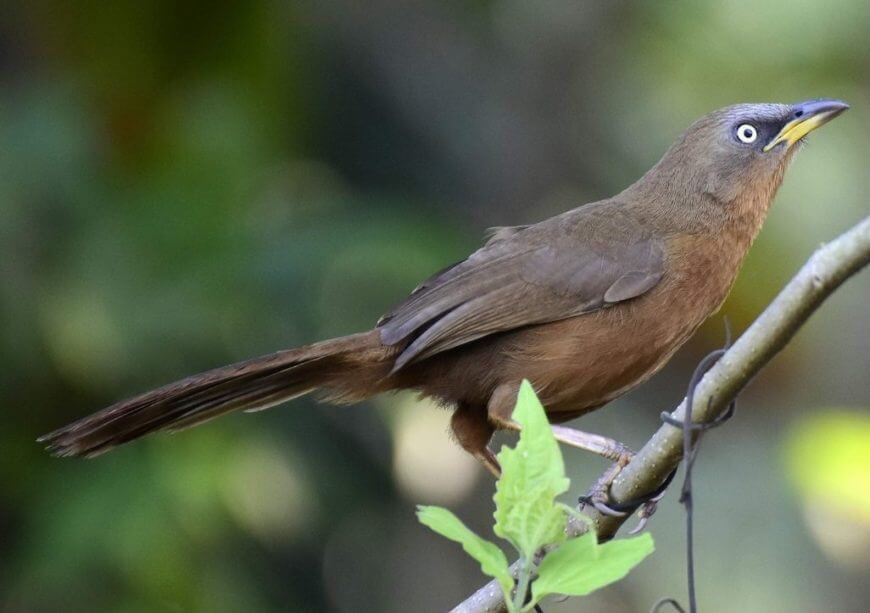 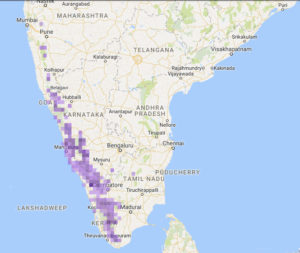 The call of the Rufous Babbler is a highly metallic trilling that changes pitch very often. To some, it may sound quite similar to a Yellow-billed Babbler which does overlap in range and habitat (although rarely).

The Rufous Babbler is endemic to the Western Ghats. Within its limited range, it frequents the undergrowth and bushes of wet forests, tall grass and scrub in wet regions (including shola grasslands), bamboo forests, plantations such as coffee and tea, etc. In some areas of its range, it can be quite confiding and unmindful of human presence and habitation.

In its lowland habitats, it shares space with the Jungle Babbler, from which it can be told apart easily by call as well as sight.

By call – Call is very similar to that of the Yellow-billed Babbler, which see.

The Striated Babbler is a rather handsome looking turdoides with its yellow iris, proportional built (stronger, bulkier and shorter-tailed than Common Babbler), consistent and heavy streaking on upperparts as well as visible streaking on underparts, darker plumage than its congeners and a distinctive, long pale bill. Although occurring in flocks of upto 15 birds, its can remain quite inconspicuous in its habitat when its not calling. When in call, however, they often perch atop reeds and call for a long time. Feeding is usually closer to the ground. 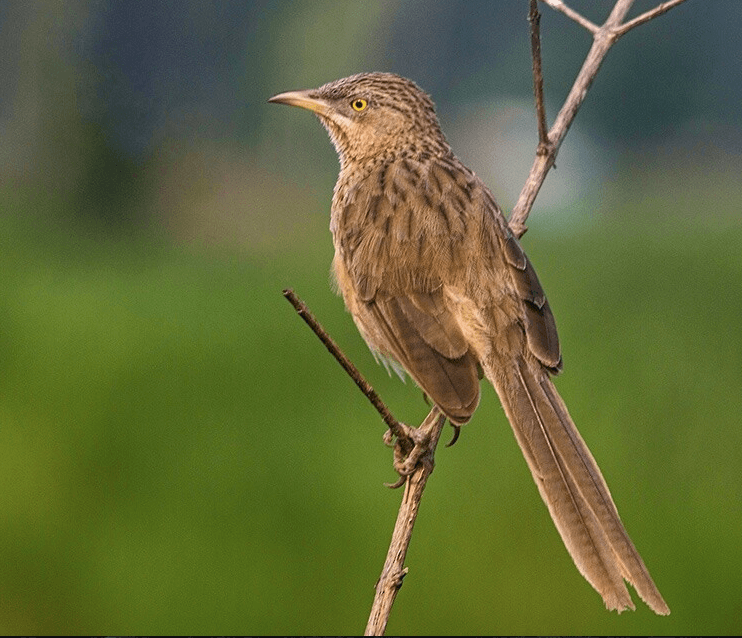 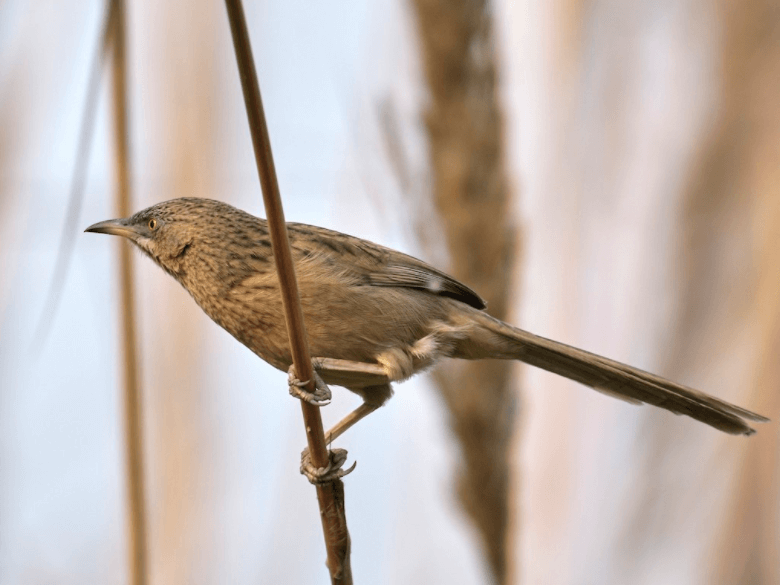 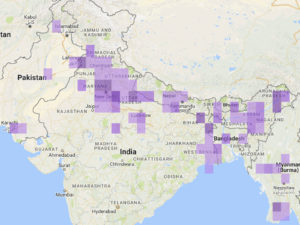 The call of the Striated Babbler is a series of melodic notes often given out in the form of a duet with the female, whose notes are said to be slightly less musical. Unlike its congeners, the Striated Babbler’s calls are often irregularly given though when excited, the birds may call incessantly anyway.

The Striated Babbler is not uncommon in wet, marsh habitat with tall grass and reeds throughout its range. They have also been observed in rice fields and cultivation close to reedbeds and rivers. In much of its range, it is the only turdoides known to frequent such habitats (the other being the much rarer and restricted Slender-billed Babbler).

By plumage – Common Babbler, which see. In parts of its range, it could be mistaken for the Striated Grassbird.

By call – Similar to Common Babbler, which see 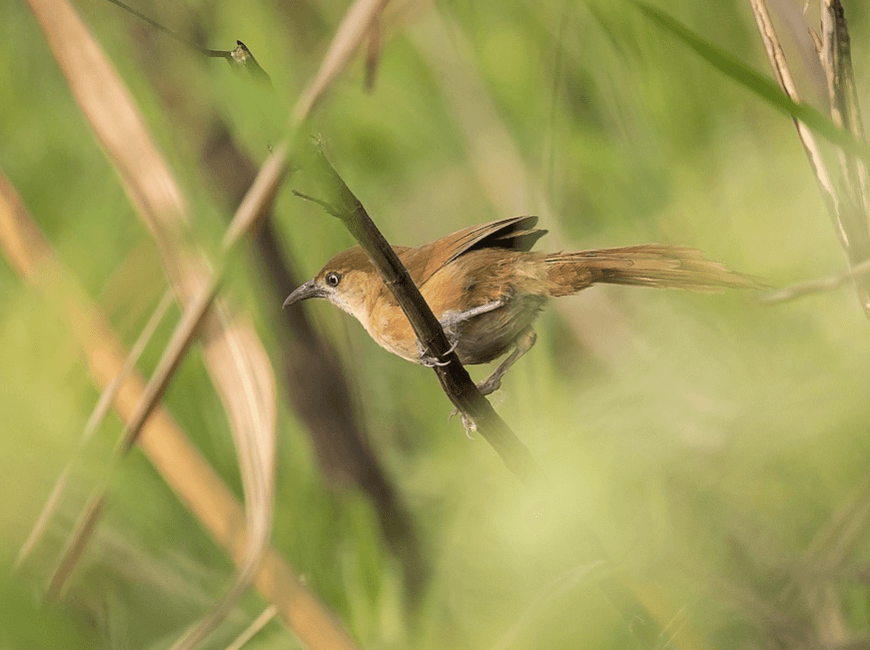 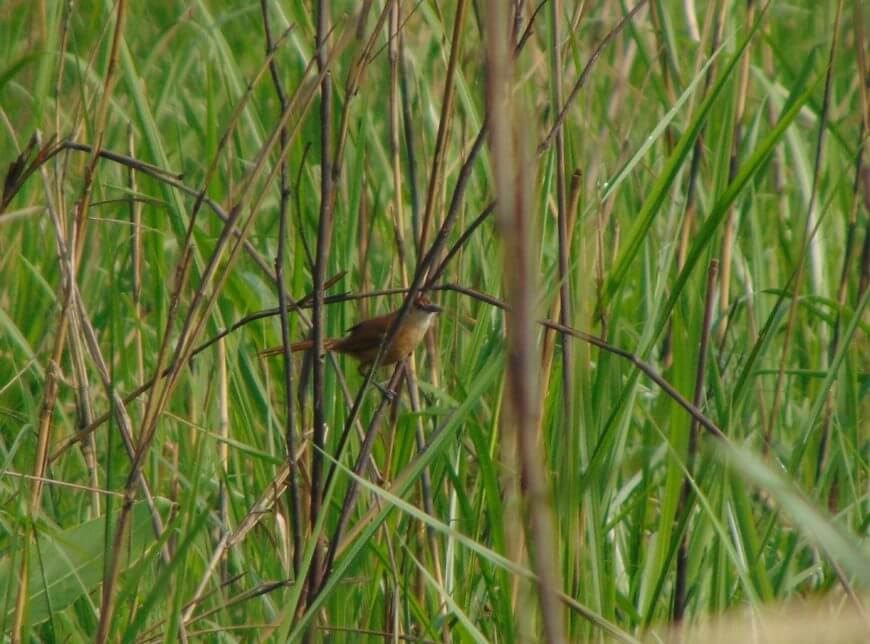 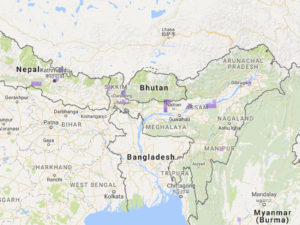 The call of this species is a series of clear, musical trills that vary somewhat in speed and pitch, and is quite unlike any other turdoides species in its range (be wary of other babblers in the habitat though – such as the Chestnut-capped Babbler and the Jerdon’s Babbler, which may exhibit similar quality of song). There are other calls, including a rich song and a harsh chatter.

The Slender-billed Babbler is largely restricted to tall grasslands in the lowlands of the Nepal terai and the Brahmaputra basin. The only other turdoides babbler it shares this space with is the Striated Babbler which differs from this species in almost all aspects.

By plumage – Unlike any other turdoides babbler, but may appear like a Jerdon’s Babbler from a distance.

By call – Again, unlike any other turdoides babbler that is likely to coexist.

North, Central and East India (west of Assam, North of Maharashtra, South of the high Himalayas, east of Pakistan):

Wetlands and reedbeds (Applicable only in N, NW and NE India):

a. Jungle Babbler and Yellow-billed Babbler 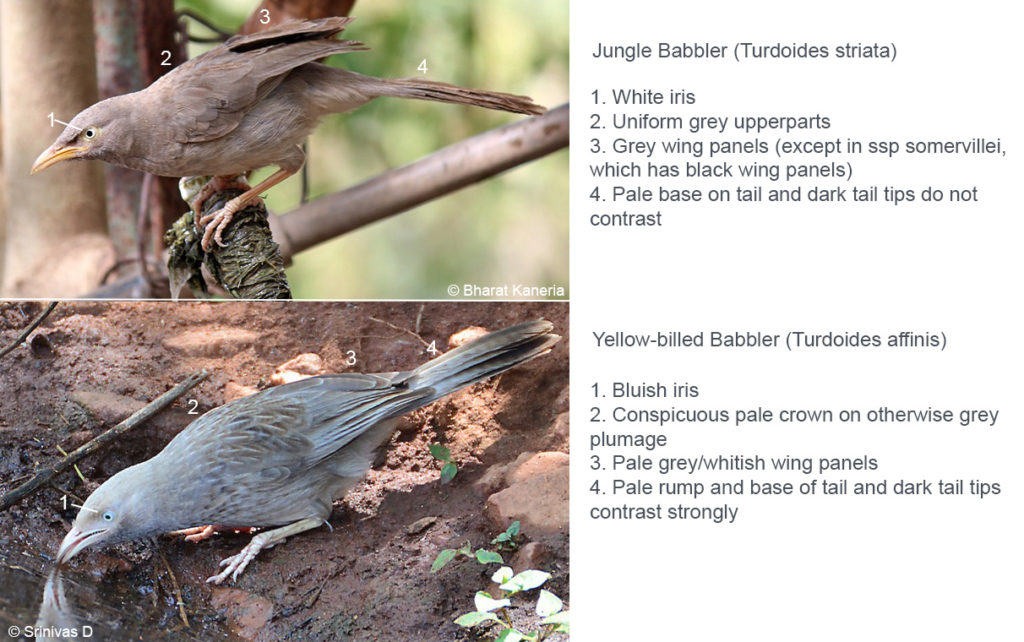