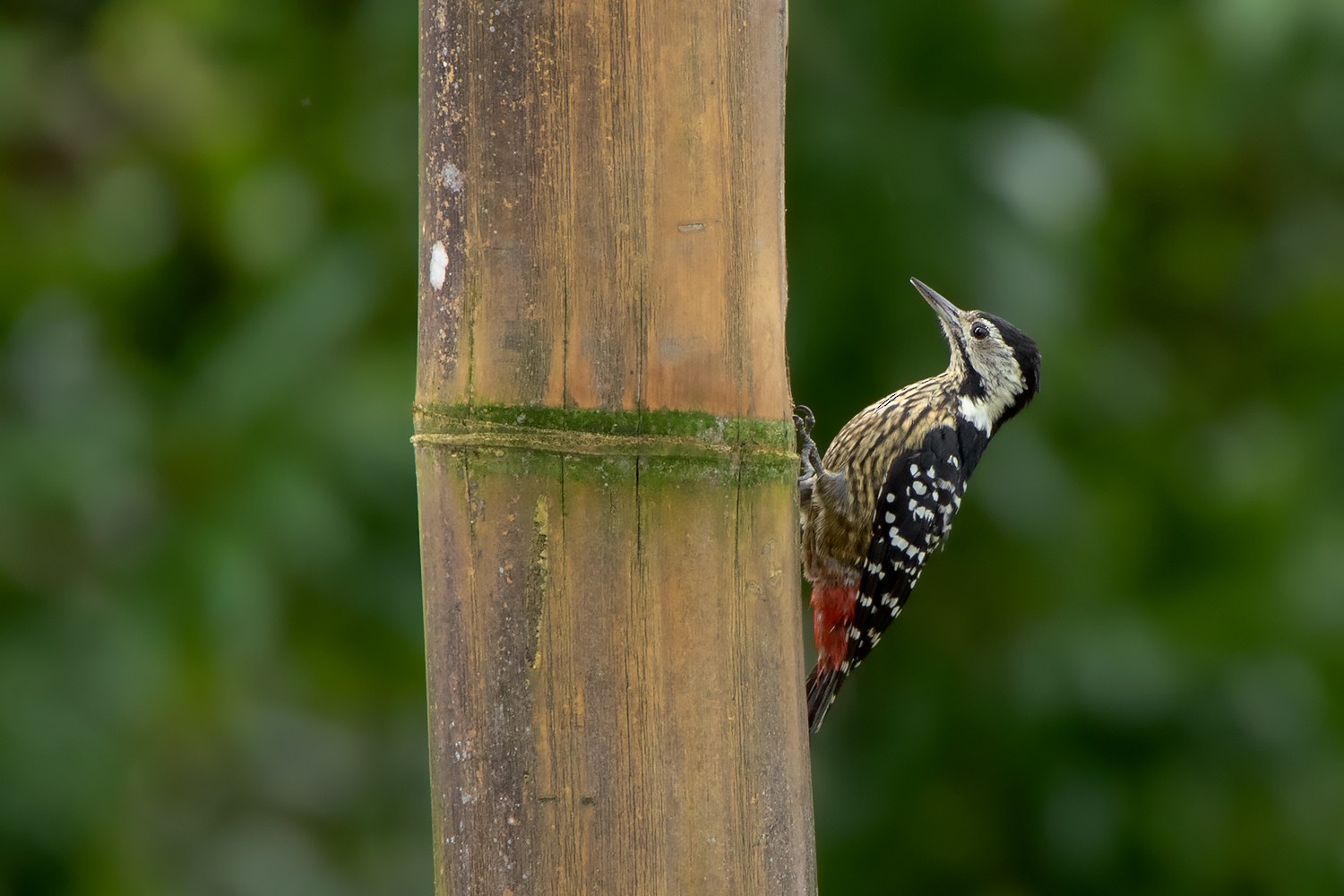 By Pritam Baruah and Ashwin Viswanathan

Fulvous-breasted Woodpecker (FBWO) and Stripe-breasted Woodpecker (SBWO) and are variable woodpeckers that form a species pair in the genus Dendrocopos. Both species can be distinguished from other similar co-occuring woodpeckers (Grey-capped Pygmy, Brown-fronted, Himalayan, Great Spotted, Darjeeling and Crimson-breasted) from horizontal white stripes on a black back, a full red (male) or black (female) crown, fulvous underparts, and an open facial pattern lacking a mask or eye-stripe. FBWO is a relatively common species in the country whereas SBWO is rare, so much so that it was listed as one of the top 20 resident birds to find in India. FBWO and SBWO are both found in India, look quite similar, and have similar vocalizations! So differentiating them in the field and even from photos can be quite tricky. How can they be told apart?

FBWO occurs throughout the Western Himalayas, and eastern and northeastern India spilling over into Myanmar, as well as down into the northern Eastern Ghats. SBWO occurs only in NE India. Despite some references suggesting otherwise, it does not occur in the Eastern Himalayas north of the river Brahmaputra. SBWO may be restricted within India to the hills of Nagaland (and perhaps southeastern Arunachal Pradesh), Meghalaya (and perhaps South Assam), Manipur, and Mizoram. So far, there is no evidence either in specimen collections or in photo libraries indicating that SBWO is distributed in the Indian Himalayas, Nepal or Bhutan. If you see a woodpecker of this species pair anywhere in India outside the previously mentioned regions south of the river Brahmaputra, you can be fairly confident that it is a Fulvous-breasted Woodpecker. 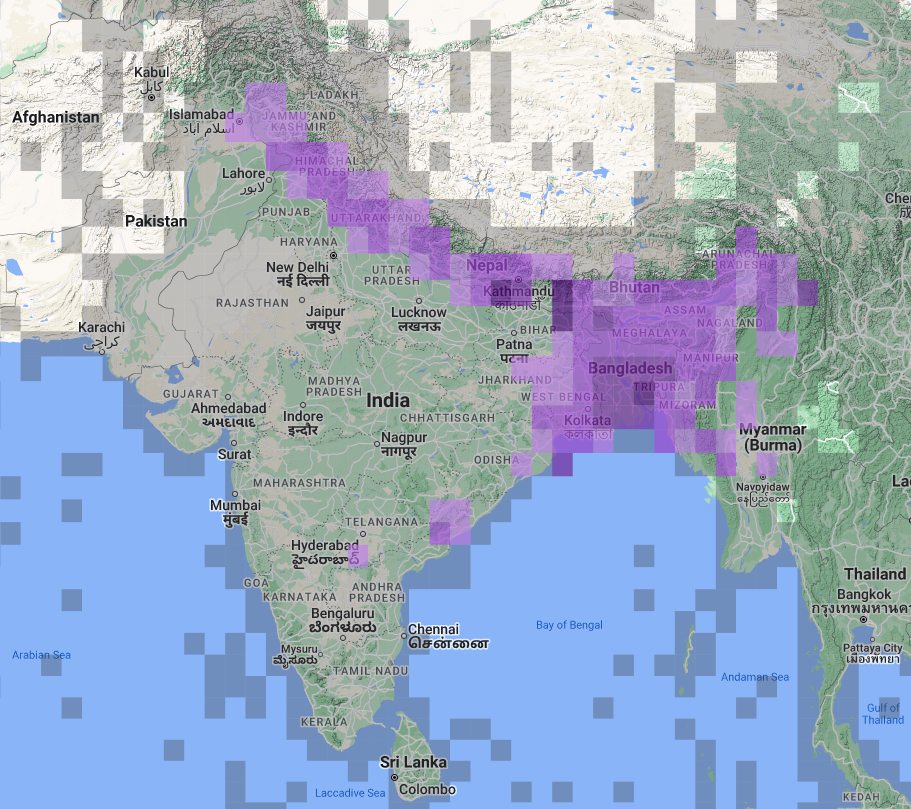 Fulvous-breasted Woodpecker range that extends from the Western Himalayas and the Eastern Ghats through NE India into Myanmar (screenshot from eBird.org) 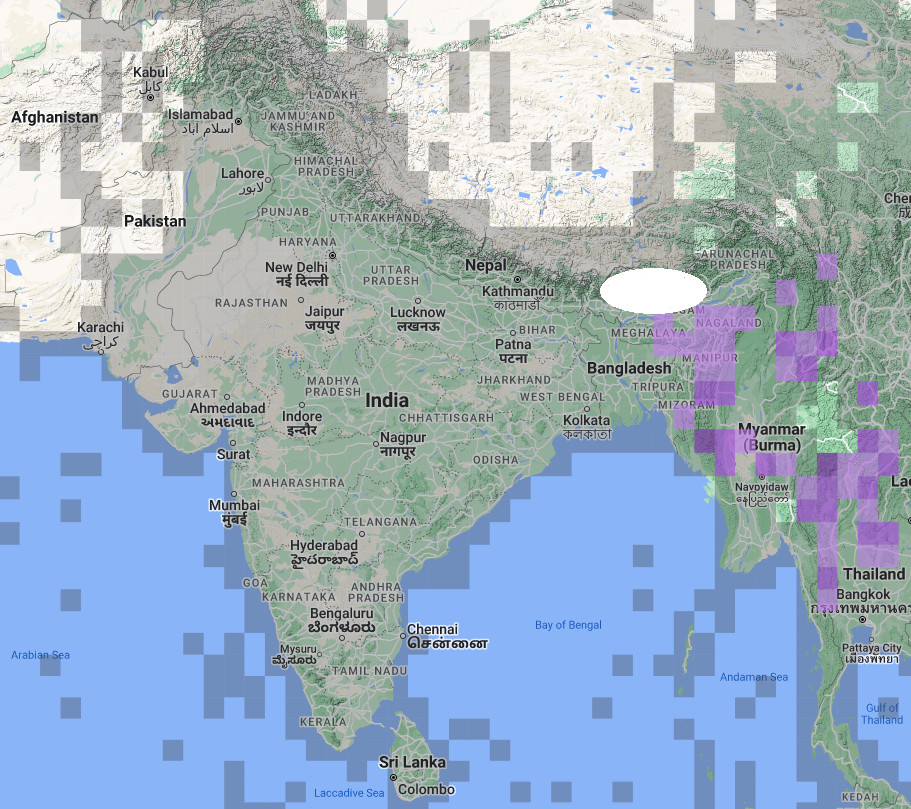 Stripe-breasted Woodpecker (SBWO) range that is currently restricted to South Assam(?), Mizoram, Manipur and Nagaland in India. The area shaded white is one of many areas where it was previously thought to occur but probably does not
(screenshot from eBird.org)

Key features that may help separate these species are summarized in Table 1.

All other field marks – vocalization, breast colour, size, bill length, width of white bars on mantle & wings, extent of red/black towards the nape, colour of underparts – are supportive but not conclusive even in combination.

A male FBWO from Darjeeling (below) where SBWO has not been documented to occur. Note that its face and neck side are whitish but with a yellowish tint. The face and neck sides would be pure white in a SBWO. Also note the sparse and thin striping on the breast, and that the crown does not appear ‘peaked’ as it does in subsequent SBWO images.

A female SBWO from Thailand (below), identified from its ‘peaked’ crown, pure white face and neck side, prominent striping from the breast to the belly, and prominent barring on the belly.

A male FBWO (below) that has an almost fully white face and neck side! But the weak to non-existent striping on the breast and a lack of a ‘cap’ (as well as the location/elevation) rules out SBWO.

A male SBWO (below) with a bright coloured and prominently ‘capped’ crown, a pure white face and neck side, and thick striping on the breast.

A female FBWO (below) without a white face and neck side, and lacking prominent striping on the breast.

A male SBWO (below) from Mizoram with a bright red crown, prominent striping and a contrasting white face.

The typical weak drumming roll of FBWO (below) usually tapers off towards the end.

The strong, hard, drumming roll of SBWO (below) retains the same intensity throughout. 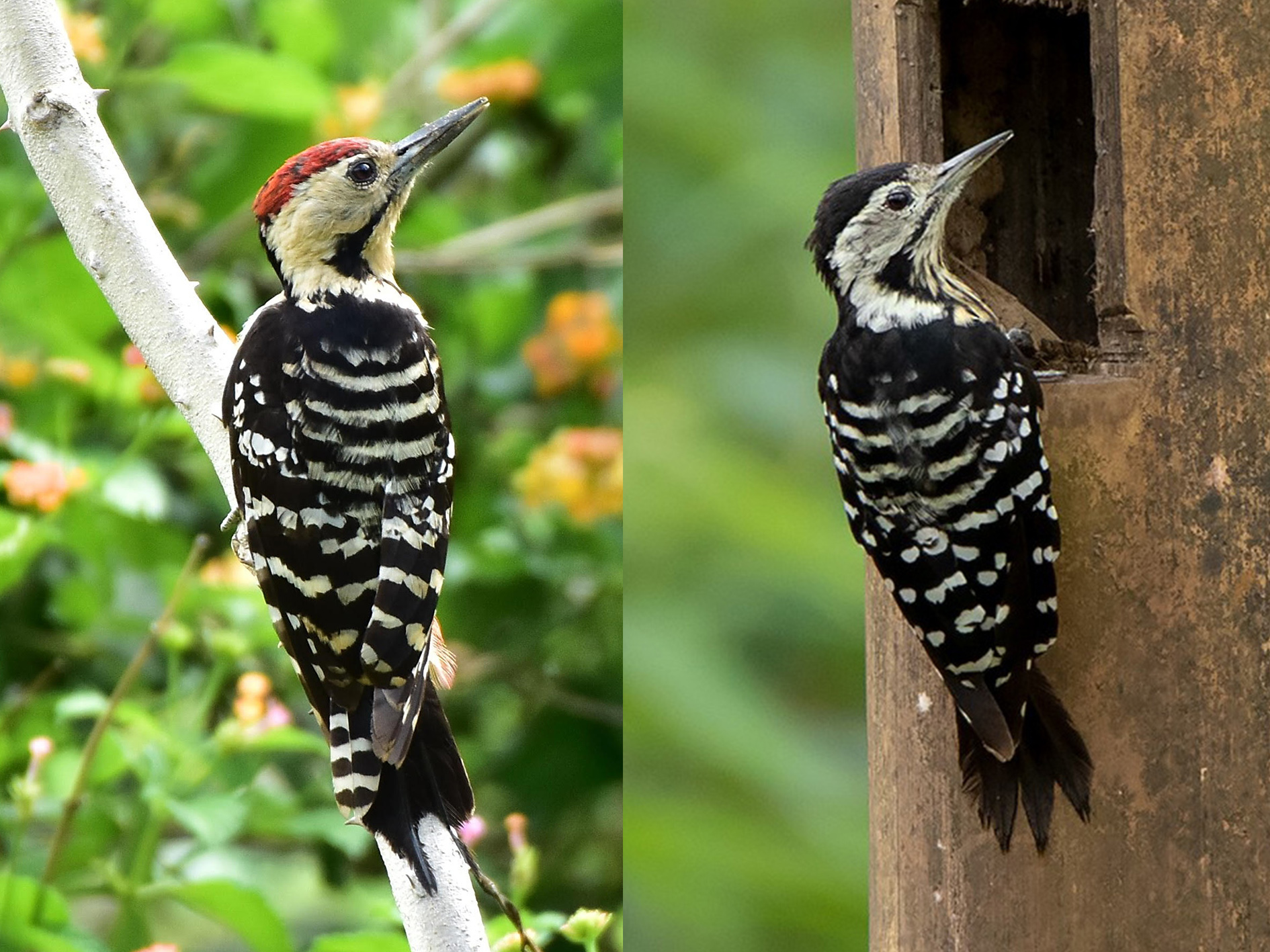 L to R: Fulvous-breasted Woodpecker (male) and Stripe-breasted Woodpecker (female). Note that there is almost no perceptible difference in the bill shape, markings on the back and upper tail, or the shape of the moustachial stripe. But the bird on the right is easily identified as a SBWO from the pure white face and neck side, prominent, thick striping on the breast, and the ‘capped’ appearance (photos: Harish Dobhal and Ayuwat Jearwattanakanok)

Current valid records of SBWO are from Eastern Nagaland, Khasi Hills (Meghalaya), Manipur Hills (Manipur), and Mizo Hills (Mizoram). SBWO appears to be common at 1400-1800m in Murlen NP and 1900m in Phawngpui NP of Mizoram. In Khasi Hills, FBWO is common all the way to the highest ridge, while SBWO is rare. In summary, if you see a FBWO/SBWO in forest in mid to high elevation southeastern Arunachal Pradesh, Nagaland, Meghalaya, Assam, Manipur, or Mizoram, and either hear the characteristic drumming, or note a white face and neck sides, combined with prominent, heavy striping on the breast, a ‘capped’ crown and/or some barring on the belly/flanks, you have found a SBWO!

While our focus is on India, this article is relevant in any parts of Southeast Asia where both species co-occur. We leave you with this beautiful image of a pair of SBWO in habitat. Do let us know in comments whether this article has made the task of identifying Stripe-breasted Woodpecker in field and from photos easier!

Very informative piece. Thanks to Birdcount India team for their efforts.

It is indeed an elaborate explanation on the differences between the two species. Looking at the altitude of distribution it’s quite unlikely to see SBWO in low altitude hills of Tripura but the keeping the ID pointers in mind will always help in identifying the FBWO in a better way. But I think there is a possibility of sighting this species in Jampui Hills, North Tripura bordering South Mizoram.

Yes in Tripura, the best bet is Jampui Hills as it is an outlying range of the Lushai Hills, where the species is known to exist (at least in the higher reaches, like in Murlen NP). In Khasi Hills SBWO is found low at about 900 masl too.

Lovely write-up! Very well explained. I have some photographs of FBWO. Will check if I have the other one and let you know.