It is that time of the year again. Winter soon approaches, and birders across the country would have picked up the clues by now. All across India, wetlands now host birds from shores afar. The ones you are almost always likely to see in suitable habitat nearby are a group of birds collectively known as the waders or shorebirds.

Amongst these shorebirds are birds such as the sandpipers, the redshanks and greenshanks, stints, turnstones, sand plovers, godwits, snipes, etc.

In the first part of the series related to identifying waders, we try and tackle an often misidentified group consisting of the following common species:

Most of these birds belong to the genus Tringa, with the only exception being the Common Sandpiper – which belongs to a genus known as Actitis. All of these birds can be found in most parts of India, along rivers, in wetlands, near the coast, in estuaries, etc.

These waders have proportionally longer legs, long straight bills (with some slight curves), and are usually slender and elegant in build. The Common Sandpiper can be noted as an exception, for it has shorter legs, shorter bill, and looks a bit “crouched” and more horizontal than vertical.

The first thing when observing a wader is to see how it looks overall – which includes noting the size and shape of the body, its bill length and shape, length of legs, etc. This is very useful, as waders are often seen from a distance and may be unapproachable in their wetland habitats.

Generally, of all the waders listed above, one can easily separate Common Redshank* and Common Greenshank from the rest by their proportionally longer bills and legs, and generally larger size with longer necks and often a more elegant gait. Between the Redshank and the Greenshank, the latter has a slightly up-curved bill compared with the straight-billed Redshanks.

The Marsh Sandpiper is a very slender looking bird, characterised by its delicate build, very thin up-curved bill and long legs. Common Sandpiper, on the contrary, looks short and crouched. It’s legs appear short and the bill not as proportionally long. Green Sandpiper and Wood Sandpiper can appear similar from a distance but the Green Sandpiper is generally the stockier of the two, with a more heavy-set body and short neck.

The collage below should illustrate some of these differences: 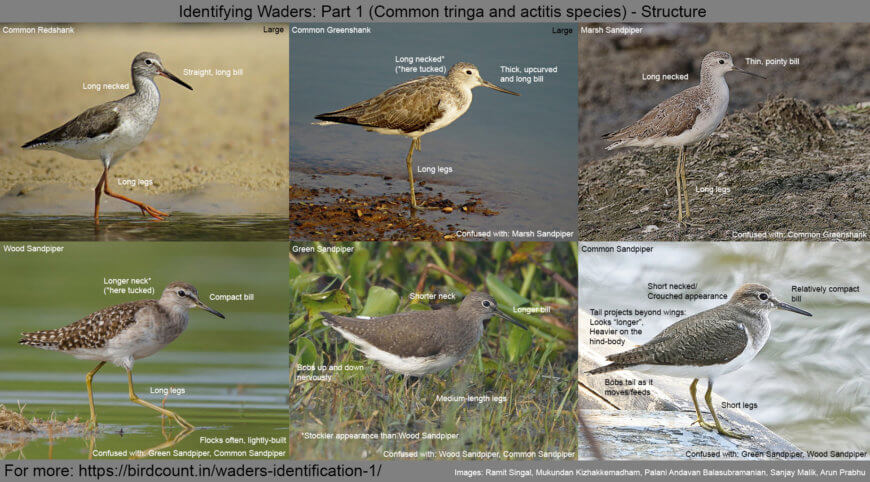 Behaviourally, Common Greenshank and Marsh Sandpiper can be similar in that they are very active feeders – often running after prey and wading in deeper waters. Common Redshank is usually in or near shallower waters. All three of these are usually solitary when feeding, but may roost in larger numbers.

Common Sandpiper is also considered to be solitary, although 3-4 (or more – up to 20) are often seen near each other, especially during passage. Their habit of bobbing their tail up and down as they feed sets them apart from the rest. Wood Sandpipers are often gregarious – and may occur in loose flocks of up to 100. Green Sandpipers are usually quite wary and also bob up and down often. When flushed from long grasses, they fly in a distinctive low zig-zag manner. All the three mentioned above are rarely seen in water – but rather on the shores/mud flats/etc alongside.

Fortunately, these common waders can be easy to tell using their plumage too – especially when seen in good light.

Their extremely pale colouration makes Common Greenshank and Marsh Sandpiper stand out from the rest. Marsh Sandpiper can be told apart by its very thin bill, orange legs (vs green) and slimmer structure. Common Redshank is greyer overall, with conspicuous red legs and red base to bill.

The Common Sandpiper is best told apart by structure. But when seen well, it shows a clear shoulder bar – a white shaft that goes up as an extension of the white underparts and demarcates the brown upperparts. Up close, the barring on the wings may also be apparent in many individuals. 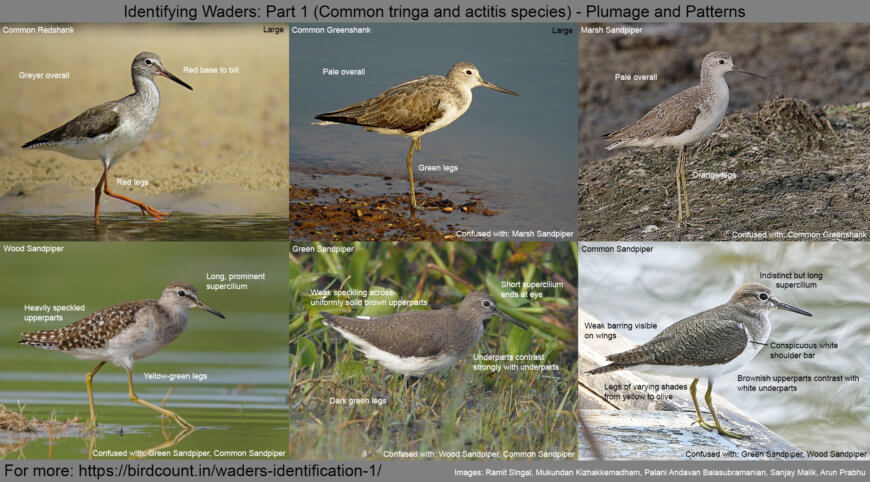 Very often, one notices these waders only when they take to the wing. This may be when a flock of birds is disturbed by a Harrier, when generally moving about or when, as often happens, the birds are inadvertently flushed by a birder (or a group of birders) approaching a waterbody.

As far as flying styles are concerned, the most obvious is that of the Common Sandpiper. The low flight (just above the surface of the water) combined with the flickering wing movements are characteristic of this species. Green Sandpipers, usually the ones who are flushed most often, have a zig-zag flight that may almost be reminiscent to that of a snipe.

However, if your position and angle affords you a good look at the bird in flight, the plumage can be very useful. Common Sandpipers are easily told apart by the white wing stripes, while the Common Redshank has a distinctive and thick white trailing edge to the wing, along with a contrasting white back.

Green Sandpipers are very dark above with a dark underwing and upperwing, a distinctively white rump and a dark tail band. Wood Sandpipers may look confusingly similar, but their underwing is pale, the upperparts and tail bands aren’t as dark and legs extend further beyond the tail.

Common Greenshanks and Marsh Sandpipers can be notoriously tricky to ID in flight. Both look extremely similar and unless a size comparison is made, or the bill is noted (thicker for Greenshank), or the projection of legs beyond the tail is observed (Marsh Sandpiper’s legs are longer and stick out further); birds in flight can be tough to put down to one species or the other. 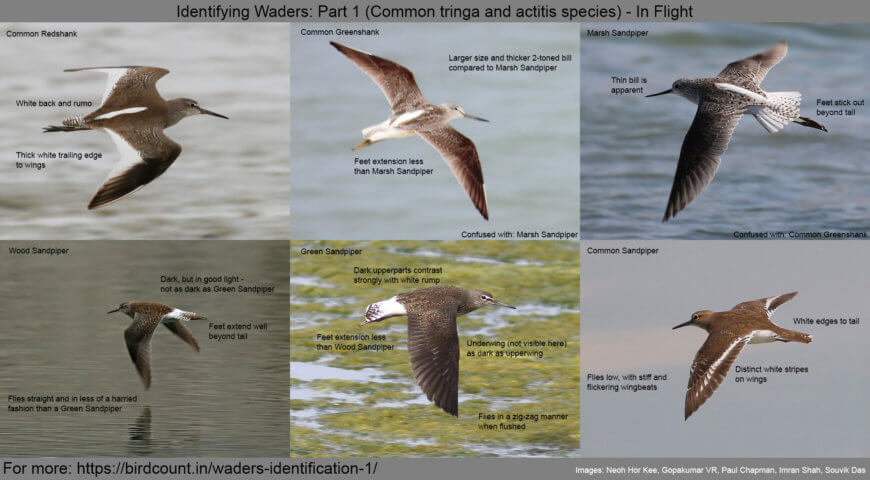 If neither flying style nor plumage helps – there is one other feature that is most useful. This group of waders is quite vocal (especially in flight) and the species can be told apart by sound fairly easily compared to other wader groups.

Each of these waders has a distinctive flight call (some more distinctive that the others) in winter.

b. Common Greenshanks and Common Redshanks have calls that are similar in quality; but with practice, one can note the difference in the pattern of the calls.

c. Wood Sandpipers and Green Sandpipers, too, are best separated by call. This is especially true when the birds haven’t been seen well.

Habitat may not always be conclusive (or even very useful!) in case of these species but it can help one know what species is more likely than the other in certain cases.

Wood Sandpipers and Green Sandpipers stay away from saline waters and are generally more fond of well-vegetated freshwater wetlands. These could be large wetlands or even a small water-filled ditch. However, Green Sandpipers almost always prefer denser vegetation – which makes them hard to spot, and will sometimes be flushed from grass-covered waterbodies in forest clearings as well.

A less common relative of the birds mentioned above is the Spotted Redshank – uncommon but widespread in the Northern parts of India, and more scarce in South India. (See distribution map on eBird)

The Spotted Redshank is a tall wader, slimmer than the Common Redshank with a longer neck and a thinner, longer bill (with a markedly downcurved tip). Although individuals can be very speckled/spotted when approaching breeding plumage (in early summer/passage – often strikingly black with white spots, making them unmistakable), the non-breeding plumage is rather similar to that of the Common Redshank.

In flight, it can be told apart from the Common Redshank by the lack of the thick white trailing edge on the wing and the white lower back contrasting with the dark rump and tail.

All in all, as is often the case in bird identification – it is a combination of features that lead to a definitive ID. This article presents these features under separate headings, but in the field – a mix of structure, behaviour, plumage, call, habitat may come in handy to be able to identify a bird with certainty when views of a bird may be brief, distant or unclear.

Nice Article. Who is the author ?

Nice helpful article specially for new birders. Continue this series, I am forwarding to our Thane Bird Count WA Group.

Thanks for summarizing the identification methods for these waders. One gets confused quite a number of times and report the wrong species. Hope this will help the birders a lot.

Can downloadable pdf and an ebook versions be also made available for those who would like to carry it?

We do not have a pdf for now but you could download the webpage to a pdf version.

Very beautiful article with such a deep study.

A very helpful article specially when we are training volunteers for Water Bird Census and Wader Watch Programs.