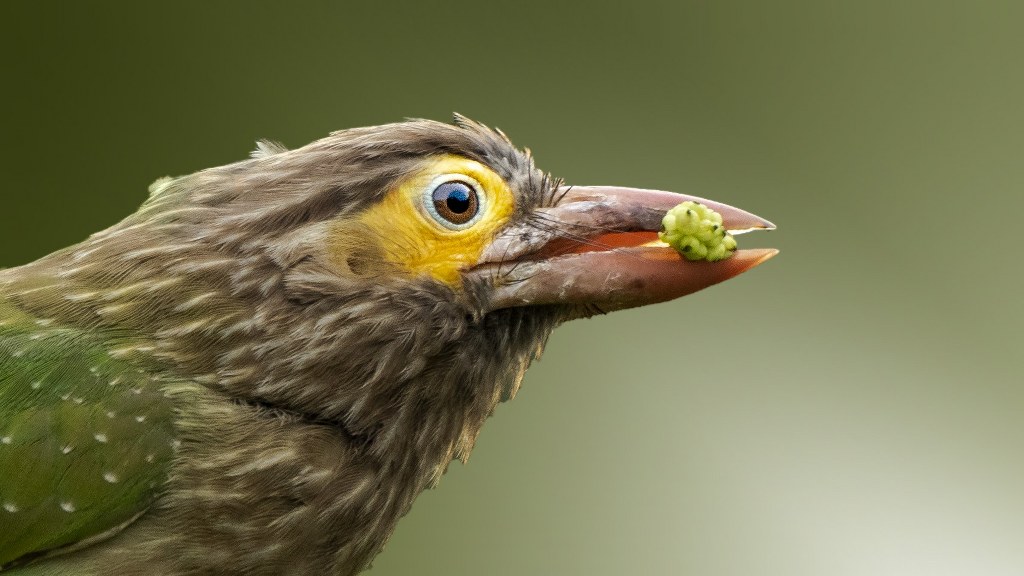 Barbets are some of the most ubiquitous of India’s fruit-eating birds, even occupying most major cities where fruiting trees remain. These sluggish, largely green birds are often heard before they are seen, their loud, repetitive calls betraying their presence in almost any Indian landscape.

India hosts 9 species of barbet in the family Megalaimidae. Two of these, the Brown-headed (Psilopogon zeylanicus) and White-cheeked (P. viridis) Barbets, occur together in many parts of peninsular India and form the primary focus of this article. Although habitat preferences separate these two species to an extent, they do overlap in parts of peninsular India. Because the green body colour of barbets camouflages them to a large extent, they are often heard before they are seen. Thus, some knowledge of the call properties of barbets (particularly frequency) is useful to identify them in the field. This, in turn, may help us more accurately understand the range overlap between these species, and whether human planting of fruit trees is bringing them further into overlap. Barbets are known to compete with each other for fruit and nesting resources (as the studies of H.S.A. Yahya in Kerala demonstrate), and studies of this sort could thus potentially prove fruitful (pun intended!).

In the north and east of India, the Brown-headed barbet also overlaps with the closely related Lineated Barbet (P.lineatus), but this will be treated in more detail in a future piece. Below, I enumerate the differences in the vocalizations of Brown-headed and White-cheeked Barbets, as a quick guide to easy field identification. Both barbets possess superficially similar vocalizations, forming some version of the sound ku-troo, and this may be confusing to the listener at first. Adding to this is the fact that both species often begin their vocalizations with introductory trills that also sound superficially similar to each other. With a little practice, however, and the use of recording tools that I have outlined in previous articles, it is actually pretty easy to tell them apart. As you will see, frequency (pitch to the lay reader) is the key to identifying barbets. The different species each call at specific frequencies, which are diagnostic in separating their vocalizations.

The Brown-headed Barbet (also known as Large Green Barbet) has a deeper, more sonorous-sounding ku-troo that is at a much lower frequency than its congener, representing the primary call of this species. This call is generally strongest between about 0.8 – 1 kHz frequencies. Prior to this call, birds may begin calling with a trill of about 10-20 notes per second, gradually settling into a repetitive kutroo….kutroo….kutroo. In addition, the notes are more clearly spaced out, and thus sound more distinct from each other than in the White-cheeked Barbet.

Spectrogram of the above call analysed by Anand Krishnan

The White-cheeked Barbet (also known as Small Green Barbet), on the other hand, emits a higher-pitched call (which is strongest between about 1.1 – 1.3 kHz), which is also preceded by an introductory trill at the same frequency. Although there is some overlap with the Brown-headed Barbet in frequency, the call generally sounds higher-pitched and is a more disyllabic, shrill-sounding ku-turr. In addition, it has a somewhat higher bandwidth (length of a note along with the frequency, or y-axis of a spectrogram). White-cheeked Barbet call notes generally span 250-350 Hz in the frequency spectrum, unlike the Brown-headed which is between 150-200 Hz in most recordings I have measured.

Spectrogram of the same call analysed by Anand Krishnan

Thus, in many birds with short, repetitive calls, an intuitive understanding of pitch is a great way to tell them apart. With a little practice, a trained ear can tell the calls of Brown-headed and White-cheeked Barbets apart without the need for actual measurement of frequency. Until then, a guide to these generally useful numbers is a reliable way to identify them from recordings (including those made on the phone). Data on the distributions of these species, using their calls as a guide to their presence, will help us understand where these species overlap, and whether they do, in fact, compete for food resources.

The Brown-headed Barbet is mostly found in deciduous forest habitats, but also extending to orchards, gardens, and city parks where suitable fruiting trees are present. The White-cheeked Barbet on the other hand occupies wetter habitats in general, including in the Western Ghats and associated hill ranges, but also extends into cities such as Bengaluru, where it is common and conspicuous. 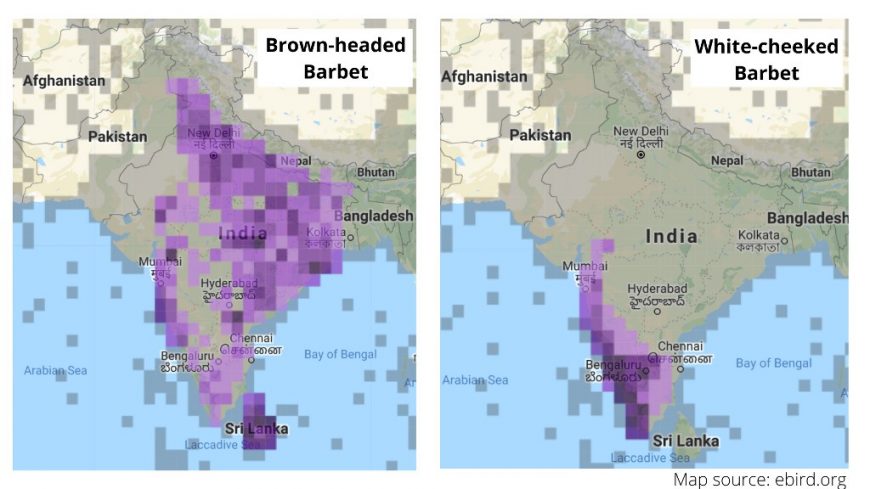 The Brown-headed Barbet (also known as the Large Green Barbet) is one of the largest barbet species (27 cm) in peninsular India and Sri Lanka. The head, nape, and mantel are brown covered with fine white streakings. The brown on the mantle fades to yellowish-green on the upper back. The lower back and tail are parrot-green. Green wings have faint buff patches on the wing coverts’ tips. Lack of supercilium and yellow to orange orbital skin (patch around the eye) are diagnostic features of this species. Bill is thick, orange to reddish-orange in colour and black bristles protruding from the bill’s base. The chin, throat, and breast are also brown with fine white streakings. 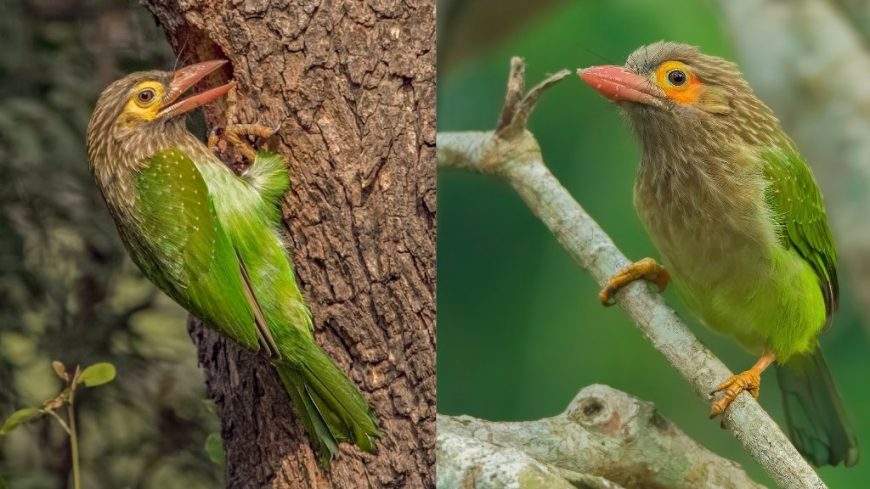 The White-cheeked Barbet (also known as the Small Green Barbet) is a medium-sized barbet (23 cm), smaller than the Brown-headed Barbet. The crown is brown and the brown nape is covered with fine white streakings. Short white supercilium and a prominent white-cheek stripe (contrasting with the black around the eye) are diagnostic characteristics of this species. Bill is pale-coloured or fleshy pink with long bristles jutting out from the base of the bill. The throat is white, and the breast beige with indistinct brown streakings. 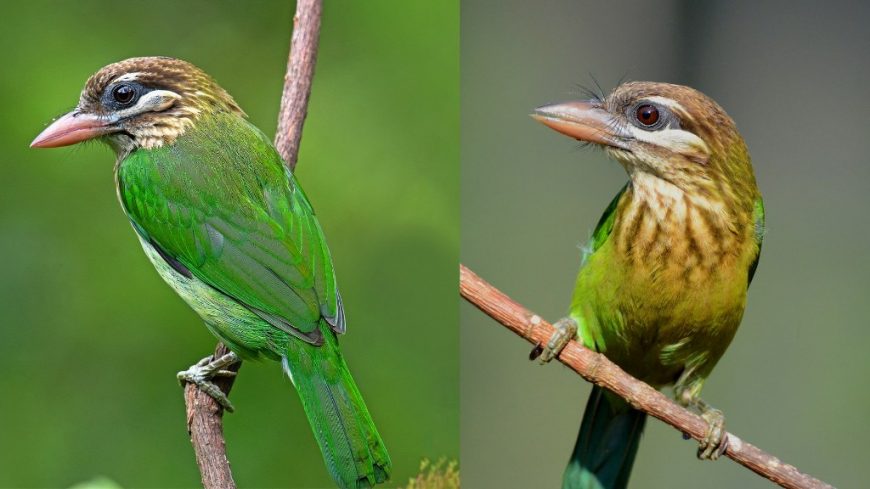 Please note that the main focus of this article is identification based on vocalisation. If you wish to know more about plumage identification, please visit Birds of the World which can be freely accessed by anyone in India.

Glad to know this difference. Since there is a bit of range overlap, will be good to also figure out if we’re hearing the white-cheeked or brown-headed.

These differences in frequency will be very helpful in recognising the type of barbet.

Very interesting article on vocallization of two barbet species. It could be interesting if he could record and analyse some inforormation on difference of male and female calls of a species.