By Anand Krishnan and Sarthak Malusare

Two Perdicula bush-quails—Jungle Bush-Quail (Perdicula asiatica) and Rock Bush-Quail (Perdicula argoondah), are widespread in Peninsular India in scrub-jungle and grassland habitats. Like many quails, they are most vocal when breeding. However, they are often shy around human beings and difficult to see, and the subtle plumage differences mean they can be difficult to tell apart. Both species occur together (or at least in adjacent areas) in many parts of their range, including Pune where the recordings in this article were made, and they can pose an identification challenge for birders within this district. 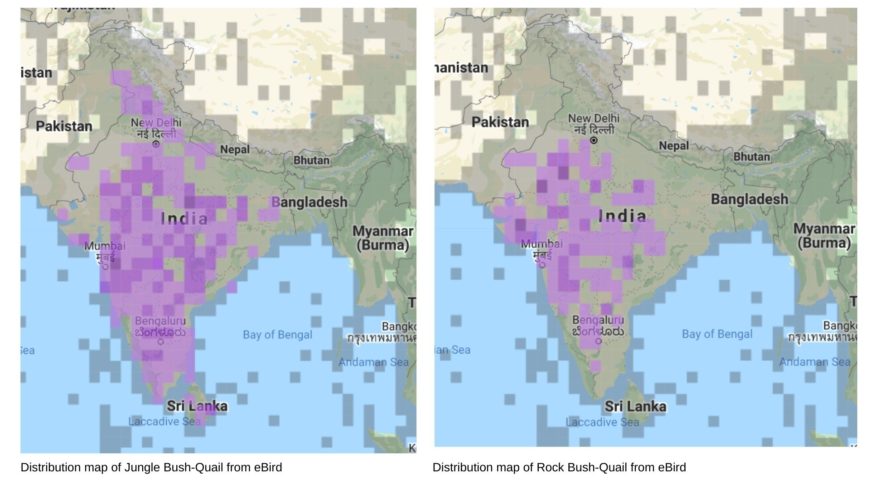 Salim Ali and Dillon Ripley, in the “Handbook of the Birds of India and Pakistan”, Volume 2, describe a whistling call and a grating “chee-chuck, chee-chuck” for the Jungle Bush-Quail. They do not distinguish the Rock Bush-Quail from the Jungle Bush-Quail vocally. However, important differences exist, as outlined in Rasmussen and Anderton’s “Birds of South Asia”. This writeup elaborates on these differences between the two species’ long, whistled ‘trill’ calls with examples, to provide a key for identification. Using this key will hopefully help provide some clarity on the distributions of the two species around Pune. Using recording apps such as SpectrumView you can record any bush-quails on your mobile phones and identify them from a spectrogram, which represents frequency (pitch) on the y axis and time on the x axis. Recordings on online databases (eg: Xeno-canto: https://www.xeno-canto.org/ and AVoCet: https://avocet.integrativebiology.natsci.msu.edu/, as well as the Macaulay library: https://www.macaulaylibrary.org/ ) can help you get more familiar with the sounds before venturing into the field.

Below is a description of various parameters using calls recorded within Pune, as a means of providing pointers about how to identify the calls of the two species.

We generally find the Jungle Bush-Quail to be commonest in the west and south of Pune, in wetter hilly areas such as Sinhagad and Pabe Ghat westwards, whereas the Rock bush-quail is commonest in the drier semiarid locations to the east such as Saswad. We have never heard the calls of both species together in Pune so far (although this does not rule out coexistence). In other parts of their range, there may be local overlap in some areas, but a lot remains to be learned about the relative distributions of both these quails.

The “trill” calls of each species, uttered mostly during the monsoon, are distinctive, although both span a broader range of frequencies toward the end, thus appearing to reach a crescendo.

Calls of Jungle Bush-Quail: The Jungle’s call is much faster (in the example below, starting at 18-19 notes per second, slightly slowing down to about 16 notes per second in the end), and over a narrower bandwidth (the difference between highest and lowest frequency), or range of frequencies (in the beginning, between 2.4-2.7 kHz, in the middle about 2.2-2.8 kHz, and by the end about 2.2-3.1 kHz), sounding like a tremulous, quavering whistle, which reaches a crescendo.

Calls of Jungle Bush-Quail: The Rock’s call is slower (about 6 notes per second early on in the example shown below, slowing down slightly to 5 notes per second in the end) and over a larger frequency range or wider bandwidth (2.1-3.6 kHz in the beginning, and about 2-3.8 kHz at the end) with each note well-separated and an apparently less-pronounced crescendo. The result sounds less like a single long whistle, and more like a deliberate series of whistles (roughly transcribed as wee–wee–wee as opposed to the faster wi-wi-wi-wi-wi of the Jungle Bush-Quail). Because some of the fine frequency structure may be lost if the bird is at greater distances, the vocal rates (number of notes per second) are the best guide to telling these birds apart.

Call and Spectrogram of “trill” calls of Rock Bush-Quail

As you can see, the spectrograms of both species show the difference in notes per second. The Rock Bush-Quail’s call is only a third as fast as the Jungle Bush-Quail’s. So keep your eyes and ears open, record calls of bush-quails as you see them on your mobile phone, and use these parameters to get an ID, especially if you don’t see the birds themselves.

In case you do observe either species in the field, and they are not vocalizing, the female plumages are immediately distinguishable: the female Rock has a plain face, whereas the female Jungle is patterned like the male. In the males, the Rock has a white brow running through and above the eye, with a rufous-brown stripe above it, which is not bordered with white. The male Rock does not possess a white moustachial stripe and lacks a distinct brown ear patch. The male Jungle, on the other hand, has a deep rufous brow running immediately above the eye, bordered with white. The male possesses a white moustachial stripe and a distinct brown ear patch. This simple key has proved rather reliable and helpful to me in the field, but I personally still recommend using vocalizations above anything else. Learning how to recognize the calls of the two species will inform you of their presence even if the birds themselves are unseen. More information from birders recording with mobile phones will help improve our knowledge of these calls, and therefore the distributions of these quails. 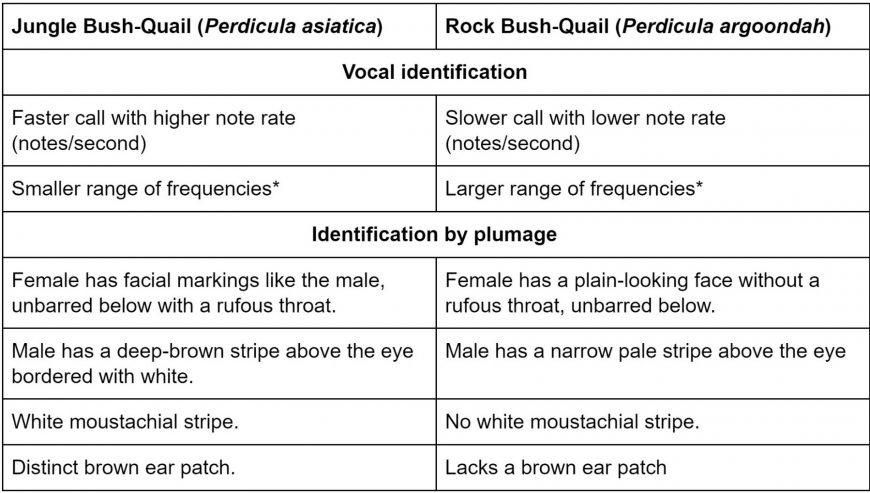 Table summarizing the major identification points highlighted in this article 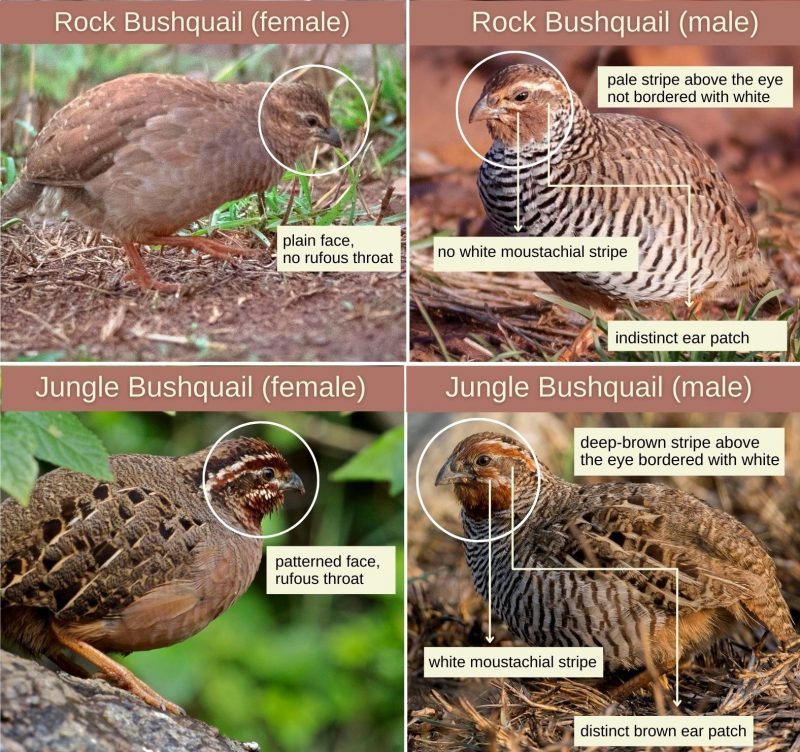