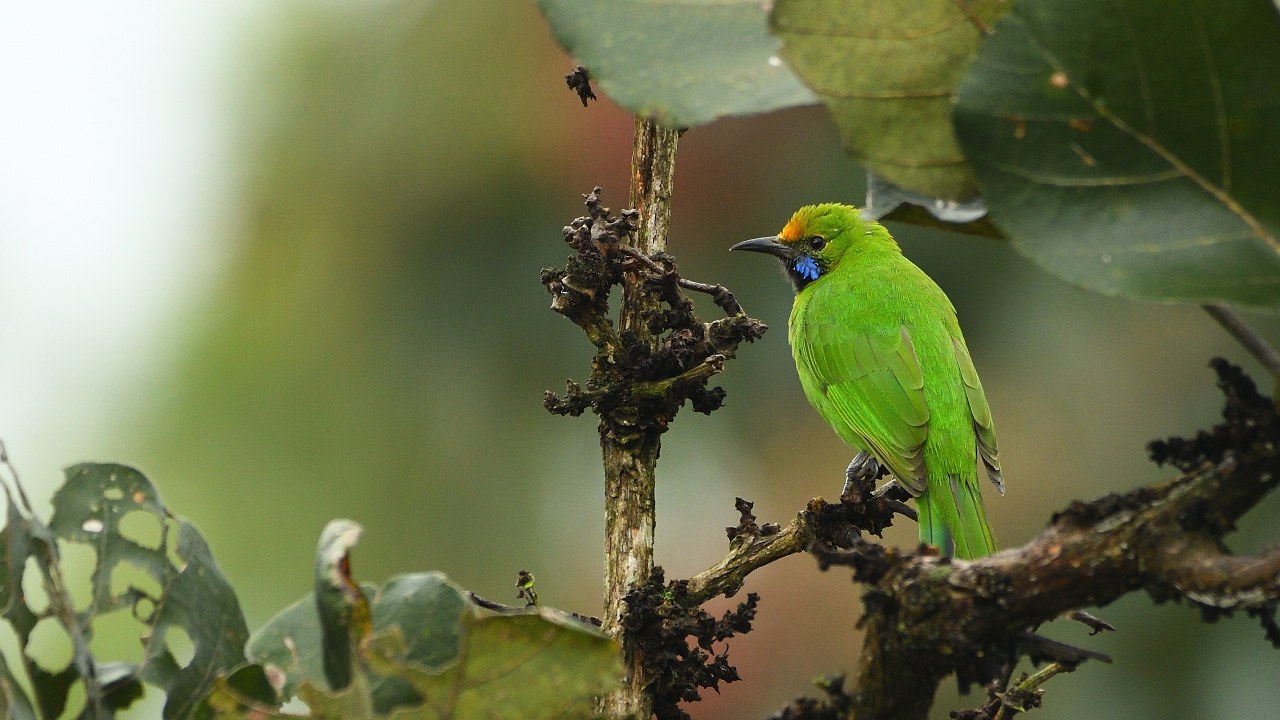 There are four species of leafbirds (also known as chloropsis) found in India and they never fail to enthral a birder. Each of them is largely green, slender in build, with a medium-length tail and the habit of dwelling in the top or mid-canopy. They feed on fruits, insects and even nectar.

A pair of Golden-fronted Leafbirds:

All the species are usually seen in pairs or in loose flocks. In the non-breeding seasons, they are often seen in mixed flocks and hunting parties.

This article looks at the two frequently confused leafbirds – Golden-fronted and Jerdon’s – that are recorded most often, and explains they key features to identify one from the other. 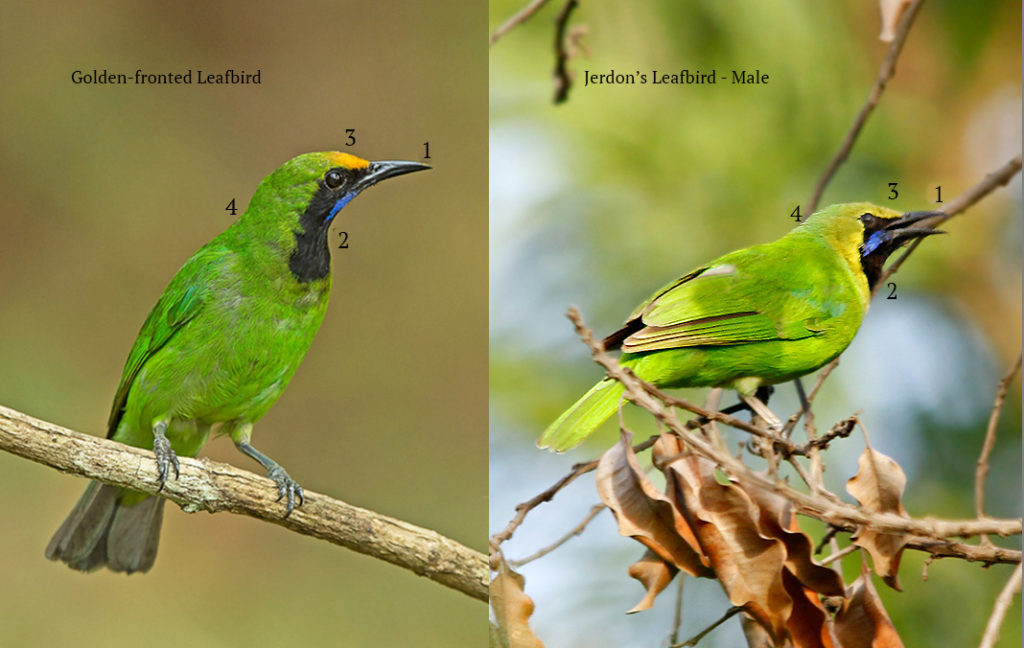 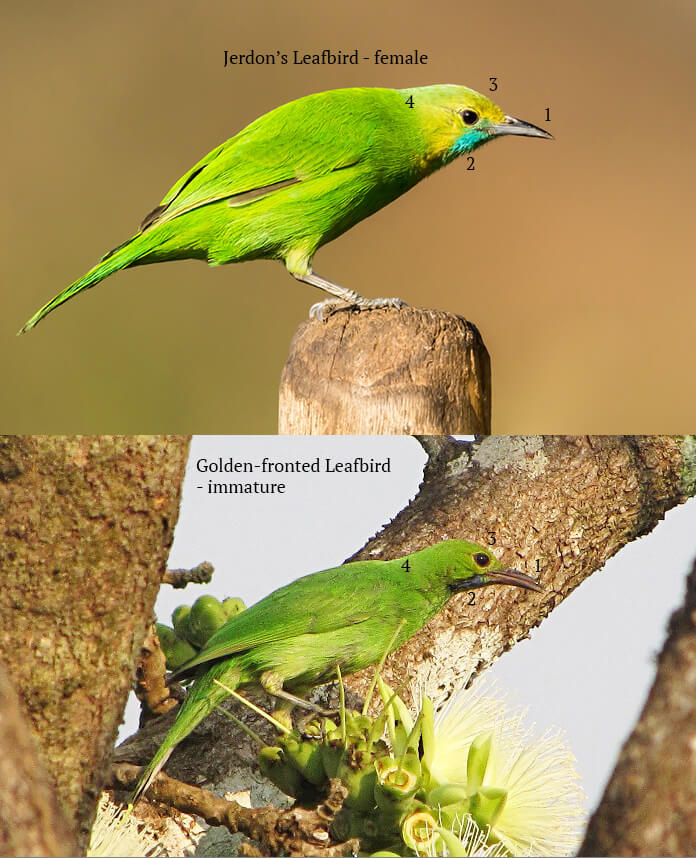 All leafbirds may sounds extremely similar to the untrained ear. Most calls are a mixture of harsh and sweet notes with some differences in quality. Leafbirds are also excellent mimics and often have an impressive repertoire of sounds that may cause confusion amongst several birders!

Have a listen to the song of the Golden-fronted Leafbird and the Jerdon’s Leafbird to understand how similar they can be!

Do check out other calls of the Golden-fronted Leafbird, Jerdon’s Leafbird, Blue-winged Leafbird and the Orange-bellied Leafbird.

a. Habitat may often be a pointer to what leafbird you are seeing. If you are in a rainforest, you are most likely to see a Golden-fronted Leafbird, while a dry scrubland with scattered trees will most probably have only Jerdon’s Leafbirds. However, many regions – such as the western coast, central Indian forests and parts of the eastern ghats may have both species co-existing (in variable numbers).

b. Leafbird juveniles are tricky and often require a good look, with multiple features noted, before an ID can be finalised.

c. Seeing a pair often aids in identification as Golden-fronted Leafbirds do not exhibit the obvious sexual dimorphism that the Jerdon’s Leafbirds show.

d. In case of any doubts, eBird provides the option of using Jerdon’s/Golden-fronted Leafbird and Leafbird sp.

The Blue-winged Leafbird is similar to Jerdon’s Leafbird but allopatric (i.e. populations of the two are geographically isolated from each other). It has blue on the primaries (outermost group of flight feathers) and the tail, while the face mask is even smaller. The male has a bright yellow border to the face patch. 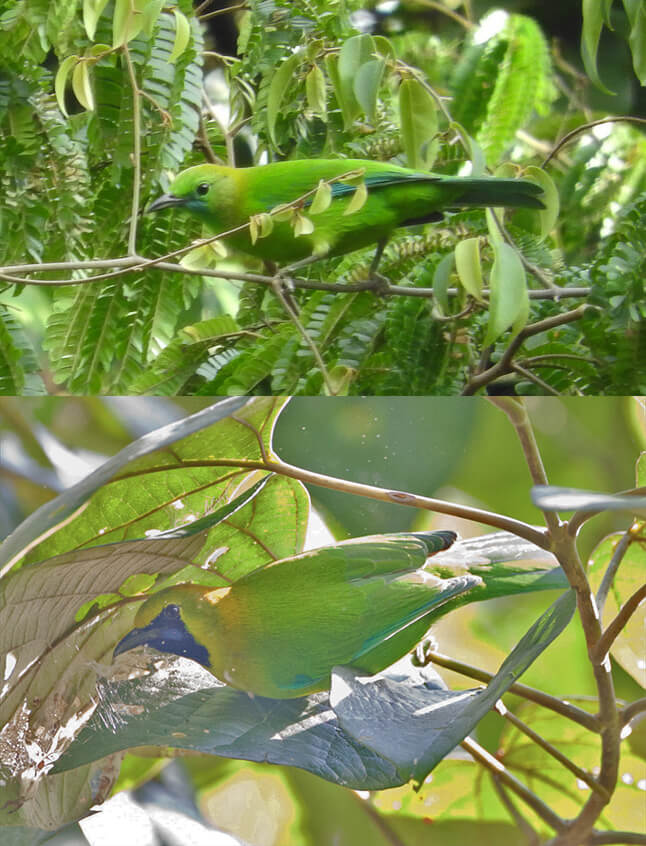 The most distinctive of our leafbirds thanks to the obvious orange underparts. The face mask on the male is large and elaborate while the female only shows a blue moustache. The bill is longer than that of the Blue-winged Leafbird. The male also has dark blue wings and tail. 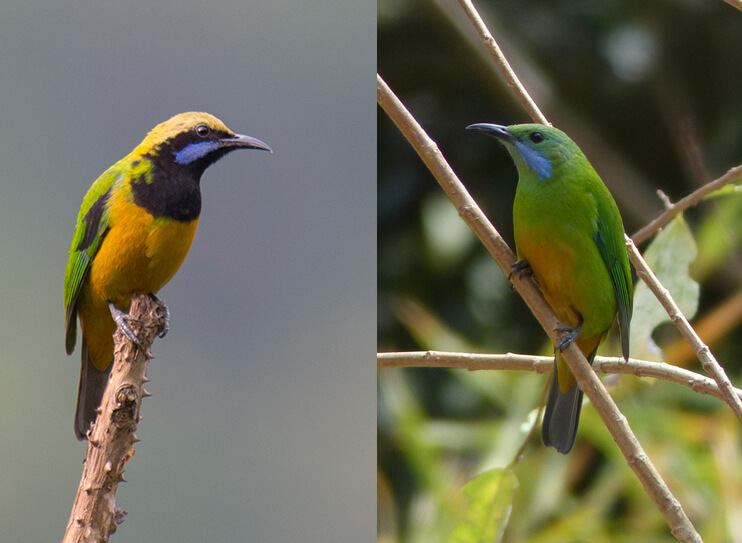 Sir,
Please let me know any such activities in Hyderabad

A very handy guide. The Jerdon’s and Golden-fronted are frequently confused but this guide really calls out the subtler differences. Habitat clues are well spelt out too. Thank you.

Nice and detailed information. Always get confused between the jerdon’s and golden fronted.

Very Useful and handy easy to differenciate between among sp. Very good job.Thanks.

Very informative and detailed study. Thank you very much.