Endemic Bird Day is an annual event in India in May, coinciding with the Global Big Day, a worldwide effort to document as many species as possible in a single 24-hour period. In India the heat of May, with many winter migrants having already departed for the breeding grounds further north, is not the best (or easiest) time to be attempting a “big day”, but it can be a good time to concentrate on resident, and endemic, birds. 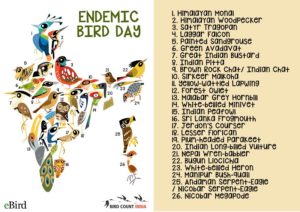 Endemic birds are those whose distribution is restricted to a defined area. For Endemic Bird Day we consider the region of South Asia (Afghanistan, Bangladesh, Bhutan, India, Maldives, Nepal, Pakistan, Sri Lanka). There are probably more species endemic (or near-endemic) to South Asia than you think!

Endemic species are truly our very own; let’s get together and document them, from common and widespread endemics like Grey Francolin to rare and isolated species like Wayanad Laughingthrush. The lists gathered during Endemic Bird Day each year will give an annual snapshot of the distribution and breeding of these endemic species, and will in the long-term provide a valuable overall resource. In addition, any endemic birds we record contribute to the overall Global Big Day, where we will joining tens of thousands of birders worldwide in documenting all our sightings.

How to Take Part

[…] are inching closer to the big date with Endemic Bird Day 2016 on 14 May 2016. Do not forget to go birding on the day and look for residents and endemics around […]

[…] the heat of May, 176 intrepid eBirders went out to look for endemic (and other) species on Endemic Bird Day, in the process uploading 620 birdlists containing over 11,000 bird observations. In all, 567 […]

[…] (Saturday 14 May) is Endemic Bird Day. You’ve seen the list of all of our endemics, heard some interesting facts about some, […]

May 2016 eBirders of the Month | Bird Count India

[…] saw more birding activity than is usual in this hot time of the year. The Endemic Bird Day and associated events contributed to this, but birders have also been active during other parts of […]