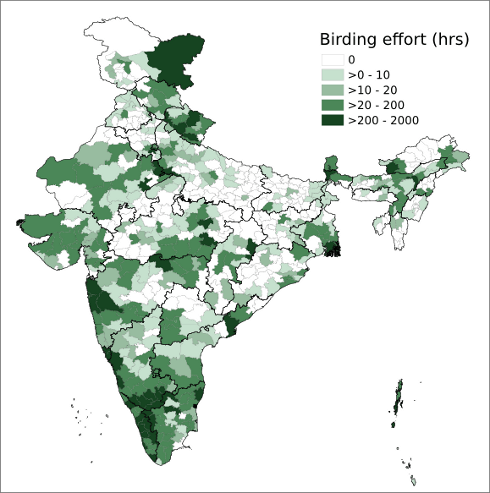 Birders like me use eBird to maintain our sightings in a single place, to keep track of what we have seen where, and to prepare for our next birding outing by looking at the barcharts and range maps to look up what we can expect to see.

The larger purpose of eBird, of course, is to document the distribution and abundance of birds, and to investigate how this changes over the seasons and over the years. Doing so requires a large amount of information from all parts of the country. It relies on individual birders and birding groups going out birding frequently and uploading their bird lists. On the surface, we seem to be doing well in India. After all, over half a million bird records from India are now available on eBird, and the numbers are growing rapidly. Overall, 35,522 hours of birding effort in India are documented on eBird as of 9 September 2014.

These numbers sound impressive, but do they mean that we now have a good idea of distribution and abundance of Indian birds? Unfortunately, not, because all this birding effort is not spread uniformly across the country – some areas have relatively large amounts of information, and others virtually none.

To provide a quick look at how birding effort on eBird is distributed across the country, we have calculated, for each district, the total number of hours of birding represented on eBird (as of 9 Sept 2014), and have colour-coded this on the map below.

A quick glance at this map shows large gaps in information. UP and Bihar comprise a major gap which continues through Jharkhand, Orissa, Telangana and parts of Maharashtra. Parts of Madhya Pradesh, Haryana, Punjab and Kashmir are just as empty. North-east India may be highly biodiverse, but except for a few sanctuaries most of the other districts do not have any information in eBird. Even states such as Gujarat and Rajasthan, with a fair number of resident and visiting birders, have districts with no effort-based lists: twelve in Rajasthan and five in Gujarat.

Before eBird data can be used at the scale of the country, these gaps have to be filled as best as possible — which is where all of us birders come in! If you know a birder in these districts please introduce eBird to them. They will be the pioneers for their districts in contributing bird information to the largest online database of Indian bird records!

If you are yourself travelling to some of these places for work or holiday, please don’t forget to upload your bird lists from the front yard of your hotel or from a dhaba stop. If you can visit a local park or a sanctuary that would be even better!

Attached is an excel file listing the birding effort represented in eBird for all districts of the country. Take a look and identify the gaps that you can fill. If you are planning a Big Bird Day event or a Bird Race, see if it is possible to organize it in one of these unrepresented districts. Birding in less-documented areas can be fun because you don’t know what surprises may be in store!

Another way to help fill these gaps is to dig through your birding notebooks to see if you have old bird lists from these areas. If you do, it would be great to upload them and help fill in the blanks!

Appendix: Top 10 districts in terms of birding hours represented on eBird
Congratulations to the top 10 districts! If you are a birder from here, don’t slow down. Do keep birding where you are, but also consider making a trip to a neighbouring district to help fill in the gaps.

And here is a complete list for all districts of the country.

10 thoughts on “Where are the birding gaps?”