This is the third in a new series focussing on Patch Birding. In this series we highlight birders who have been faithfully visiting their patch, through this, learning the details of the birdlife and its seasonality there.

1. Please tell us about yourself: where do you live and what do you do. 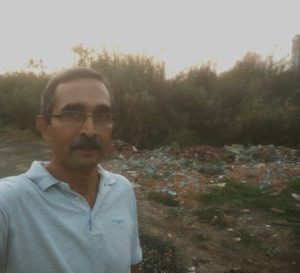 I am a Business Consultant / Trainer residing at Cochin. I have worked with some of the leading business houses in India before launching my own consultancy in the Learning and Development domain.

Birding has been a hobby and passion since the mid-1980s. My friends and I used to trek in the forests of Kerala. We even used to camp there after receiving permission from the Forest Department. Those days our group regularly participated in programs and camps conducted by WWF. Initially, the focus was on adventure and observation of wildlife.

Birding became a hobby thanks to a friend who was a member of BNHS. He had attended a bird banding camp at Point Calimere and told us about the amazing number of species of birds that were out there for us to observe. From then on, we took interest in observing birds during the treks and the ones identified were recorded in notebooks. Identification was extremely difficult because we didn’t have any books on birds and the internet didn’t exist. We hardly knew any other birders. The office of WWF had a few books of Dr.Salim Ali for reference and for sale – slowly our collection of books on birds started growing – Field Guides with better quality illustrations came much later.

We were well and truly hooked when the Asian Wetland Bureau started its mid-winter bird survey in 1987 – news about the census came to us through BNHS newsletters and we decided to survey wetlands in our neighbourhood (Trivandrum) and beyond (South Tamil Nadu). Our team used to send detailed hand-written reports for 6 to 7 different wetlands to Mumbai and later to the local coordinator (Dr. P O Nameer). It wasn’t a bother because we were doing our bit for the conservation of birds and their habitat.

2. Please tell us about your patch: where is it located, what habitats does it contain, how often do you visit and whether you follow any sort of procedure or protocol when visiting for birding.

Located in Cochin City my patch is a part of the route I take on most days for the constitutional walk, my regular health routine. The patch (10.016319N, 76.281007E) is named Vaduthala – JM Spot, but not because JM is my initials – an apartment named JM Towers stands next to the patch. It is a happy coincidence. 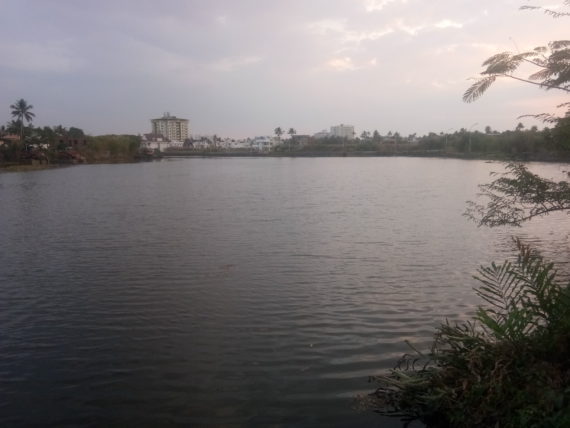 The patch consists of privately owned land (10 acres) located around 4km away from the sea, with a lot of wetlands in and around it. On the eastern side runs the Perandur Canal, which flows into an arm of the Periyar River, along the Northern side the bund made for the railway line separates my patch from a large brackish water lake formed by the Canal.

There is also a permanently swampy area between the rail and the road on the Northern side.

On the Southern side there is a school and JM Towers and, on the Western side the patch is bordered by houses. There were just 2-3 houses inside the patch when I first discovered it in 2015 but over the years the owners of the plots started building more. Today there are over a dozen completed and semi-completed bungalows already in the once undisturbed area. Human interference and vehicular traffic have been on the rise since 2015 and it is only going to increase in the days ahead.

There were very few tall trees in the patch other than a dozen coconut trees, but there is a compact wooded patch on the Northern end, near the railway line, next to the swampy area. Last year some Rotary Club members have planted trees along the roads that were constructed for access to the houses.

In 2018 and 2019, Cochin experienced unusually high levels of rainfall and that led to the flooding of the entire patch – the place was inundated for 2-3 days in both years.

From January 2015 I started recording my observations on eBird, but not so regularly – only from September 2015 it became a routine activity.  Whenever I am outdoors, I observe birds, even if it is for work, and in the past lists were made on paper. But, when eBird became available as a resource recording and managing observations became easy. At first, the reports were made via the desktop application, but later the mobile application made the task even more convenient – now we can record our bird observations live from the field.

My consultancy work takes me away from Cochin often and when it gets really hectic I am unable to visit the patch. But whenever I am in Cochin the birds at “JM Spot” get recorded without fail.

My unbroken streak on eBird is close to 1300 days and I have submitted more than 550 checklists from my patch. My first checklist from the patch was made in November 2015. Most of the observations have been made in the evening because I am a late riser and hence unable to complete the walk in the morning hours. But there are a few reports made in the morning and during the mid-day hours too. 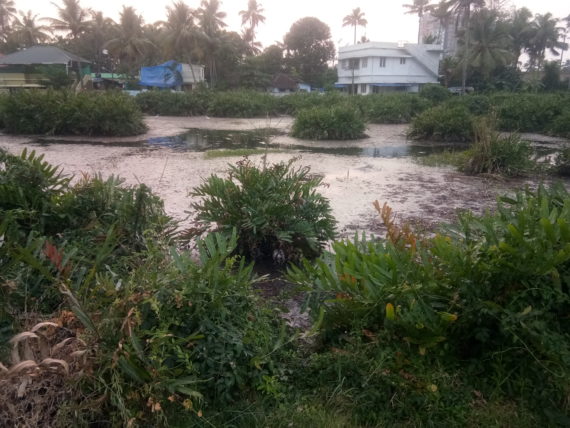 Swampy area at the Northern end of Vaduthala

I spend 15 to 20 minutes in the patch and walk its entire length – the major road runs along the canal from one end of the patch to the other and there is a second road perpendicular to the first one at the centre. On every visit, I check the swampy patch for waders and ducks and the grass reed patch is surveyed for passerines.

I visit the patch at least 3 / 4 times each week, mostly after 5:30 in the evening – around 1 or 2 trips each month in the morning. I know that I should be making more trips in the morning because the number of species recorded is usually higher.

So far, I have recorded 101 birds in the patch – on a regular visit I observe 20 to 30 species – let me say one more time that the number is usually higher on the morning visits and also in the winter months

Oriental Darter, Little Cormorant, Black-headed Ibis, and Openbills can regularly be seen flying over the patch – they rarely stop in the patch to forage.

Black-crowned Night-Heron is resident to this region and can be seen in most months, but not regularly.

Malabar Starlings are seen during the summer and monsoon seasons. An interesting phenomenon noted is that while the Bulbuls and Bee-eaters come to roost in or around the patch, the Starlings use the patch as a staging point – they assemble in large numbers on 1 or 2 trees before flying off to the South to their roost. 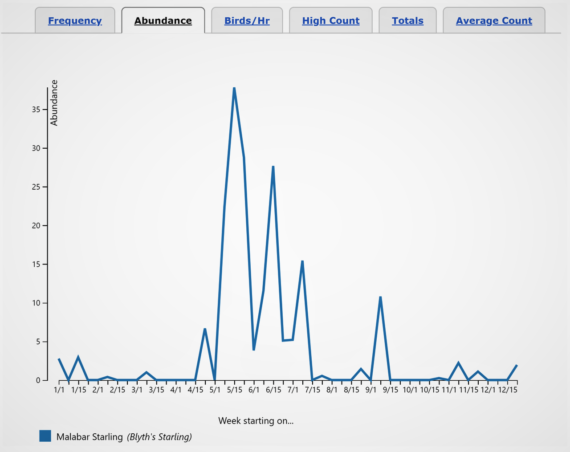 Barn Swallows are seen only after the monsoons and they leave by spring. The Bee-eaters too leave before the heat of summer sets in. Black-hooded and Golden Orioles are a couple of species which are seen less frequently – their calls are heard first and only after a careful search the bird can be spotted, in spite of their gaudy plumage.

Cattle Egrets disappear for a while during their breeding season, just after the monsoon, and Common Sandpipers are seen only in the winter months

The species that have disappeared completely, are the weavers. Both Streaked and Baya Weaver were last seen in 2016 and 2017 and none have been recorded since then.

Common Myna, Rose-ringed Parakeet, and White-cheeked Barbet are the three species I have observed nesting in the hollows on Coconut Trees.

I have noted that the number of Bee-eaters (Blue-tailed and Green) seen are higher in the evening because the patch is their roosting area – initially, they used to roost among the grass reeds within the patch, but after the area became more disturbed they moved to another patch beyond the railway line. At sunset they can be seen gathering in large numbers before settling down for the night.

Construction of homes in the area is causing destruction of the habitat and disturbance for the birdlife. Nothing can be done about it because the land is privately owned. There is a proposal to build a bridge over the Perandur Canal to connect the patch to a busy neighbourhood on the other side. That will probably speed up the construction of houses and chase away the remaining birds that are now present in the area.

As mentioned earlier I have observed breeding of Lesser Whistling Duck, White-breasted Waterhen, Common Myna, White-cheeked Barbet, Rose-ringed Parakeet and House Crows in the patch – but I still haven’t been able to observe breeding and nesting of Black Drongos although there are 8-9 of them regularly present.

Even after 4 years of regular visits, there is something exciting to be expected when I visit the patch.

A few days back I was passing the area in the afternoon on my way to work and suddenly a group of Whiskered Terns noisily arrived over the Perandur Canal – they made sweeping passes over the water to catch food before going back towards the larger waterbody in the North. It was so exciting to see them in action – the sortie lasted just a few minutes.

For the last two months, the canal is being dredged to remove the silt and dirt – all the waste has been dumped in the patch. But the dredging also cleaned the waterbody and obviously brought more fishes into the area. The number of Brahminy Kite observed in the area has increased. One evening there were 43 Brahminy Kites flying over the canal and sweeping down to catch fish.

I wonder how many interesting incidents such as the ones above are going unrecorded and unreported – only with systematic and regular observation, we can get greater insights on birdlife. Visits need to be planned at various times of the day to get a deeper understanding of bird behaviour. I haven’t spent any time there at night – probably there are some owl and nightjar species visiting the patch too.

My fear is that with the construction of more houses and the bridge the prospects for my patch aren’t bright, but while it exists, I will continue to record and report bird life from there. Hoping that the Government’s new policy for the protection of birdlife will help us protect such fragile and precious habitats.

Note: see the Kochi– Vaduthala (JM Spot) hotspot page in eBird to explore the birds of this location.