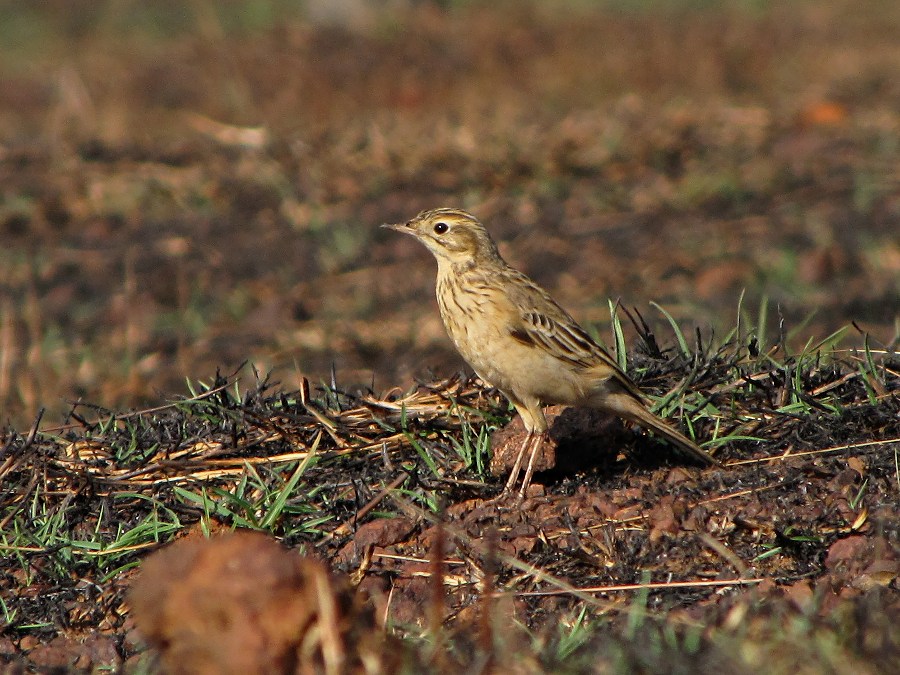 For Part 1 of the series (Identifying Paddyfield Pipits), click here.

Birders often divide the pipits into two groups – “large pipits” and “small pipits”. Roughly, it can be said that the “large pipits” are the ones which do not have streaked bellies, are generally large-bodied, long-legged, and have calls and songs that comprise of short, simple and harsh notes. Within India, the group of “large pipits” consists of Paddyfield Pipit, Blyth’s Pipit, Richard’s Pipit, Tawny Pipit, and the Long-billed Pipit.

In the previous article on identifying pipits, we focussed on the most ubiquitous species across the subcontinent – the Paddyfield Pipit. Outside the Himalayas, the high Western Ghats, and some select habitats in southern peninsular India, it is the only resident species of pipit one will encounter throughout its range in the country.

However, as winter approaches, it is joined by congeners that look very similar and these pipits are often mistaken for each other. In this article, we will look at those species which have well-streaked mantles and backs. These include Paddyfield Pipit (discussed earlier), Blyth’s Pipit, and Richard’s Pipit.

The Blyth’s Pipit prefers open grassy patches both near and away from water – habitats very similar to where Paddyfield Pipits are likely to occur. They often call just when flushed, before taking to a very wavy undulating flight.

The Blyth’s Pipit is a well-proportioned bird which in shape appears most like a Paddyfield Pipit. It has a slender build, seems slightly longer-tailed than the Paddyfield Pipit and often gives the impression of having thick undertail coverts.

Its head is relatively small and the fine bill is usually dark (though some individuals may show two distinct tones on the bill) and does not have a curve which is as prominent as that in the Paddyfield Pipit. 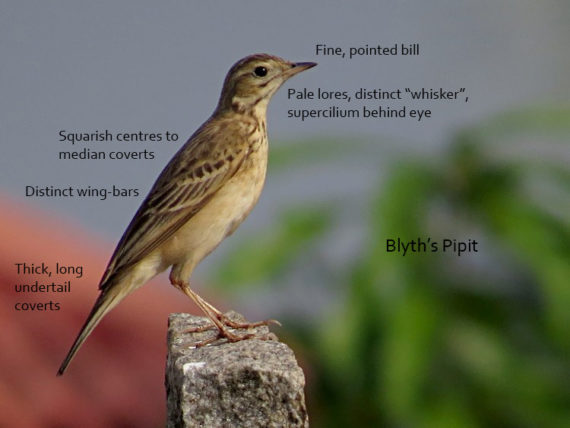 In the field, the Blyth’s Pipit can often come across as a rather pale pipit. But a closer look reveals the strong contrasts of the pale brown plumage with the dark streaks all over the upperparts. 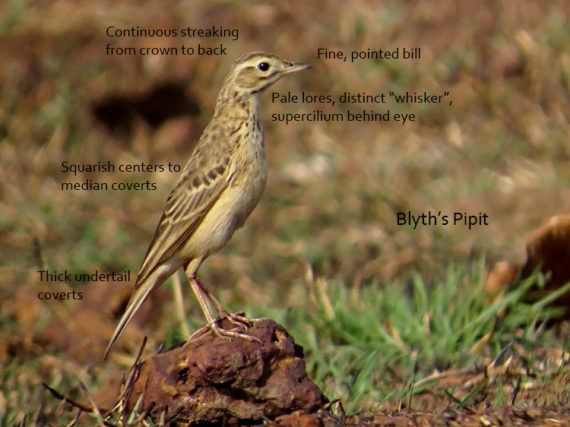 The face of the Blyth’s Pipit is a useful feature to note. The Blyth’s Pipit has the palest lores of all the pipits in this group. This gives it a distinct look of having a supercilium that starts behind the eye. The pale lores also give this species extremely pronounced “whiskers” – a short stripe that runs below the eye from the base of the bill. Overall, the face is not as marked as the Paddyfield’s and the cheeks are not as dark and thus, it looks more “open” than the faces of any other similar pipits. 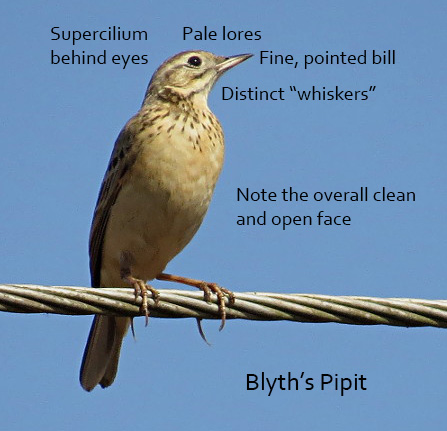 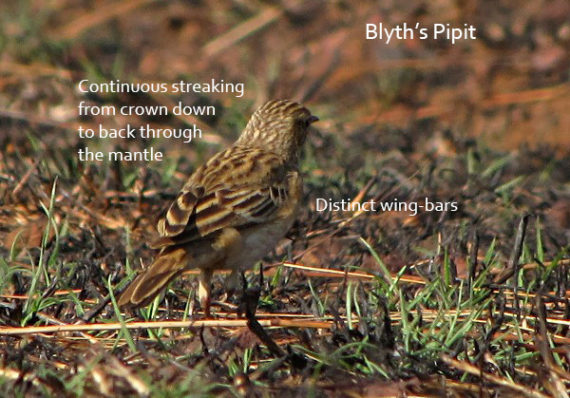 Note how the streaks contrast strongly with the pale plumage. Photo: Ramit Singal

The median coverts of juvenile Blyth’s and Richard’s Pipits are often identical, as shown in this illustration from this guide to identifying Blyth’s Pipits. Note the centres to the coverts for the Richard’s are still “pointier” than those of the Blyth’s – a feature quite difficult to tell apart in the field.

Such median coverts are unique to this species in this group of pipits (Massive caveat: be wary of juvenile Paddyfield, Richard’s and Tawny Pipits as all of these have pale edges similar to those on Blyth’s Pipits), though it is a feature that it shares with “smaller” pipits (most commonly Tree and Olive-backed Pipits).

The call of the Blyth’s Pipit is rather distinctive – an explosive “shpeuu” (often just as they are flushed) that doesn’t have the harsh quality of similar calls by Richard’s and Paddyfield Pipits. If you are familiar with the call, it is perhaps the most diagnostic feature of this species.

This species also gives short “chup-chup-chup” notes in flight (usually before landing or once they are well and truly in the air) similar to those of the Paddyfield Pipit but these notes are almost always accompanied by the longer more typical calls.

The Richard’s Pipit is quite partial to tall grass in wet fields or in patches close to water. Though their stance is often said to be upright, it is usually only true when they are in an alert, still position and easier to tell when one is already familiar with other pipit species.

They move through the grass in a crouched, stalking manner and can be very difficult to observe in these cases. When flushed, they take to a strongly undulating flight when they appear visibly heavy as they dip low and back up again.

Like other pipits, these often perch up at a height when flushed.

The Richard’s Pipit is a large pipit with a visibly bulkier body (sometimes showing a distinct “pot-belly”), longer legs and a longer, broader tail than other similar pipits. The tail often (not always) appears rather “loose” and “floppy”, quite unlike that of the Blyth’s and Paddyfield’s pipits, and the bird thus seems like it has very short undertail coverts. 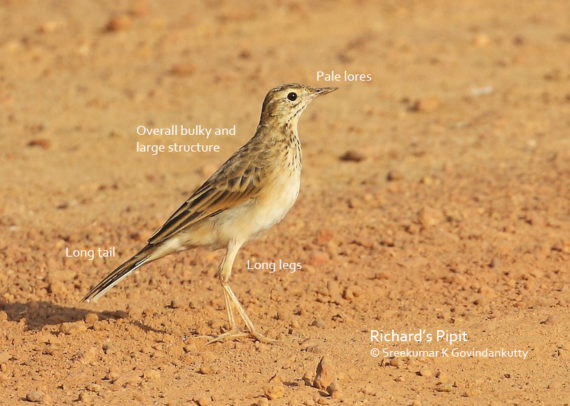 Note the pale lores, overall much larger structure of the bird and the small-headed look as a result of a large body, long tail, etc. Photo: Sreekumar K Govindankutty/ML Library at the Cornell Lab

In proportion to the body, the Richard’s Pipit sometimes looks like it has a small head with a heavy bill. The bill recalls that of a Paddyfield Pipit, usually showing a pronounced curved tip to the upper mandible. However, the bill is thicker and incredibly variable – some bills are strongly dual-toned while others seem to be dark throughout. 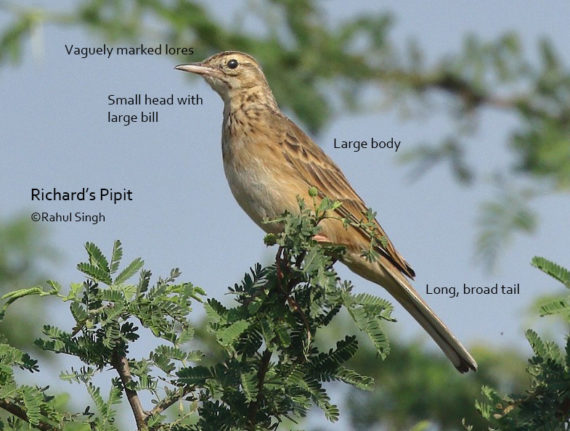 Note again how distinctly large this bird is – the tail and the body, both make the head look rather small. Photo: Rahul Singh/ML Library at the Cornell Lab

Notes: The length of the bill, too, varies significantly and unless extremely long – should not be factored in as an important feature. Similarly, the hind-claw length is an oft-mentioned feature but is useful to take into account only if the claws are extremely long, as otherwise the median lengths overlap with the extremes observed in other species.

Until recently, Richard’s and Paddyfield Pipits were lumped together and considered to be the same species. Especially in the case of the subspecies that winter in SE Asia and perhaps in NE India, the structure and size of the birds may be very similar to Paddyfield Pipits.

The Richard’s Pipit is darker brown overall than the Blyth’s Pipit and usually as dark as the Paddyfield Pipit. In the field, the overall dark and warm brown plumage tones balance out the heavy streaking and hence, the bird doesn’t appear quite as “contrasty” as the Blyth’s Pipit does. 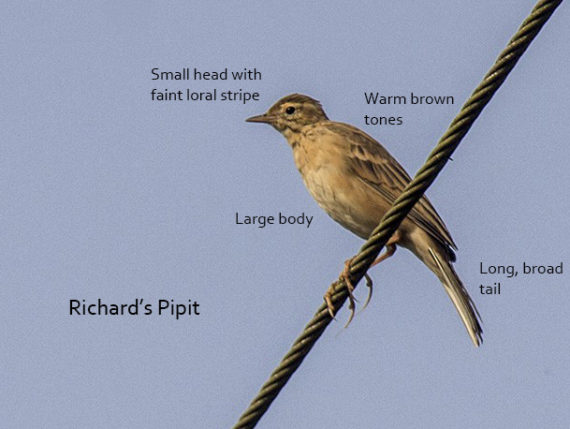 Note the overall warm brown tones on the bird which are reminiscent of a Paddyfield Pipit. Photo: Ramit Singal

Although the Richard’s Pipits has pale lores, they are rather variable with many birds showing fine/thin eye stripes that often make the face look very similar to that of the Paddyfield Pipit. However, the cheeks are not as well defined nor as dark as those of the Paddyfield and the face still feels somewhat more plain and open (though not quite as much as that of the Blyth’s Pipit!). 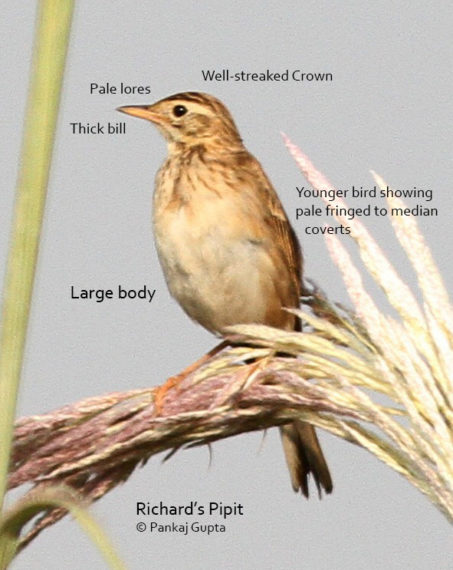 Note the relatively clean face and lack of contrast on the cheek. Photo: Pankaj Gupta/ML Library at the Cornell Lab

Much like the Blyth’s Pipit, the Richard’s Pipit is rather heavily streaked. The crown has strong dark streaks that run down in a thinner, more ill-defined form on the mantle and become much more obvious and thicker on the back. Be careful as the streaking is often not very distinct in the filed but is best seen as the bird changes position. 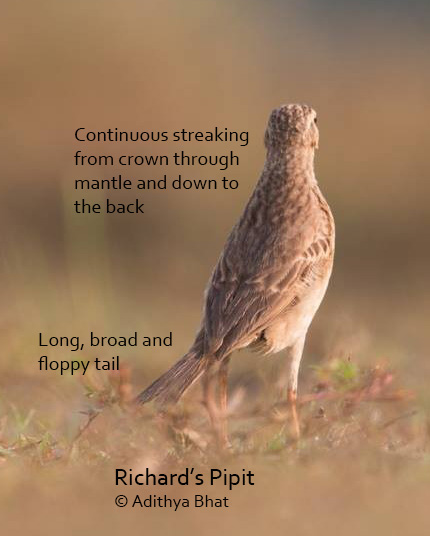 An adult Richard’s Pipit showing its well streaked upperparts as it stands in a typical erect posture. Note the tail looking rather floppy. Photo: Adithya Bhat/ML Library at the Cornell Lab

The dark patches in the centres of Richard Pipit’s median coverts are very pointy and arrow-like. The edges to these feathers in adult birds are of a light brown colour but can be extremely pale (similar to Blyth’s Pipits) in juvenile birds – a plumage usually seen in India only in September-October.

Note that the median coverts’ patterns are too often very similar to those of the Paddyfield Pipit and hence, should only be taken into consideration if they represent an extreme.

The calls of the Richard’s Pipit consists of loud, slightly buzzy “shreep” notes usually delivered in flight. This call is reminiscent to that of the Citrine Wagtail. They also deliver shorter, more relaxed notes especially when in flocks but these calls too can be differentiated by the trained ear. 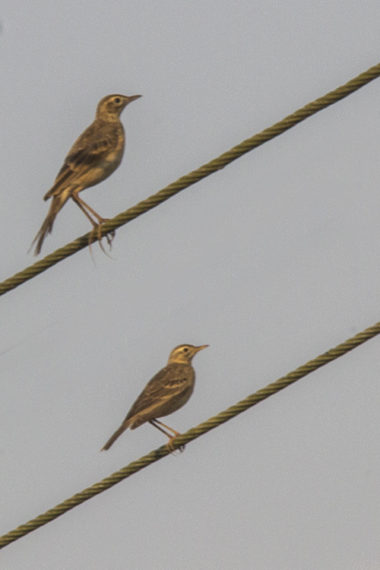 Richard’s Pipit on top and Paddyfield Pipit below. Note the posture, size difference and the proportions of the tail, head and body. Also note the hind claw lengths. Photo: Ramit Singal 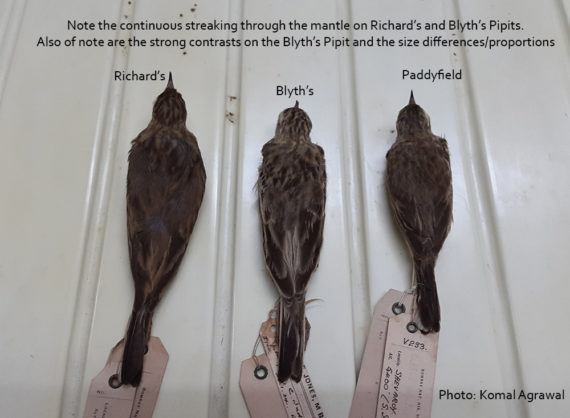 The specimens preserved at BNHS, Mumbai are very useful to illustrate the size differences between the 3 species. Also note how the Blyth’s Pipit is much paler and more contrasty than the other two. Photo: Komal Agrawal

Here’s a useful article that explains how to distinguish between Richard’s, Blyth’s and Paddyfield Pipit.

A guide to identifying Blyth’s Pipits on British Birds

The Tawny Pipit and the Long-billed Pipit (both to be covered in the following article) are both paler and less streaked in their adult plumages but the younger birds may be rather heavily streaked. However, both these species have distinctly marked lores, and a generally different shape and structure than either Blyth’s or Richard’s Pipit.

Identifying Pipits is not an easy task and even the most experienced observers tread with caution when a combination of features have not been observed. The calls are often the most reliable form of identification and there is barely any feature that is diagnostic by itself. So it is advised that observers take utmost care when labelling a pipit to a species level.

If you use eBird, it is advised that one uses one of the available slashes (such as Richard’s/Paddyfield Pipit or Richard’s/Blyth’s Pipit) or a spuh (such as pipit sp.).

For differentiating between larks and pipits, please see this article.

For Part 1 of the series (on Identifying Paddyfield Pipits), click here. 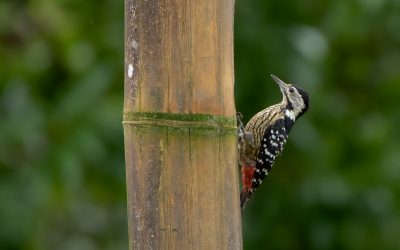