By Tarun Menon and Ashwin Viswanathan

Red-breasted, Taiga and Kashmir Flycatcher are three very similar looking flycatchers belonging to the Ficedula genus. Initially, all three were considered to be sub-species of Red-breasted Flycatcher and molecular data indicates that they form a sister group, i.e. they share a common recent ancestor. These three species can be distinguished from other superficially similar flycatchers like Asian Brown and Brown-breasted Flycatcher by the white sides to their blackish tail and their tendency to frequently ‘cock’ it. But as you may have seen, trying to differentiate between these three species can be difficult! While adult males are fairly easy to identify, females and first winter birds are notoriously difficult to tell apart.

Taiga Flycatcher displaying the typical tail flicking behaviour that is common to all three species in this group.

Red-breasted Flycatcher breeds in eastern Europe and west Asia, Taiga Flycatcher breeds in central and east Asia while Kashmir Flycatcher has a very restricted breeding range in the western Himalayas of Kashmir and NE Pakistan. Despite their varied breeding ranges, all three species can be found in peninsular India during the winter season from October to March, often in the same locality! Observe the migration maps below that clearly illustrate the differences in the breeding and wintering ranges of these three species. Taiga and Red-breasted Flycatchers share very similar habitats throughout the peninsula during winter, but Taiga is much more common in eastern and north-eastern India (where Red-breasted rarely occurs). Red-breasted Flycatcher is more common in the west (where Taiga also fairly commonly occurs). Kashmir Flycatcher may be seen in passage in north and central India, but it winters primarily in the high altitudes of the Nilgiris (where all three species may occur) and Sri Lanka. So, if you see one of these flycatchers east of West Bengal, you can be fairly confident that it is a Taiga Flycatcher, and if you see one during the breeding months in Kashmir, you can be fairly confident that it is a Kashmir Flycatcher!

Adult breeding males are relatively easy to differentiate by the amount of red on the throat and breast. Taiga Flycatcher (also called Red-throated Flycatcher) has a slightly deeper red restricted to the throat, often (but not always) separated from its cream-coloured belly by a grey breast band. Red-breasted Flycatcher, unlike Taiga, has red that extends onto the upper breast, meeting the white of the belly.

If you see any bird that lacks red (this can be a female, a sub-adult male or a non-breeding Taiga male: a bird in this plumage is called a “female type”), one of the keys to identification lies in its longest (central) uppertail coverts. These are the feathers at the base of the tail just below the rump. Red-breasted Flycatcher has brownish-grey uppertail coverts that are usually slightly lighter or the same colour as its tail, whereas a Taiga Flycatcher’s uppertail coverts are almost jet-black and are as dark or darker than its tail. 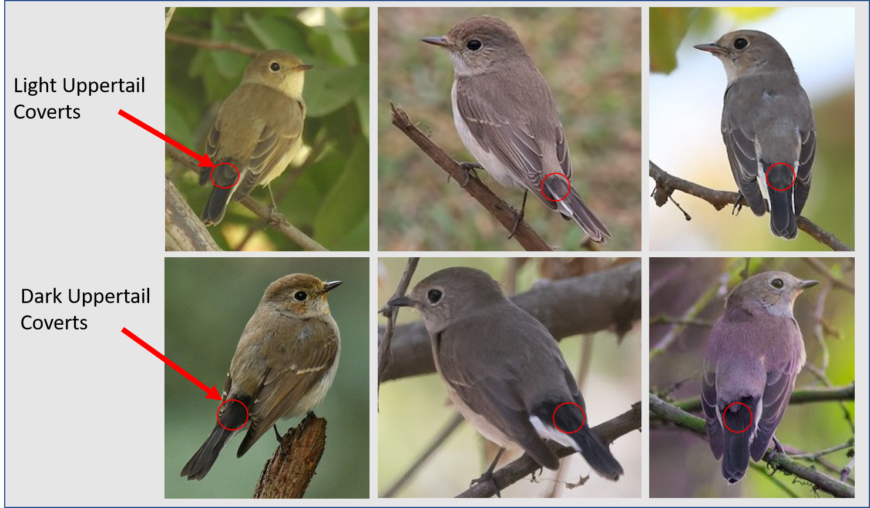 Note: Some additional differences in plumage that are sometimes used to identify female types are left out in this article because they are too subtle and often contingent on the light.

Call is by far the best way to tell female types apart. Both flycatchers call frequently during winter while simultaneously flicking their tail, possibly to defend winter territories from conspecifics. Both species have calls composed of repeated rattles. The rattle of a Red-breasted Flycatcher sounds like “trrrrr” where each individual note is distinctly discernible by the human ear. In comparison, Taiga Flycatcher has a faster rattle which may sound like a long continuous “drrrrrt” without individual notes being discernible. The recordings below and the spectrogram illustrate this point; observe the spacing between the individual notes.

Both species also have other vocalizations, most notably a ‘tik’ and sometimes a squirrel-like “cheep”.

Rufous on the throat and breast for an adult male Kashmir Flycatcher is more extensive than in Red-breasted/Taiga and is bordered by a bold black malar streak extending onto the upper breast-patch. Adult females are paler brown above and usually have a rufous wash to the breast (sometimes appears scaly or barred) that often extends to the lower belly and flanks. Sub-adult males have variable plumage and some may look similar to females while others have a variable amount of rufous on the throat like the adult males.

Note the rufous wash on the breast of this Kashmir Flycatcher

While this article describes key features that help with identification, remember that many of these features are insufficient when considered in isolation. Separating these three very similar flycatchers will often require you to consider a combination of features. A female type flycatcher with a dark bill, for example, can be any of the three. But a female type flycatcher with a dark bill, dark uppertail coverts and a ‘drrrrt’ call (with individual notes not discernable) is a Taiga Flycatcher! As we all know, Ficedula flycatchers are very active birds and may not always be cooperative. Sometimes all you get is a passing glimpse in a thicket. In such cases you can always identify the bird as “Red-breasted/Taiga Flycatcher” or “Ficedula sp.” and look for additional clues the next time. Happy flycatcher watching!

One thought on “Identifying Flycatchers: Red-breasted, Taiga and Kashmir Flycatcher”