Birds often see the reflection of trees and the sky in glass windows, balconies and fly into them. Studies show that many million bird deaths occur annually in the United States due to such collisions. Although in India many of us have come across such incidents, the scale of this matter is not properly studied or recorded.

Since 2019, Bird Count India has partnered with FLAP Canada in their citizen science campaign called Global Bird Rescue. The aim of this campaign is to document such collisions and build awareness. The campaign dates are from 5 -11 October 2020. To know more about this please see here.

There are several things a homeowner can do to prevent window collisions. Here is an interesting case study from Ms. Asmita Patwardhan, of a remedial measure she adopted to prevent birds from hitting glass railings. Architects like Asmita are conscious about how buildings can be better planned to prevent such bird fatalities. Read the story in her own words below.

Pune is a city that is exponentially growing, spreading in a concentric manner into the agricultural landscape that surrounds it. Malls, residential societies, schools, institutional buildings, and IT centers have sprung up in large numbers. But the fringes of Pune City still harbour small patches of natural areas, where wildlife continues to persist in the midst of buildings and urban structures. My family bought a flat in an apartment located in these fringes towards the end of 2013 and we have lived here since. Our building was built like any regular modern facility, in line with “current trends” or what is called the “contemporary” style of architecture. One such popular practice that the builders employed was to install glass railings or balustrades on the terraces. 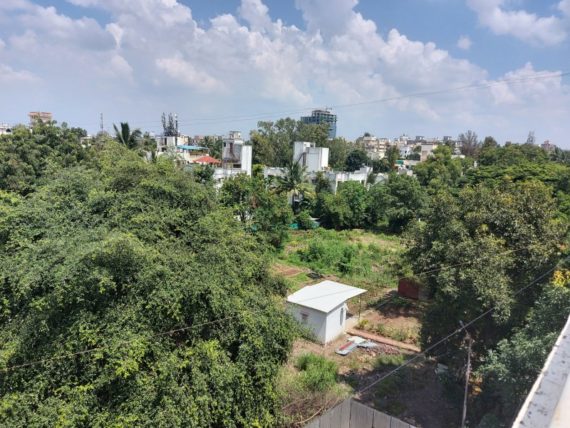 My flat is on the third floor and has an “open to sky” terrace. Being a green enthusiast, I immediately planted a garden that contained native plant species and fragrant shrubs. Within a year, my garden was steadily getting birds that were looking for food, water, and safe nesting spots. What followed, as a corollary, was disconcerting and extremely anguishing. We started getting bird hits! Some birds slammed into the glass barricade while trying to enter the terrace, dying in the process. After three or four hits spanning six months, we were determined to find a solution to the problem or even remove the glass railing completely. Because railings are a part of the external façade, changing its look is not a decision that one can take unilaterally, and hence we first decided to explore other options. 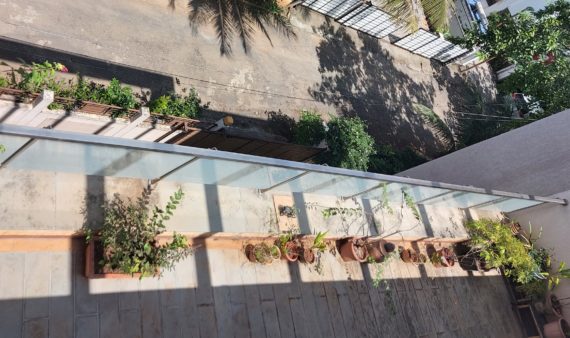 View of my balcony garden from the top

We got our first good idea from something we noticed on a subsequent trip to Greece. We saw a very long compound wall, fitted with large cut-outs in the shape of bird silhouettes potentially to deter birds from crashing into that surface. On returning, we started looking at materials and assembly options that would principally fulfill three conditions. First, it would have to be inconspicuous so as to maintain the look of the façade. Second, it would have to be resistant to extreme weather conditions as Pune endures cold winters, harsh summers, and a significant amount of rain. Third, it would have to be something that would not harm or obstruct birds in mid-flight. We concluded that all three conditions would be met if we could find a frosted film with an etching pattern to paste on the glass railing, making the glass opaque and visible to birds.

We looked for options in the market and found out about polyester sticks on film that is used mainly in interior design projects to control privacy and visibility between spaces. A range of products that were available in the market, sold under various brand names, appeared suitable for our purpose. We decided to buy rolls of 3M decorative glass film, which were inexpensive and easy to install. Our intervention turned out to be a resounding success! Not a single bird collision has happened in the three years since, and the film has not warped, torn or chipped anywhere along the entire length of the railing. The happiest moment for us was when two sunbird nests were made on our terrace this year, and we had the peace of mind that we were successful in making a hostile environment turn into a safe haven for birds. Small, innovative, and sensitive efforts on our part can definitely improve the life of the species with whom we share this world and that’s the least of what we owe to them. 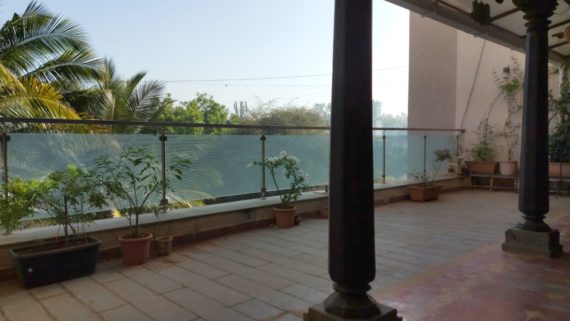 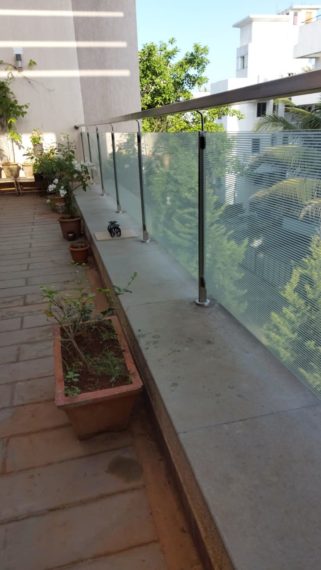 A closeup of the glass panel after adding 3M decorative film.

I am an architect, teacher, poet, and nature enthusiast residing in Pune. If you wish to reach out to me, please email me at asmita73@gmail.com