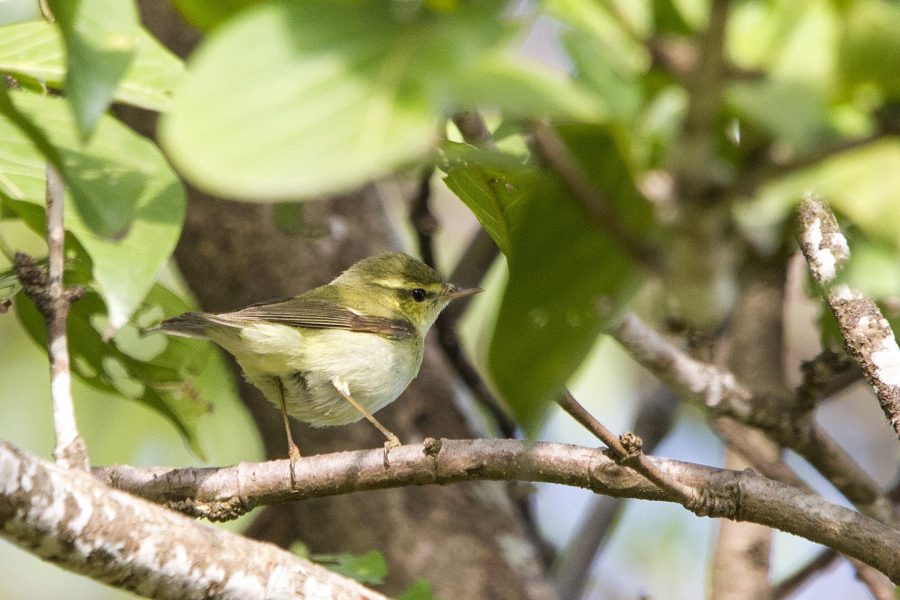 Green and Greenish Warblers have always been notoriously difficult to tell apart. Till recently, Green Warbler (P. nitidus) was considered to be a subspecies of the Greenish Warbler (P. trochiloides). Considering the difficulties involved in identifying the two species in the field, I hope the few pointers here are helpful. Do note that the species are best separated by a combination of  call and plumage*.

The subspecies of Greenish Warbler in our region are the nominate trochiloides, ludlowi (not discussed here) and viridanus. P. viridanus is known to breed in the N and NW Himalayas as well as Europe and winters extensively in S India. While some individuals do spend the winter in N/NW India, they pass through that region in larger numbers on passage. The nominate subspecies (trochiloides) is known to breed in C and E Himalayas and winters mostly in E India although individuals are known to straggle all the way across to S India as well.

Note: In the coastal region in the states of Kerala, Karnataka and Goa, the Green Warbler is a lot more common than the Greenish Warbler.

*In our region, most migratory Phylloscopus sp are likely to show worn plumages in the latter half of winter (January to April), and so call is an important additional diagnostic.

Behaviour: Similar in both birds.

Quick, nervous movements with regular wing- and tail-flicking by both species. Also noted to hover and make sallies. While they may occur across all strata of vegetation, both prefer trees (of all sizes) as opposed to shrubs and bushes.

Bill: Similar for P. nitidus and P. t. viridanus (pale lower mandible in both birds). P. t. trochiloides has a darker bill (the lower mandible shows some pale at the base). 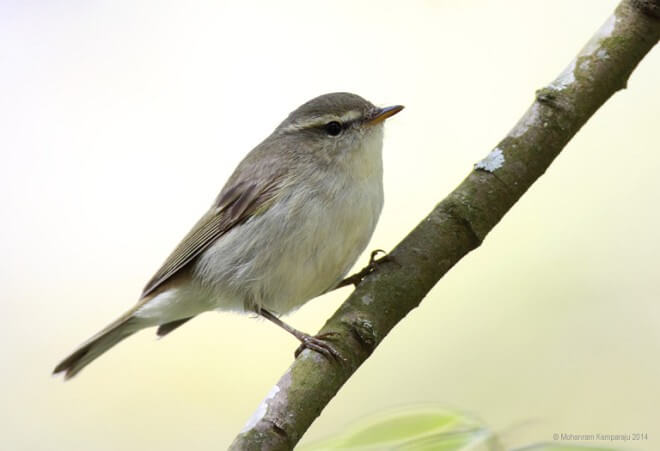 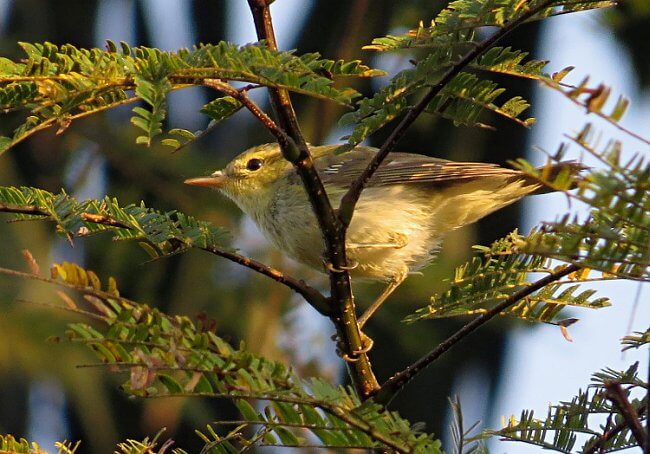 Range: Based on current knowledge, the Green Warbler seems to be more restricted to S, SW India and Sri Lanka than the Greenish Warbler – which is widespread across the subcontinent.

The following migration maps clearly illustrate the differences in the summering as well as wintering ranges of the two species: (Look at how some Greenish Warblers ssp viridanus travel all the way to India from central and eastern Europe!)

Green Warbler – summering in Turkey and around the Caspian Sea, wintering in S India and Sri Lanka

Plumage: Green is generally brighter, more marked than Greenish – but be wary of moult! 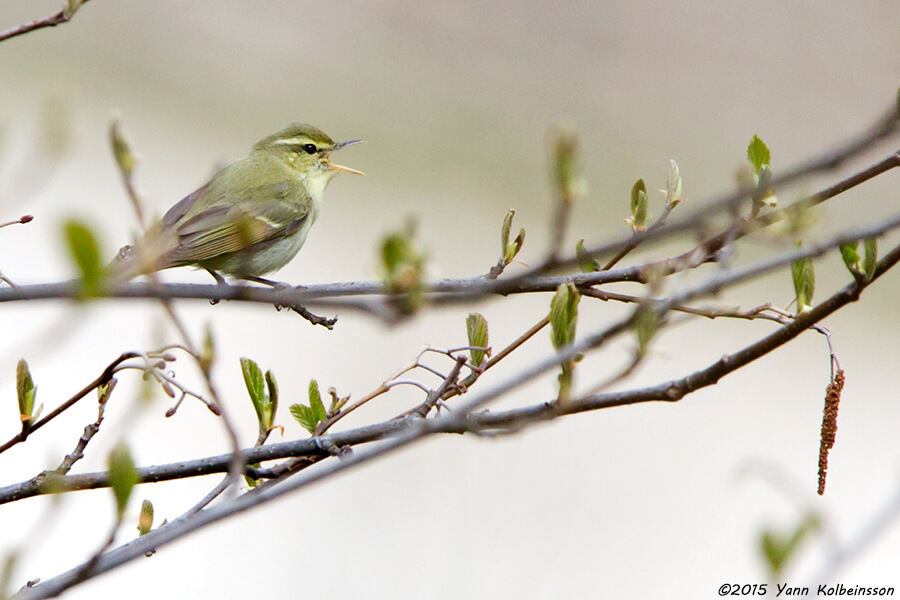 In fresh plumage, Green Warbler shows a distinct yellow wash on the face (including supercilium) often running all the way down past the throat to the breast. It is visibly bright green above and usually shows two distinct white wing bars – with the second wing bar appearing thicker and more prominent.

In contrast, a Greenish Warbler in fresh plumage is duller green above, dull whitish below with some mottling and shows one wing bar. 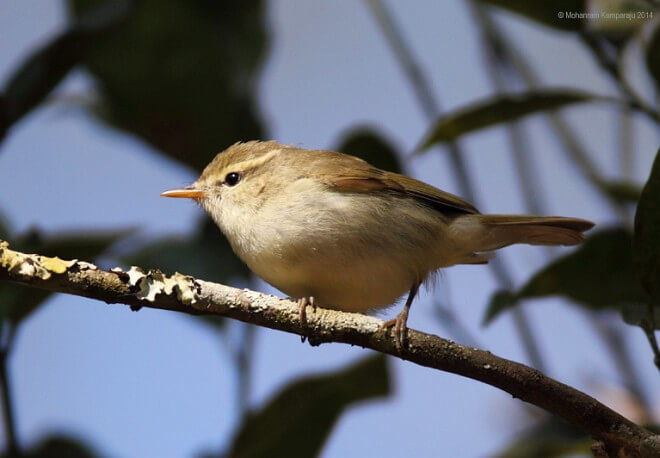 In worn plumage, most Green Warblers shows the second wing bar, but it may appear broken, weak or missing in the most extreme cases. The upperparts are not as bright as fresh plumage and become “greyer” while the yellow is reduced in brightness and extent, though the supercilium and face retain a yellow wash unlike on Greenish Warbler. This plumage may resemble a viridanus ssp of Greenish Warbler in fresh plumage with the exception of the yellow on the  face. 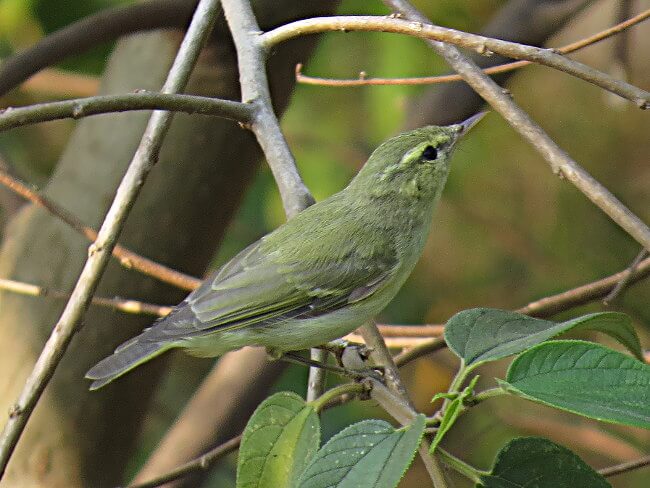 On a Greenish Warbler, the wing bars may wear off altogether – thus giving it a very plain and dull appearance. The viridanus ssp is especially uniform and plain overall while the nominate shows mottled, slightly darker underparts and contrasting flight feathers when wing is closed. 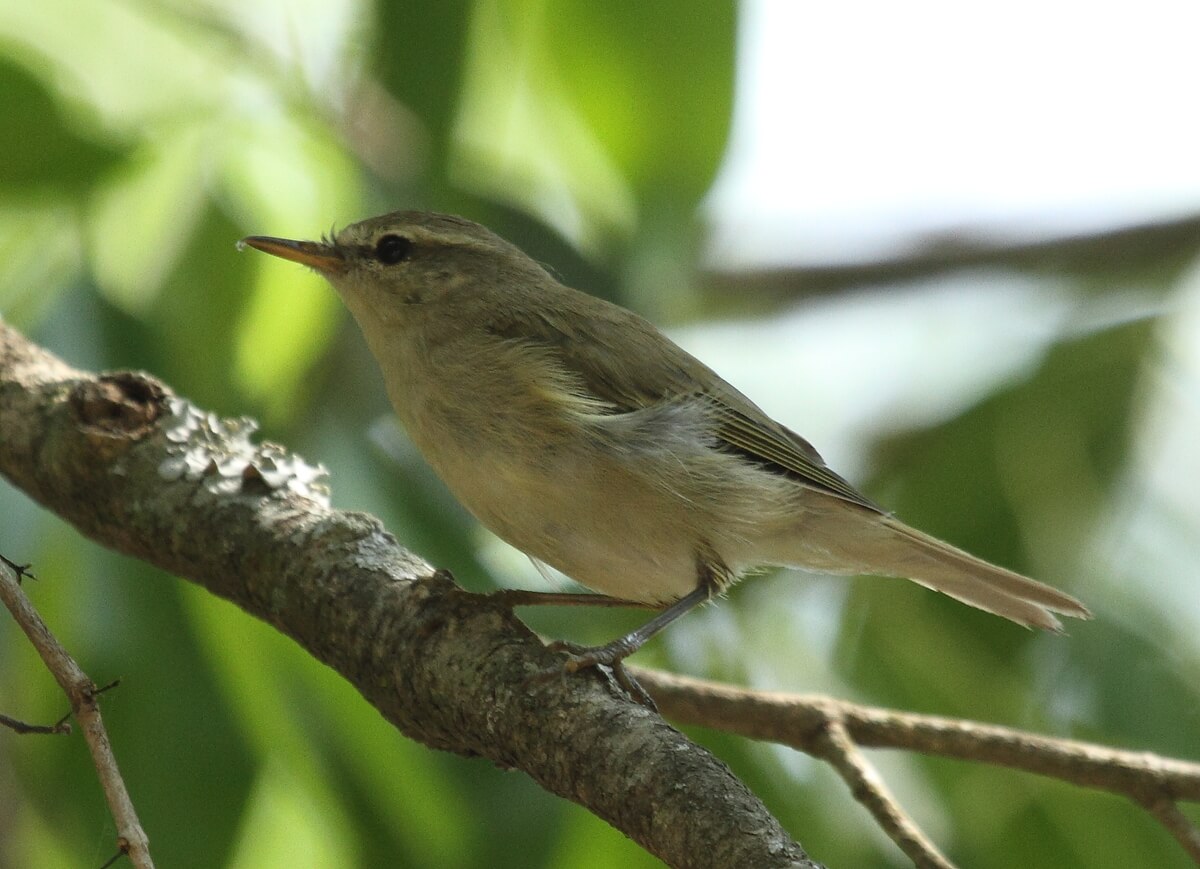 Call: With some practice, it is fairly easy to tell Green Warbler apart from Greenish Warbler by call.

Green Warblers have a trisyllabic call that can be transcribed as a “chi-su-wee”. The middle syllable may often be hard to catch by ear and the call is often delivered so fast that it may just sound like a slurred note. However, once familiar – it is hard to mistake the call with anything else. The call, as can be seen from the sonogram, ends with an upslur (the sound rises in pitch).

Greenish Warblers have a distinctly disyllabic call. The call of the viridanus ssp is more subtle, often sounding like a “chee-up” (not unlike a Brooks’s Leaf Warbler, for those familiar with the species). The first syllable is more pronounced than the second syllable, which is abrupt and ends with a downslur (sound falls in pitch). The call of the nominate ssp is an even more obvious disyllabic “chiwee” that is perhaps more reminiscent of a Hume’s Warbler. However, the call of the Hume’s Warbler is less slurred, louder and “sweeter” sounding than nominate Greenish. 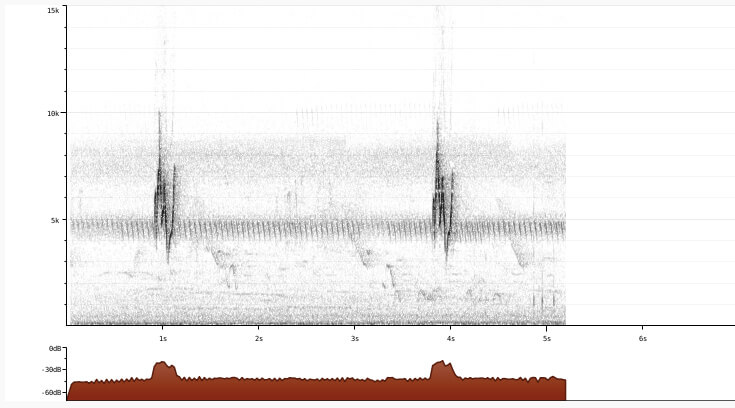 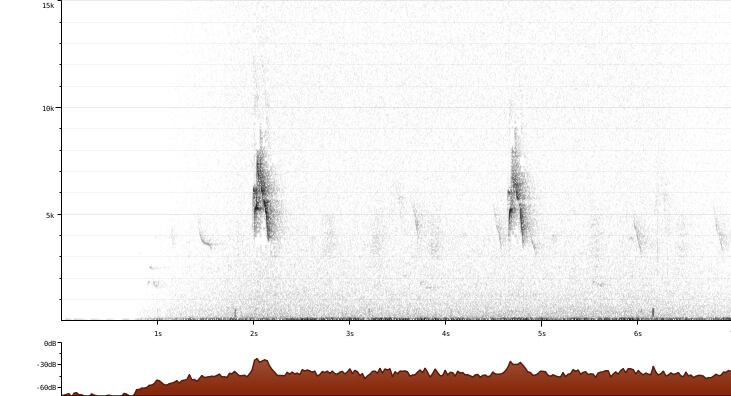 Sonogram for a Greenish Warbler viridanus with a simpler, disyllabic call © Stuart Fisher 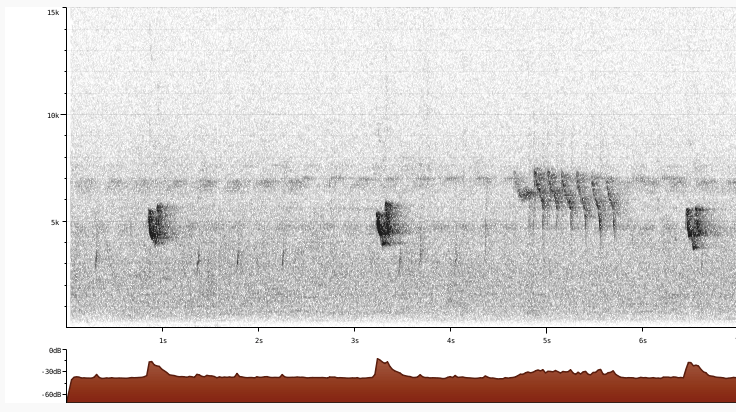 Note: It is often worth waiting for a regular bout of calls to begin since both warblers do vocalize with slight variations to the “typical” call. When vocalizing again after a break from calling, Greenish Warblers (especially viridanus) often call with a single note. Green Warblers, too, occasionally chatter with a disyllabic call for a long time (especially when excited), thus sounding much like Greenish Warblers!

Nice blog, Ramit. Very useful to us. I think nitidus is much under-reported from SW India?

Thanks for your comment, Shashank! While it is quite possible that there must be a few incorrect IDs along the range that P. plumbeitarsus is being misIDed as P. trochiloides given the awareness levels amongst many birders of identification as well as taxonomic issues involving the two.

However, it did prompt me to look up the maps for Two-barred Warbler as reported on eBird (so certainly not an issue with taxonomy followed on eBird) and the ranges are quite how you describe them to be:

There is also a slash available in eBird, Greenish/Two-barred Warbler, for people in the overlapping region to park their records. Apparently being well-used in SE Asia.

Warblurs ID is till difficult for me in the field.But above information is quite helpful for me.Recently I saw warblures with Chick…Chur call & active as mentioned above,w.r.t. XenoCanto & other book references I concluded it as Blyth’s Reed.

Very informative Ramit. Thank you for educating us.

Very much informative, and is simply explained. Thank you very much

Hi Ramit. I’m first time in Pondicherry (now 9 December). I’m seeing a completely gray/brown warbler, pale below with prominent wide supercillium that extends well past the eye and widens. It has clear, loud “chuck” or “chick” call. I’m not hearing song. No wing bars. Slight whitish in shoulder “notch”. My first guess was “dusky warbler” which is not supposed to be here. Then I thought maybe Blyth’s Reed Warbler, but supercillium looks like Phylloscopus. Now I’m seeing your post and think probably based on commonality for region I’m seeing a drab Greenish Warbler. Any help would be appreciated.

It sounds like you might be seeing a Booted Warbler or a Sykes’s Warbler. Aside from the Dusky Warbler, which is very unlikely to be found in Pondicherry, the sound you describe does not fit any of the other leaf warblers.

Perhaps you can try and take a recording of the call with your phone? Or a photo?

Hello Ramit, i recently observed two different warblers at the same time. One with having wing bars, prominent supercillium with dark underline, darker bill and legs and other one had pink lower bill, wing bars missing and also has supercillium with underline which was quiet relatively more visible. Is it any chances that greenish warbler could differentiate with green warbler by color of bill?