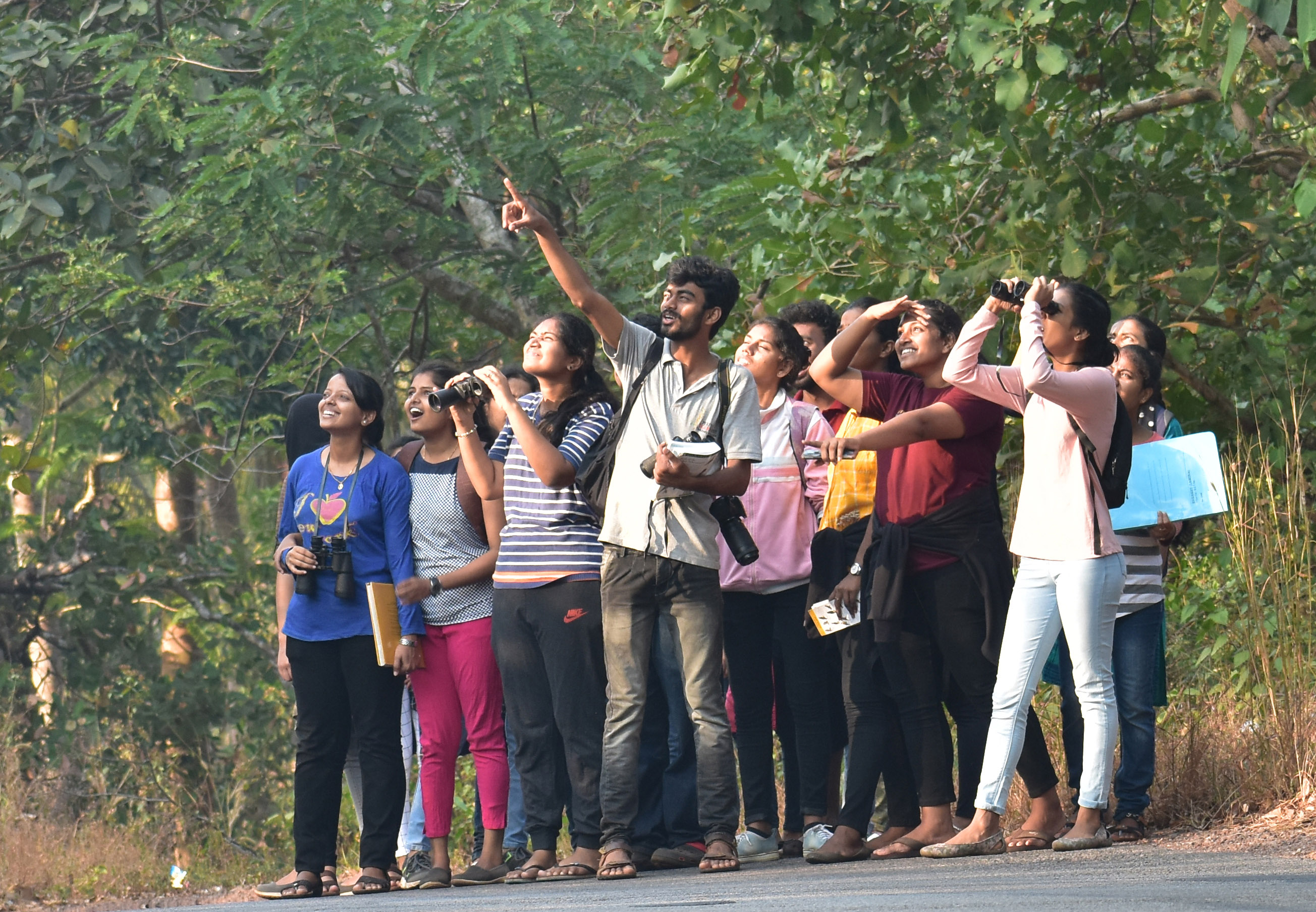 The Great Backyard Bird Count is a 4-day birding event that takes place every year in February. During this event birders across the world spend at least 15 min recording the birds they see and hear. Since GBBC is carried out at around the same time of the year, it helps to create an annual real-time snapshot of what birds are where. Every year thousands of bird watchers are seen participating in this event and also introducing new people to birds and birdwatching. This is the eighth year that the GBBC has happened in India, and 2020 saw a leap in not only in participation but also in checklists and species compared with 2019.

During India’s first GBBC in 2013, around 200 birders uploaded 438 checklists and reported 537 species. Since then there has been a tremendous increase of participation every year.  Today we are pleased to see the amount of passion and excitement displayed by all of you birders to make GBBC a successful event.

This GBBC around 2,018 birders from 309 districts in India uploaded 24,966 checklists, spent a total of 12,433 person-hours birding and recorded 924 species–70 % of the total number of species known to occur in the country! 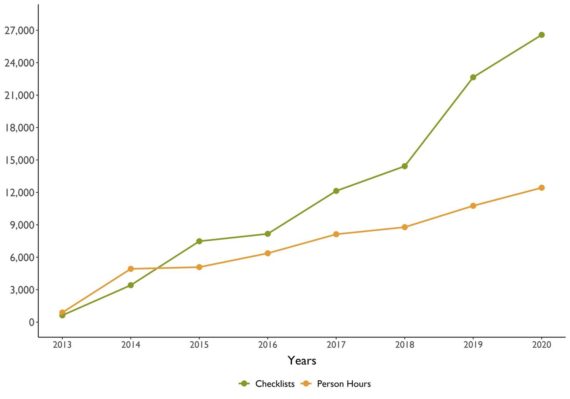 A big thank you to all our state coordinators and to everyone who organised bird walks and talks on campuses and elsewhere in the country. Thanks to all the reviewers for reviewing submissions at the end of each day. 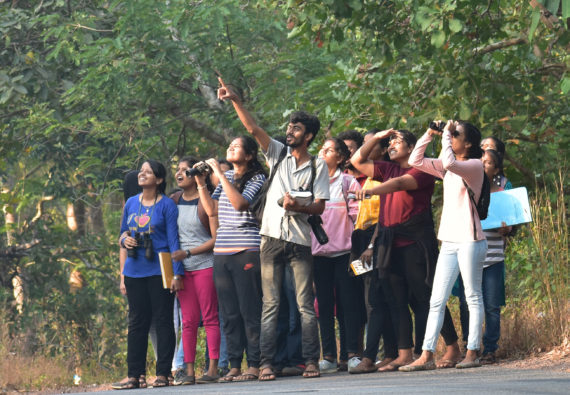 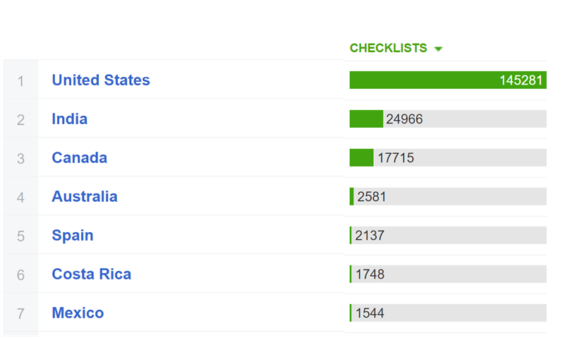 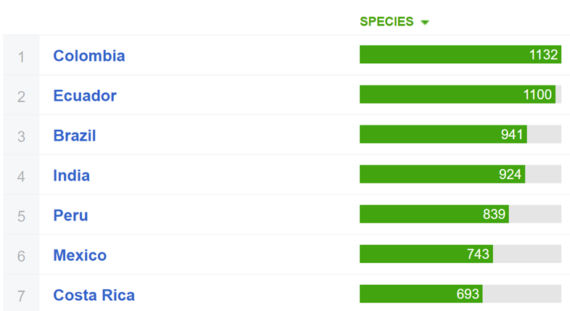 View the full country-wise breakdown by species and checklists on eBird.

Although only 48% of districts in India were covered, there was participation from nearly every state and union territory! In the map below, each list contributed to GBBC is shown as a translucent circle. Deeper yellow indicates overlapping circles, which signal more lists from that location.

The top three birded states in terms of checklists were Tamil Nadu, Kerala, and Uttarakhand, with Tamil Nadu uploading a whopping 11,938 checklists. Salem district in Tamil Nadu alone submitted 10,455 checklists during this GBBC 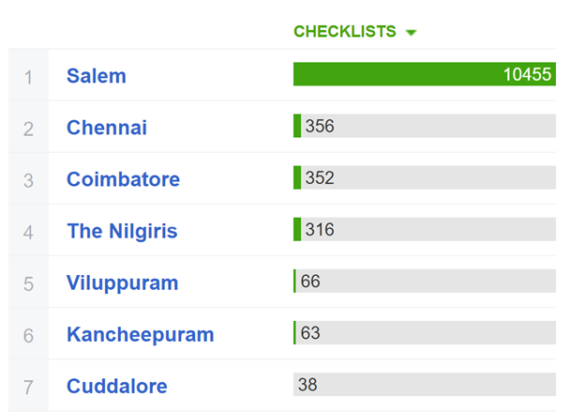 The state and district-level coverage of GBBC 2020 based on checklists are shown below. To view summary (number of checklists, participants, species), please click on a state/ district in these zoomable maps. Click on the green balloons to view interesting sightings.

The map below shows the top 5 most common species in terms of their frequency of reporting, in seven broad regions in India. While purple sunbird was common species in the West last year, this year it was replaced by Black Drongo which was reported in 43% of the lists. Last year, in the South, Rose-ringed Parakeet took the 3rd spot in the commonest species with 35% of the lists reporting it. This year it gets replaced by Feral Pigeon. In Central, the Black Drongo and Green Bee-eater show up in between 43-44% of lists this year displacing House Crow and Feral Pigeon from last year. In the East, this year the House Crow was among the top 5 common species replacing Asian Pied Starling.

GBBC 2020 has not only seen an extraordinary increase in terms of participation and checklist submission but also an incredible increase in terms of reporting new species. A total of 924 species were reported of which 24 were newly reported this GBBC!  All GBBC editions put together, the overall species count is 1054 species.

Although Feb is a bit early for the cuckoos to be vocal, it is interesting to know that 13  species were reported during this year’s GBBC of which half were from Andaman and Nicobar Islands alone.

While no Lesser Cuckoo was reported in 2019, this year saw 2, one from the Andamans and the other from Kerala! The entire breeding population of Lesser cuckoos winters in Peninsular India, Sri Lanka and East Africa. In February, there are very few records of the species on eBird from Peninsular India. As such, any sighting is bound to get a birdwatcher very excited.

Another rare species for this time of the year is the spectacularly colorful Asian Emerald Cuckoo. This year’s sighting marks the first time the species has been seen during a GBBC in eight Indian editions!

Some interesting sightings this year from the coasts were that of Masked Booby from Kerala and Lesser Frigatebird from Karnataka.

Little Gull, also the smallest gulls in the world, was reported this year from Pong Dam in Himachal Pradesh.  This is an uncommon species for India and so far there are only 3 records from India in eBird.

Marbled Teal, a rare winter migrant, was reported from Rajasthan. The sighting of this species brings a lot of excitement amongst bird watchers as it has suffered a steep population decline in its wintering grounds and is listed as ‘Vulnerable’ by the IUCN.

Another Vulnerable species is the Black-necked Crane, that got reported from Arunachal Pradesh. Less than 20 individuals are known to winter in Arunachal. Based on its range size and abundance trends, this species is categorized under ‘Species of High Concern’ according to the recent report- ‘State of India’s Birds‘.

Some birds prefer staying close to undergrowth, dense bushes or play an inconspicuous role in their habitats. Such birds are often on the top lists of birders who often have to content themselves with brief sightings. This year, the Blue-breasted Quail, Baikal Bush Warbler, Bar-winged Wren-Babbler were reported from the East.

The Rufous-vented Grass Babbler and the Cetti’s Warbler were reported from the North.

Open ecosystems like grasslands, scrublands, and meadows are some of the most threatened systems in India. It is heartening to see birders report a number of open habitat species such as Australasian Grass-Owl, Burmese Shrike, White-crowned Penduline-Tit.

Brambling, a brightly coloured finch from Eurasia and winter migrant to the Himalayas was also reported.

The table here shows all the 24 new species reported in GBBC 2020.

Here are some of the most enthusiastic participants (individuals and groups) who uploaded more than 100 complete checklists of at least 15-minute duration.

Top birders in each state, in terms of number of checklists uploaded 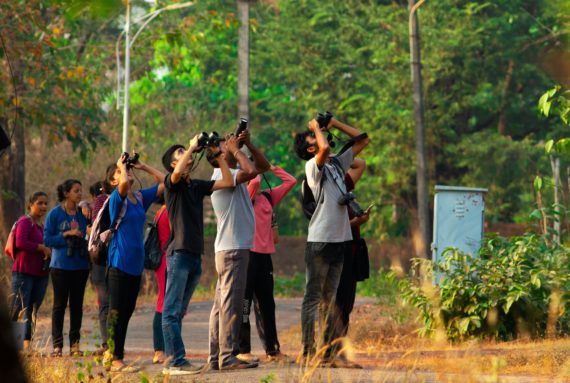 Table of top 10 campuses in terms of species reported

Table of top 10 campuses in terms of checklists submitted.

(NB: the numbers on the eBird website may differ a little from those presented here because of slight differences in methods of calculation)

There were over 97 bird walks and talks organised across India, with a large number of school and college students and the larger public introduced to birding at educational and research campuses, lakes and other public spaces. The full list of registered events is here.

GBBC in the News

GBBC 2020 was coordinated by Bird Count India and its various partners. For more information, see the following links.

View the next page for the state coordinators for GBBC 2020.