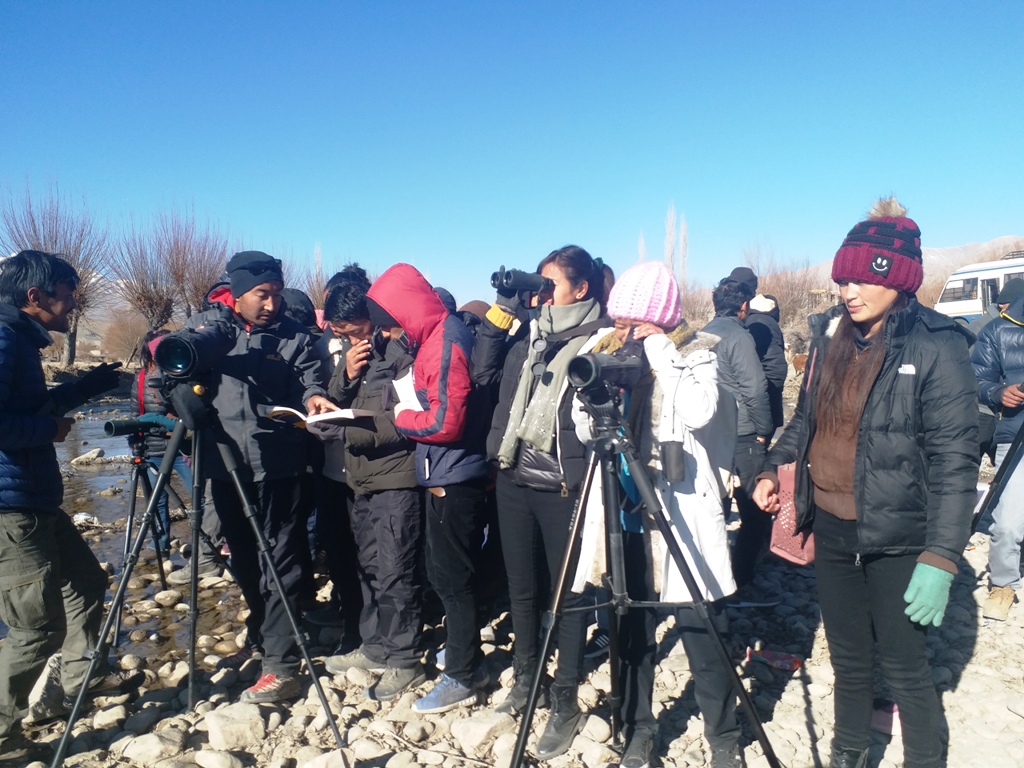 The global Great Backyard Bird Count takes place every year over four days (Friday – Monday) around the middle of February. Since it is carried out at around the same time every year, GBBC helps create an annual, real-time snapshot of what birds are where. The excitement of this event can be contagious, and this makes it a great platform to introduce people to birds and birdwatching.

GBBC 2019, which took place from 15th – 18th February 2019, was the seventh in India. Over the four days of this event 1,786 birders in India uploaded 22,273 lists, spent a total of 10,764 person-hours birding and recorded 852 species— 65% of the total number of species known to occur in the country. In addition to backyards, birders flocked to all kinds of ecosystems in India, spanning forests, scrublands, high-altitude national parks and coasts.

A big thank you to all our state coordinators, everyone who organised bird walks and talks in campuses and elsewhere in the country, and the reviewers for reviewing submissions at the end of each day. 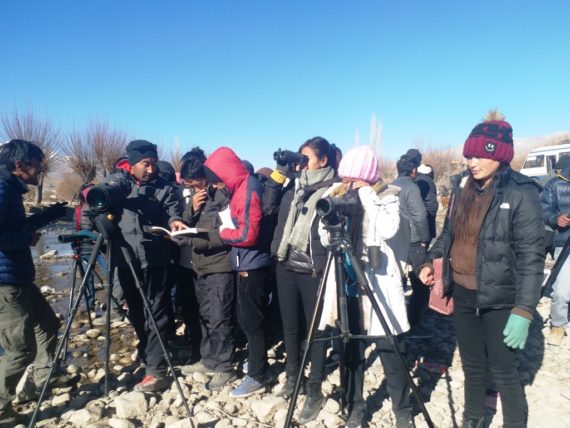 Every GBBC in India bumps up the tallies from the previous years and this year was no different, with higher number of checklists, participants, person-hours clocked, districts covered and species reported, compared to previous years: 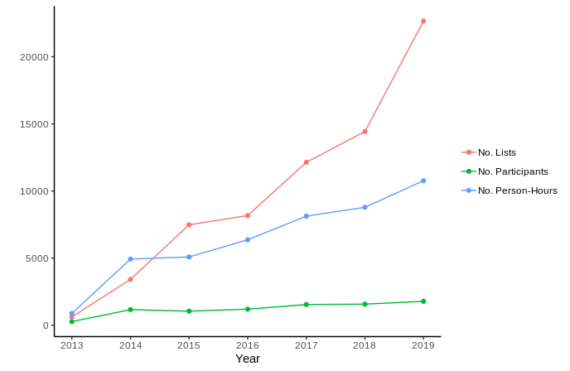 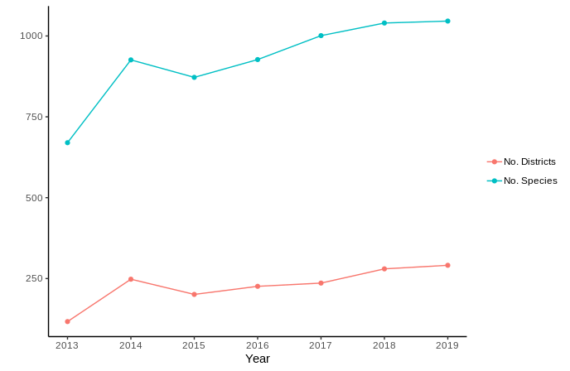 GBBC India over the years (2013 – 2019): number of participating districts and number of species recorded

Interestingly, of the 13.7 million records from India on eBird, 1 million have been uploaded during the various GBBCs (2013 to 2019). In other words, just 28 days over the previous 7 years account for 7% of the information available on eBird in India!

Notably, among all the districts in the world (‘counties’ in eBird parlance), Salem, a district in Tamil Nadu had uploaded the most number of checklists– 8420! 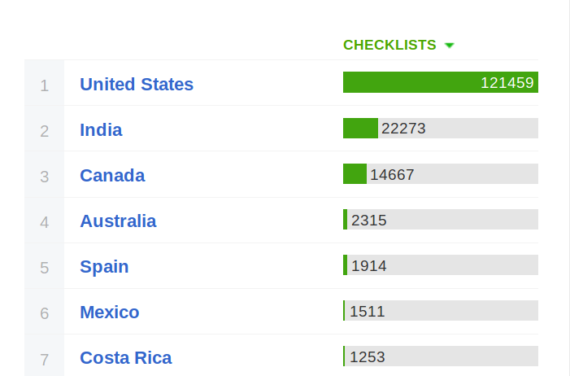 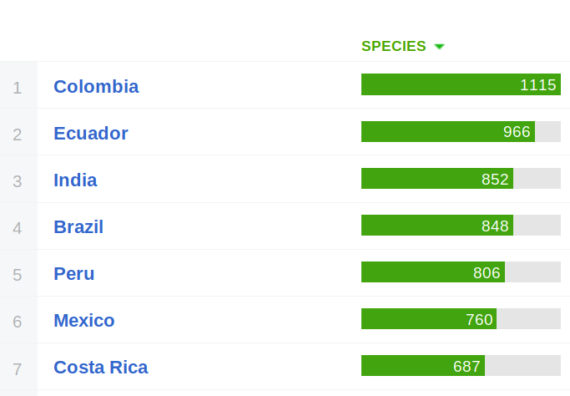 View the full country-wise breakdown by species and checklists on eBird.

Although only 40% of districts in India were covered, there was participation from nearly every state and union territory! In the map below, each list is represented by a translucent red circle, with darker colors indicating multiple lists from the same adjacent locations. 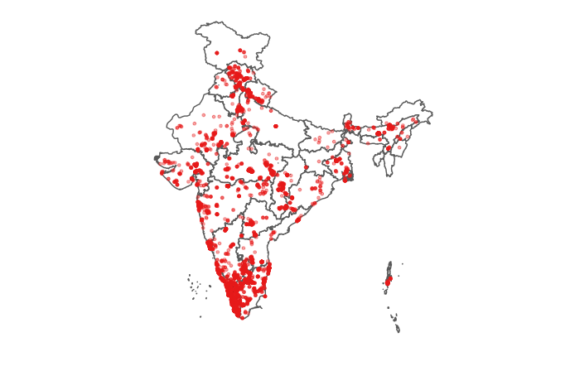 The top three birded states in terms of checklists were Tamil Nadu, Karnataka and Kerala, with Tamil Nadu uploading a whopping 10,111 checklists.

The state-wise breakups of species, participants, checklists and coverage of districts are shown in the maps below. 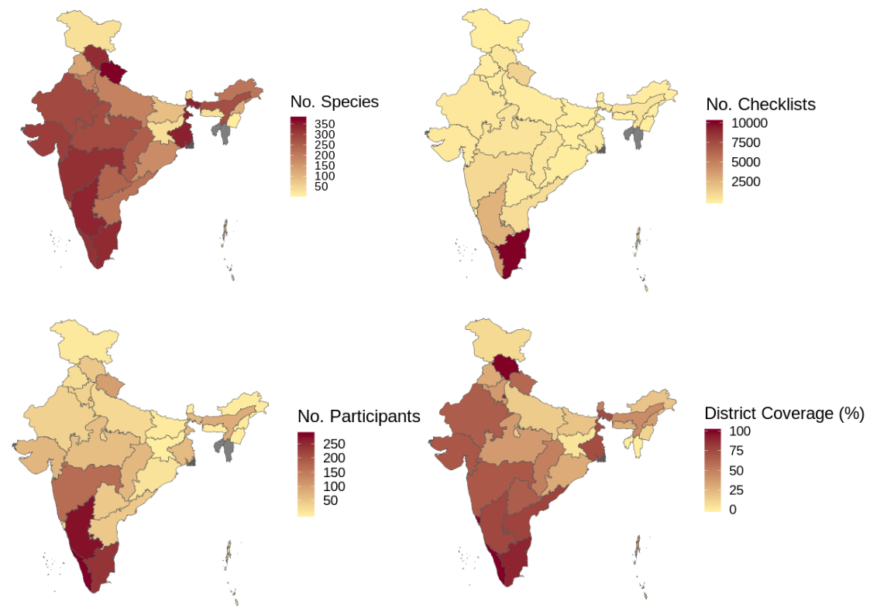 Delhi, Tamil Nadu, Kerala, Himachal Pradesh, Goa and Chandigarh had higher than 80% district coverage, i.e., GBBC participation in more than 80% of districts in the state.

The top ten districts in terms of participants are in the table below:

GBBC 2019 recorded 15 species that had not been sighted in the previous GBBCs, including winter migrants like Merlin and Eastern Spot-billed Duck and several rare species like Plain Leaf Warbler and Long-billed Wren Babbler.

Some birders get a particularly acute case of GBBC fever– the best kind of bird flu– and spend most of their waking hours birding. The world’s top ten GBBC participants, ranked by the number of complete checklists uploaded, were nearly all from India, with 6 individual participants and 3 group accounts (view the full list of the top 100 participants here).

Here are the top dedicated birders in India, who uploaded 100 or more complete checklists of a duration greater than 15 minutes:

Top birders in India, who uploaded a hundred or more complete checklists
(NB: the numbers on the eBird website may differ a little from those presented here because our data totals are as of 16th March)

And the top 5 dedicated birders, in terms of the number of checklists they uploaded, in the different states. A big thank you to everyone!

Top 5 dedicated birders in each state, in terms of number of checklists uploaded

Several group accounts were among the top 10 in terms of the number of checklists uploaded and hours spent birding. Among these were Salem Ornithological Foundation, Salem Krishnampudur School Students and Salem Latchumayur School Students in Tamil Nadu. 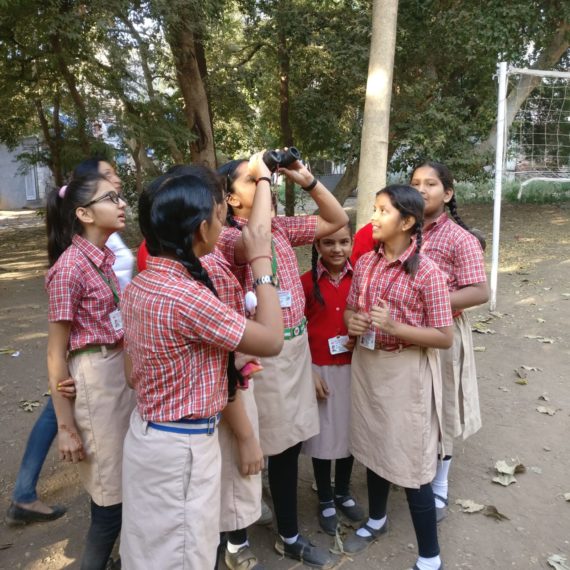 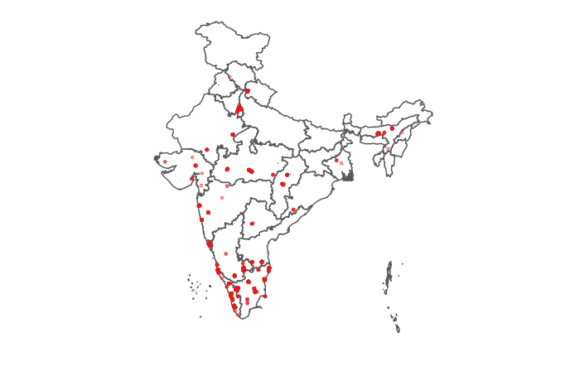 Several people put in coordinated efforts to cover the entire area and different habitats of their campuses. The campuses with the top ten highest number of checklists and species are in the tables below:

Campuses with the top 10 highest number of species

Campuses with the top 10 highest number of checklists
(NB: the numbers on the eBird website may differ a little from those presented here because of slight differences in methods of calculation)

There were over 120 bird walks and talks organised across India, with a large number of school and college students and the larger public introduced to birding at educational and research campuses, lakes and other public spaces. The full list of registered events is here. 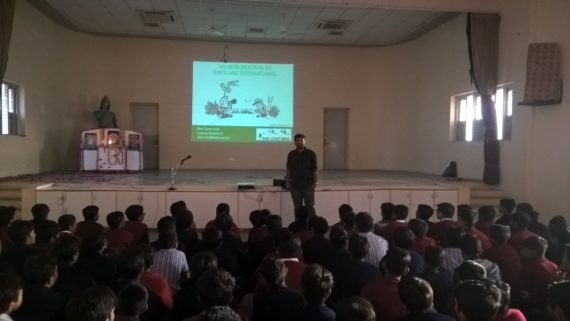 GBBC in the News

There was a lot of news coverage for GBBC this year. Some of the articles are below:

GBBC 2019 was coordinated by Bird Count India and its various partners. For more information, see the following links.

60% of districts in India did not have participants in GBBC 2019. By focusing our attention on these districts before the next GBBC, we hope to increase participation and country-wide coverage in GBBC 2020. The table below shows ten states with the lowest district coverage.

A lot of the value in collating bird observations comes from regular monitoring of the same location over a period of time. This is the focus of “patch birding” as well as more structured surveys, the latter being ideal for a campus. Please keep watching and recording birds, and consider how you could make your observations count more for science and conservation. Do contact us for more ideas.

Until then, keep birding!

View the next page for the state coordinators for GBBC 2019.