Another record-breaking GBBC in India! Nearly 12,000 lists from almost 1,500 birders clocking up close to 8,000 hours birding and recording an impressive 825 species. Birders in India visited 37% of the districts in the country, spending time not just in national parks and wildlife sanctuaries, but village tanks, parks and gardens, and from their own homes.

As well as the statistics described below, to relive the excitement of GBBC, or to appreciate a little bit of the atmosphere if you were unable to take part, read various accounts from some of the participants across the country. We’d also like to thank the state coordinators and those who organised counts on campuses and elsewhere around the country. 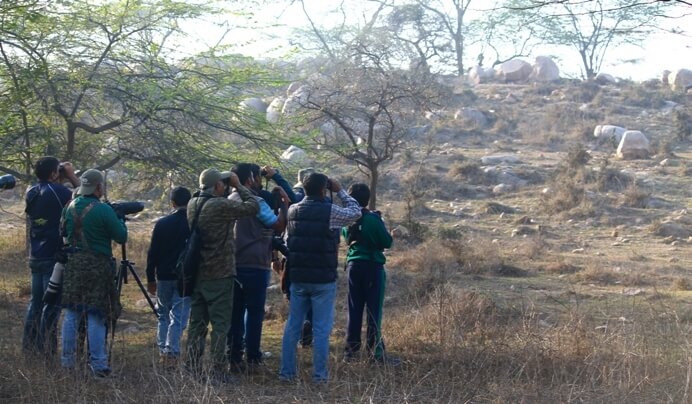 The global Great Backyard Bird Count takes place over a long weekend every February. Its aim is to encourage people to go birding anywhere, recording and sharing their observations on the eBird website, and hopefully introducing others to this wonderful pastime. This was the fifth year that India has participated, and with record numbers of birdwatchers!

Compared to the record-breaking 2016, this year saw even more effort, with 31% more participants spending 36% more time in the field, and recording 50% more lists and 40 more species. 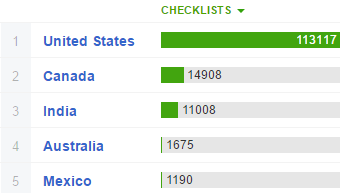 As with last year, India was third globally in terms of the number of checklists submitted, behind just the United States and Canada. The 21% more unique (i.e. ignoring the number of eBirders a list was shared with) lists compared to last year continues the year on year growth trend in India.

The honours for the most number of species from a single country went to South America this year, with Colombia recording a fantastic number of 955. 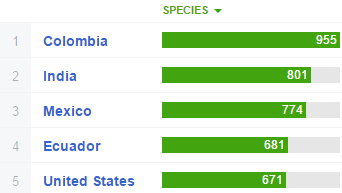 India’s total of 801 is most impressive though, especially as it represents 61% of the total species known to occur in the country. By contrast Colombia “only” recorded 50% of their avifauna: the country is home to nearly 20% of the entire world’s species!

It would be interesting to see how many more species it is possible to see in India with concerted and planned efforts to conduct birdwatching during GBBC in remote and important bird areas, such as much of the northeast that typically has relatively little coverage.

NB: Number of lists and species shown by the GBBC website differs from those used for analysis, as the GBBC total includes only lists uploaded by a cut-off date of 3rd March, whilst GBBC India analysis has considered all lists uploaded by 9th March.

As last year, lists were recorded from 30 states and union territories; whilst Lakshadweep and Tripura were added this year, there were no records from Meghalaya or Nagaland, despite their representation in 2016. District coverage increased overall however, with birding visits to 236 (37%) districts nationally.

Each list in the map below is shown as a translucent circle, hence darker areas represent multiple lists from the same or adjacent locations.

Although it’s of limited use to actually determine population and range trends, it is always interesting to look at the “commonest” species. Overall House Crow was the most frequently reported species, appearing on 48% of lists. 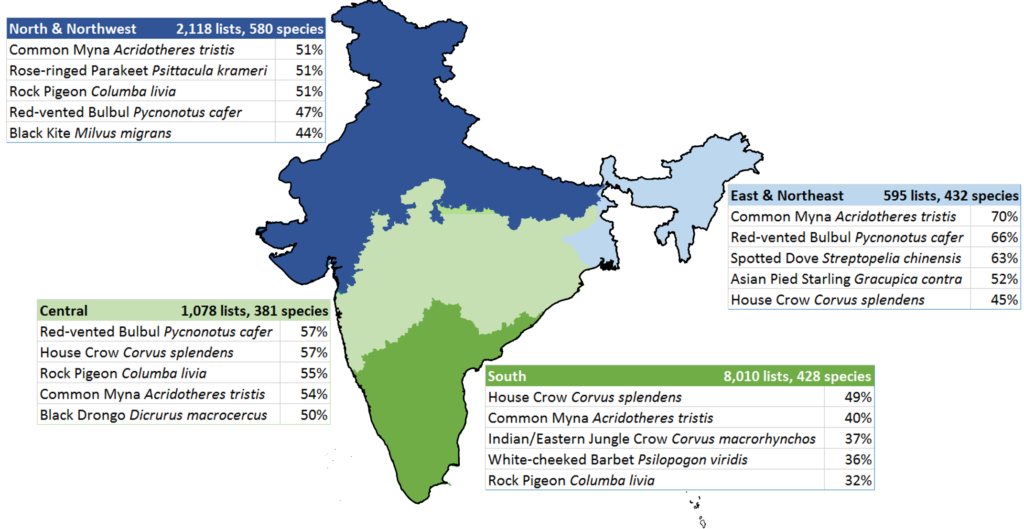 With the country categorised into four regions, there is actually a different “commonest” species for each region, as depicted in the figure below. As with last year, Common Myna is the only species to occur in the top five for each of the four regions, with Rock Pigeon, Red-vented Bulbul and House Crow all making the top five in three regions.

The top six birded states in terms of number of lists were exactly the same as last year. With the exception of the most birded state, Kerala, the others all recorded well over 300 species each. The number of lists and species per state are shown in the graph below. 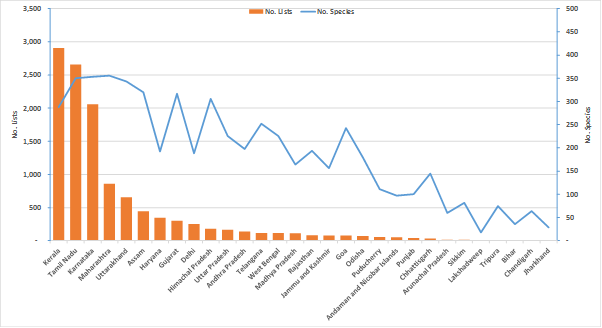 Lists and Species per State

Nationally 1,449 registered eBirders took part and recorded at least one list. In reality many times this number birdwatched during GBBC, especially through the various organised bird walks and the Campus Bird Count.

The table below shows the top participants (including some group accounts) per state/union territory, based on number of complete lists recorded.

Some people get especially addicted to birding during GBBC, spending most of the daylight hours birding! The top dedicated GBBCers (based on number of complete lists and total birding hours) are shown below: thanks very much to them for their efforts.

Top Individuals by No. Complete Lists

This dedication is recognised globally as eight of the top ten participants in the world in terms of checklists submitted were from India, and Indians filled four of the top ten places globally for number of species recorded!

In India the Campus Bird Count also takes place as part of GBBC. This is an important exercise for documenting birds in places that can be overlooked but often provide valuable habitat, as well as introducing many young newcomers to birdwatching and monitoring.

Campuses may belong to educational and training institutions of any kind, government institutions, research stations, corporate campuses or even residential campuses and colonies. Overall an impressive 44% of the GBBC lists were from the Campus Bird Count, and there was 50% increase in participation compared to last year.

Those institutions that completed the most lists are shown in the table below.

We are very grateful for the various people who acted as state coordinators, helping with the various campuses in their area.

Visit the Campus Bird Count Results webpage to see the full results and browse the data.

Many great photos of both birds and people were submitted to the GBBC Photo Gallery, and these encapsulate the spirit of the event superbly. A selection is shown here, but do view the entire gallery.

There was excellent coverage in both national and regional media about the GBBC and CBC. A few examples are shown below. 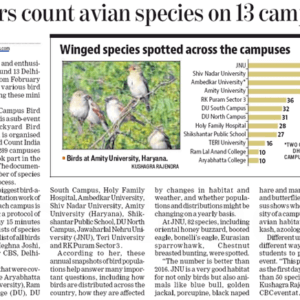 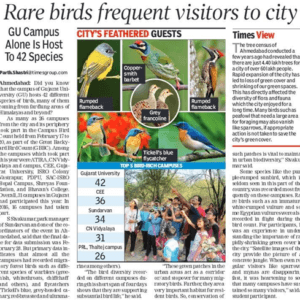 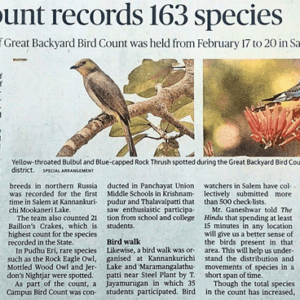 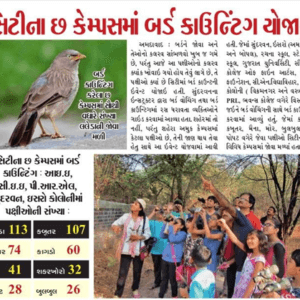 GBBC 2017 was coordinated by Bird Count India and its various partners. For more information, see the following links.

A lot of the value in collating bird observations comes from regular monitoring of the same location over a period of time. This is the focus of “patch birding” as well as more structured surveys, the latter being ideal for a campus. Please keep eBirding and consider how you could make your observations count more for science and conservation. Do contact us for more ideas.

View the next page for the full list of 2017 participants.