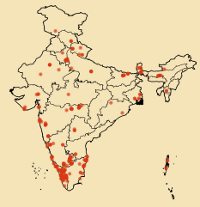 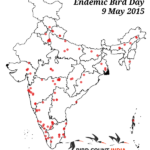 I will participate in the Endemic bird count on 9th May from Thiruvannamalai, Tamilnadu.

I will be doing the Endemic Bird count at Sinhagad valley on 9th May from 7.15 am to 11 am

Great projcet, I’ll be joining from Periyar.
FYI there’s no link to this page from the birdcount.in front page or events page…

Thanks. Yes, we’ll put up a link from the home page — thanks for the reminder!

Thank you Sir. If you can spare a few seconds to register your name on this form that would be very helpful. Just so that we have an idea of which areas in the country are likely to be covered.

There are very few species unique to the Gangetic plains. How can we make it different from our usual birding day.

I will participate in the Endemic bird count on 9th May from Akola of Maharashtra State India.

Thanks for the question. One idea is to try and find as many of those unique species as you can. Possible?

Hope you had a look at the list of endemics (225+) – all South Asia endemics and near-endemics are targeted – not necessarily endemic to Indo-Gangetic plains. I hope it will be quite a handful.

Please send me more material on this…

The designs for banners…do’s and dont’s etc.

Excellent news. Please do register your plans at the link above when you have the chance!

I will join with my friends from NIT Trichy, Tamilnadu.

join us for May 9 in Pangot, Jungle Lore Birding Lodge, near Nainital

I have data of bird census in the Districts of Ahmedabad, Mehsana, Sabarkantha, Banaskantha, Patan, Panchmahals, Patan and few places in Porbandar district of Gujarat probably from the year 1987 to 2000. I will try to give info. but it will take time.

That’s very interesting, Sir — and very kind of you to offer to share the information. In what format do you have the data? Is it perhaps already entered into Excel or some such form? Please let us know if we can do anything to help. You can email us at [email protected].

I will participate From Amravati,Maharashtra in E-Bird endemic bird count programme on 9 may with our WECS, Amravati Members.

Thank you Sir. Wishing you a wonderful day’s birding!

i will go birding on 9th May and participate in E-Bird endemic bird count programme.

Thank you, and looking forward!

It is great idea. My best wishes. Hope it will generate good data and excellent findings. I am sorry, that I miss the opportunity.

Thank you Dr Shaju. Even a 15 min birdlist in the morning, while it’s still cool, would be a wonderful contribution — if you have a bit of spare time!

I will be glad to participate

I will join this valuable movement.

I am participating since morning from Nashik, and Birding for the event.

where exactly do we have to upload the list of birds we saw?

Hello, please upload your list(s) to the global bird recording platform eBird (www.ebird.org). If you are new to eBird, please look at this beginner’s guide first.

Well I uploaded the list, but a few hours late, there was no internet. Lots of good endemics, though! 14 South Indian endemics recorded.

[…] a single record, are shown below. Interestingly the top 5 are exactly the same species as during last year’s Endemic Bird Day, in the same order except for White-cheeked Barbet dropping down to 5th from […]