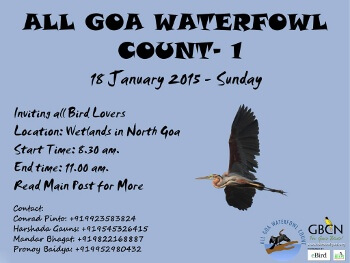 The first All Goa Waterfowl Count (AGWC) was held in two phases, on 18th January 2015 covering North Goa and 25th January 2015 covering South Goa. Teams comprising of expert birders and volunteers covered important wetlands in the two districts of the State on both the days conducting total bird counts. The count started simultaneously at all the selected wetlands on the appointed days. The aim of the AGWC is to systematically conduct surveys of wetlands of importance in the state which are host for migratory bird populations and to understand the the waterfowl population of the state at a base level.

The All Goa Waterfowl Count 2015 concluded with a total of 22 hours of observations being made throughout the state, 15.5 hours in North Goa and 6.5 hours in South Goa. An overall summary of the results is presented below.

Fig. 2 Distribution of Species Count and Effort from sites in two districts of Goa 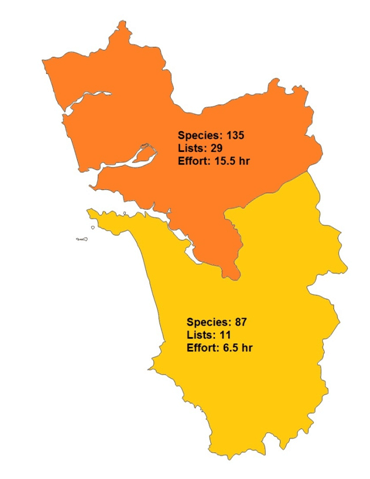 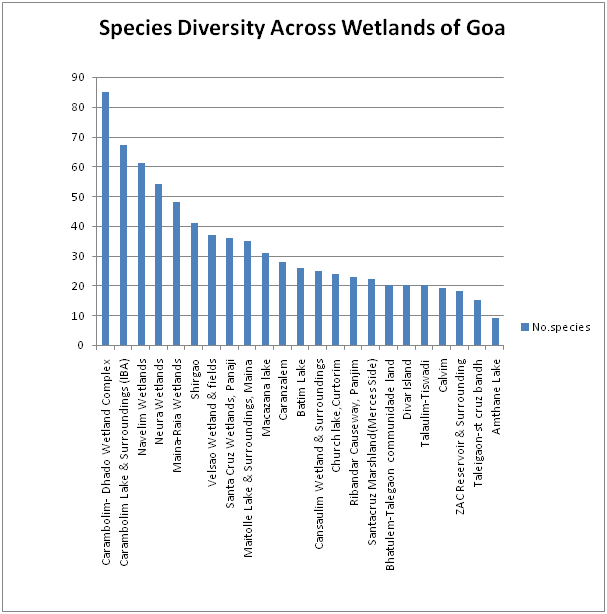 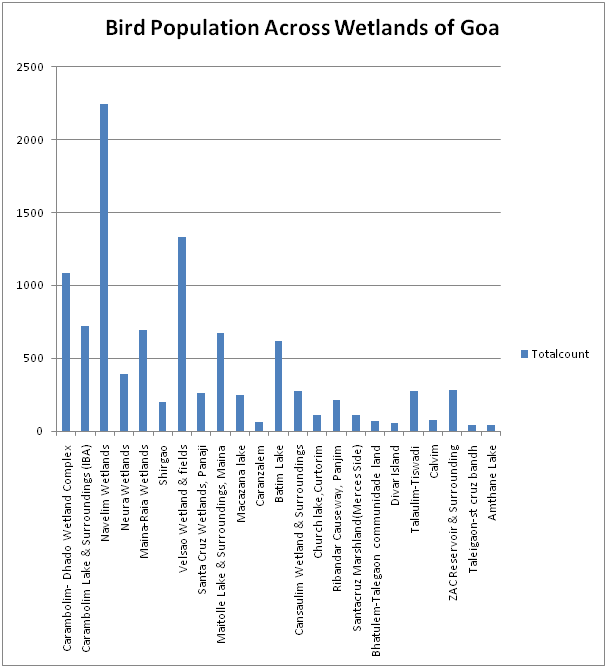 The above two charts give a fairly good idea of the status of the different wetlands across the state. The Carambolim- Dhado Wetland Complex in North Goa seems to have good species diversity with 85 species (Total Count) reported from the site, while Navelim Wetland in North Goa seems to hold a good bird population (2238 individuals), majority of them being waterbirds.

The Indian Pond Heron (Ardeola grayii) and Brahminy Kite (Haliastur indus) were found to be the most common resident birds of wetlands across the state, with these species being reported from 19 of the 23 wetlands surveyed, while the resident Lesser Whistling-Duck (Dendrocygna javanica) with 1229 individuals being counted across Goa from 12 sites, seem to have a good population. In the past though there are records of single sites holding more than 2000 individuals of the Lesser Whistling-Duck. Heinz Lainer estimates that in the year 2011, 35,000 individuals were present in and around Curtorim alone.

Below, a list of the most common birds recorded during the census of the wetlands in Goa is given. It is interesting to note that most of the common birds are resident birds.

Table 5. List of ten most common birds in the wetlands across Goa

The most interesting records from the AGWC 2015 are the sightings of the Pied Avocet (Recurvirostra avosetta) at Carambolim-Dhado Wetland Complex and the Eurasian Wigeon (Anas Penelope) at Batim Lake. The Pied Avocet was reported for the first time by GBCN member, Paresh Gosavii in 2012 from Carambolim- Dhado Wetland Complex and was a new record for Goa then. After a year’s (2013) gap, the Pied Avocet has visited the State again. The Eurasian Wigeon on the other hand was once a very regular winter visitor to the state but in recent years their sightings have reduced. Till 2001 Carambolim Lake was the most frequented spot but in recent years the Wigeons frequent the Curtorim Lake more often (Lainer & Alvarez, 2014).