Note: some of the animations in this post are large files, and may take a few minutes to load.

Bird migration is one of nature’s great wonders. But despite a long history of research on migration, there is still much to learn! In this article, let’s take the opportunity to explore how birdwatchers have helped better understand migration of Indian birds.

Back in 2007, a citizen science project called MigrantWatch started asking birders in India to report dates of first and last sightings of migrant birds. One species of interest was Rosy Starling, which winters almost entirely in the Indian subcontinent.

Based on the data available then, MigrantWatch showed that Rosy Starling has a relatively slow migration from the northwest, gradually trickling down to southern India. 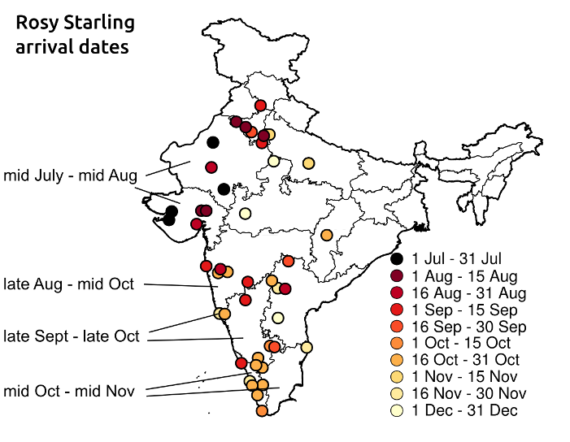 Arrival dates of Rosy Starling, as compiled by MigrantWatch in 2013. Click on the map for more details.

As part of MigrantWatch’s Pied Cuckoo Campaign, data were gathered to illustrate the migration of this species with respect to monsoon rains.

It seemed as though Pied Cuckoos do indeed herald the monsoon. (More about this below, with more data!)

Pied Cuckoo in relation to the monsoon, based on 300+ sightings compiled by MigrantWatch in 2011. For more details, click on the map.

Since 2014, Bird Count India has been encouraging Indian birders to upload their bird lists to eBird, and this has resulted in hugely increased amounts of information becoming publicly available.

With the increased volume of information, how does the Pied Cuckoo-and-monsoon story look? Using sightings accumulated until 2017, MD Madhusudan revisited the Pied Cuckoo question and created this wonderful animation showing how Pied Cuckoo sightings (red dots) and rain (grey-blue regions) are related: a further demonstration of the truth behind the folklore that the species heralds the monsoon rains.

Like with the Pied Cuckoo, it’s now possible to illustrate the migration of many Indian species. See, for example, this animation of the migration of Verditer Flycatcher between the Himalaya and the peninsula.

Since eBird is a global tool, it is also possible, for the first time, to visualise the larger patterns of movement of birds that migrate to India, or move through in passage.

We start with Bar-headed Goose, an iconic species for us in India.

Note that almost the entire population winters in the Indian subcontinent (if one ignores the population in Europe, recently established by escaped birds). Note also the three regions where breeding is concentrated: Ladakh, Qinghai (central China) and Mongolia.

Let’s examine a few other migrants that winter predominantly in the Indian subcontinent. The Blyth’s Reed Warbler is a familiar winter migrant to many parts of India.

It has a huge breeding range, but in the winter  virtually the entire population funnels into the subcontinent.

A species pair that we often find hard to tell apart (see our guide to identification) is Green and Greenish Warbler.

Considered the same species until a few years ago, they often winter side by side in India, but then Green returns to its restricted breeding grounds around the Caucasus mountains (between the Black and Caspian Seas), while Greenish spreads out far and wide across Eurasia.

A very distinctive species, famous for its ‘murmuration’ at roosting sites around dusk is the Rosy Starling. Again a species for which India is extremely important in the winter.

A few species occur on India only on passage. Where do they come from and where to they go? Here is the global migration of the European Roller and the Amur Falcon.

European Rollers have a large breeding range, with the western birds migrating straight South, and the eastern populations passing through India before making the ocean passage to Africa. Amurs famously fly through India on passage from their breeding range in China, on their way to their winter grounds in southern Africa.

Birdwatchers’ observations have also helped uncover and clarify migrations that are more local. For example, did you know that Black Kites move away from Goa (and several other parts of the West coast) during the monsoon, and return afterwards? 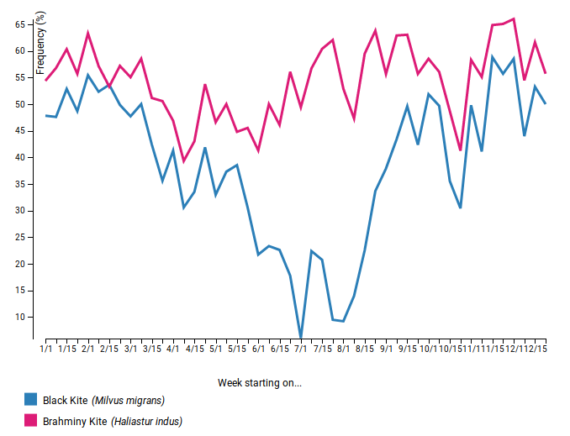 Seasonal changes in frequency of reporting (percent of lists) of Black Kite in Goa as of 2019. Note how reporting frequency drops from June to September. By contrast, Brahminy Kites show relatively constant reporting through the year. Explore the patterns here.

Or that Cattle Egrets move out of and into Bangalore city on a seasonal basis? 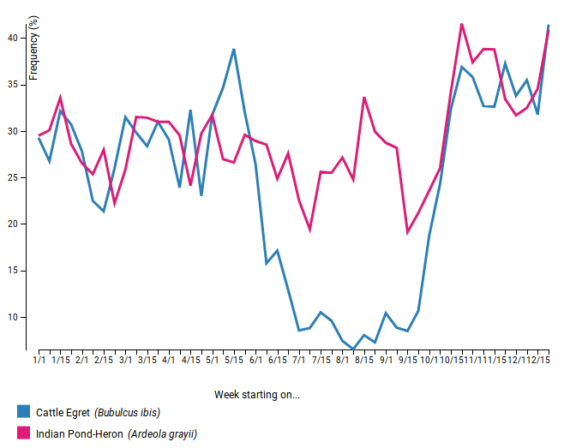 Seasonal changes in frequency of reporting (percent of lists) of Cattle Egret in Bangalore as of 2019. They seem to leave the city in June, returning in September. In contrast, Indian Pond-Herons don’t show much of a seasonal pattern. Explore the patterns here.

We can also see elevational migration in more detail. For example, see how Grey-headed Canary-Flycatcher moves up and down the Himalaya in Uttarakhand as the seasons change (graph as of 2018). 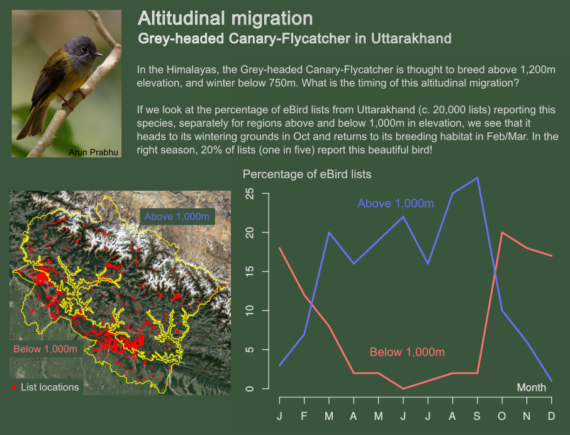 All this and more has been made possible through the contributions of thousands of birdwatchers from across the country and the world. If you are already part of this, thank you for your efforts! If you are new to birding, take a look at our series on getting starting with birding. If you’re already a birder, try taking eBird for a spin!

With the participation of more and more birders, we should soon be able to make detailed migration maps for Indian species, like those now available for North American birds. See the video below to get a taste of what might be in store! More details here.

Note: if you can’t see the video above, please click here.

If you enjoyed this post, do take a look at this detailed long-form article on the variety of ways in which local groups and researchers are making use of the information contributed by birders.
Birds in Data: Counting Cuckoos and Other Stories, by Shamsheer Yousaf in Factor Daily.